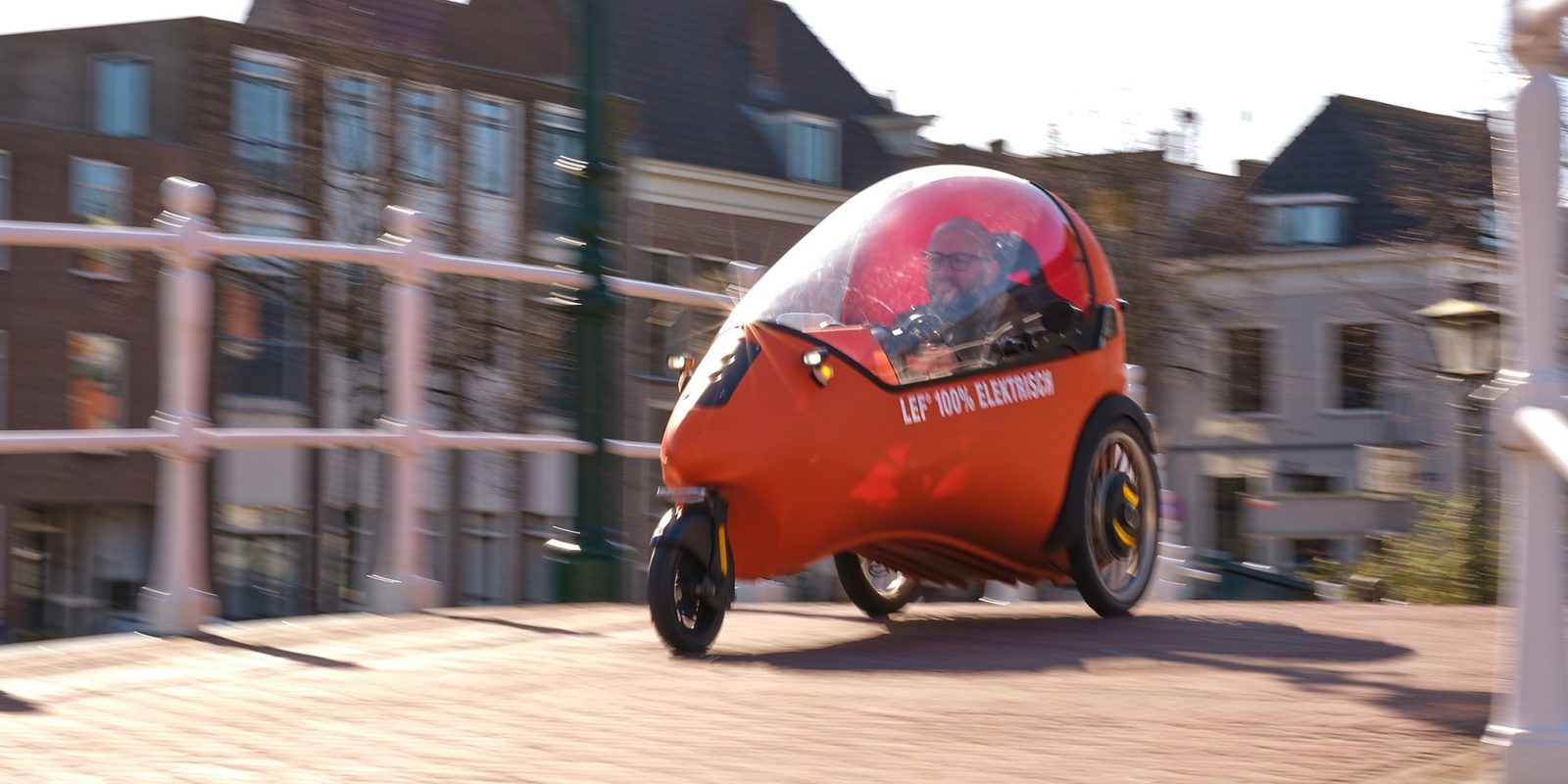 I know, I know. It looks like another one of those funny electric velomobiles or e-bike/pedal-car hybrids. But the LEF is neither. Instead, it’s a micro EV without even a hint of pedals.

Riders (or I guess, drivers?) simply pop the fighter jet-style canopy, hop into the upright seat and engage the throttle to take off. The handlebars even retract out of the way to make entering and exiting easier.

There are no pedals, meaning this is a purely electric vehicle. Without needing the space for a full pedal arc up front, the LEF is much more streamlined than most bike-car hybrids we’ve seen before.

The LEF, manufactured by Netherlands-based EV Mobility, has the all-weather advantage of enclosed vehicles, yet the small size of a pedal car.

And despite its small stature, the LEF is actually rated to carry up to 200 kg (440 lb). With 50L of storage space behind the rider, most users will likely run out of storage volume before approaching the weight limit.

The three-wheeled LEF is described by the company as being safer and more comfortable than traditional bicycles and scooters. They claim that the stability of three wheels and the fully-enclosed design are more protective in a crash than open two-wheelers.

While a tricycle setup with two rear wheels is notoriously unstable in high speed turns, the LEF’s legally-mandated top speed of 25 km/h (15.5 mph) means you likely won’t be able to corner too aggressively anyways. The peak rating of 1,000 watts of power per rear wheel though should still provide good acceleration and hill climbing performance.

That lower top speed helps the little EV offer plenty of range for the city. A standard 48V and 10Ah battery provides up to 30 km (18 miles) of range. For even more range, the LEF can support two additional battery packs to boost riders up to 90 km (55 miles) from the combined 1.44 kWh of capacity.

EV Mobility claims that the LEF can be ridden in bicycle lanes or on streets. However, I can imagine that cyclists aren’t going to be too pleased to share their lanes with micro EVs like these.

You can see the LEF in action in the video below.

Obviously this isn’t going to be a great solution for anyone needing to travel on faster roads or to carry a passenger. But niche micro electric vehicles like these can serve as great second (or even first) cars for many people living and working purely in urban areas.

They are easy to park, take up much less space than a traditional vehicle and cost pennies to operate.

In fact, they don’t even cost as much to purchase as I had feared. The base model starts at €4,380 (approximately US$5,300). The now-defunct ELF electric pedal car that used to be offered in the US reached nearly twice that price.

In general, I love the idea of micro EVs.

I think the LEF is definitely a step in the right direction, though there are some things I’d love to see changed.

I’m more of a tadpole trike guy, preferring two wheels in the front. Though I can see how that would complicated the aerodynamic design of this vehicle, not to mention the steering.

Part of the low price here is that standard delta trikes like this are cheaper to produce. Steering one wheel is simpler and thus cheaper than steering two and dealing with the associated geometry considerations.

But even in its present form, there’s a lot to love here.

While I’d wager that it probably won’t fit the lifestyle of most people, I’m sure it will for some. And each of those people could take a car off the road, which benefits everyone.

I’d love to see both the introduction of more micro EVs and the infrastructure needed to safely use them.