Juiced HyperScrambler 2 review: At 32 mph and 100-mile range, is it ebike or emoto? 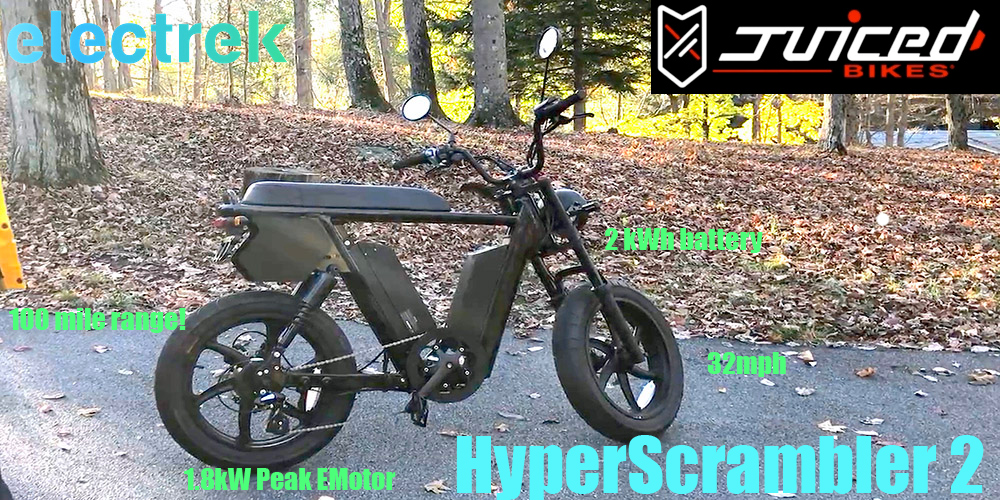 I’ve had the Juiced HyperScrambler 2 for over a month now, and every time I ride, I find out something interesting about the ebike/emoto hybrid. On most of those days someone asks me, “What the heck is that awesome thing you’re riding?!” and “Where I can get one?” The second part is easy — JuicedBikes.com. The first part? Let’s take a look.

HyperScrambler 2 out of the box

Like my other two Juiced bikes, the HyperScrambler 2 comes 90% assembled in a normal, albeit heavy, doubled-up bike box. You just need to attach the front wheel, handlebars, pedals, and a few other small things like mirrors and stickers. If you allow for 30 minutes to an hour, you can probably take your time with the assembly, and Juiced conveniently includes all the tools you’ll need. You might want to enlist someone who can deadlift 120 pounds or prepare to cut that double box down the sides.

It never hurts to go over the bike, making sure all screws are tightened and everything is solid. All three bikes I’ve got from Juiced have all come without any loose screws or defects, but you’ll be riding this thing at over 30 mph, so safety is important.

The HyperScrambler 2 is based on Juiced’s older model, the 750W geared Hub (1,300W Peak) Juiced Camp/City Scrambler ($1,599) which has been around for two years and was Juiced’s answer to the Super73/Mini bike craze. Juiced notably put more power and range in the original Scrambler than most Minibikes. With the standard 52V/13Ah battery, it was able to go an optimistic 45 miles on a charge (plus some pedaling).

Where the Scrambler line really stands out from the pack is that it sits way higher than most 20-inch wheeled mini bikes, allowing even relatively tall people to get more leg extension, and together with its tapered long banana seat allows for a much better experience when pedaling. As someone who has ridden a bunch of mini bikes and loves to actually pedal, this is a big deal. Also, that long banana seat makes towing a second rider easy.

There was a brief HyperScrambler (and why this bike is called the “2”?) that suffered from some controller issues and wasn’t widely distributed.

Besides the upgraded drivetrain and specifically the powerful 1.7+kW peak motor and 13 to 19.2Ah battery, you’ll note the rear suspension was added to the HyperScrambler 2. That, along with the front suspension, allows for much better bumpy-road stability at higher speeds. It also gets that halo front light that gives it that retro bike look and really lights up the road ahead. In fact, that light along with the great brakes saved my backside during a recent night ride where, at over 30 mph, a deer jumped out in front of me.

A cheaper bike with mediocre brakes and lighting would have had me over the handle bars (note this was on the similar specced HyperScorpion). Worth the money right there.

Sadly, however, this doesn’t result in much more power output, it’s just for the long haulers who need the ability to go 100 miles on a charge.

Although I still maxed out at around 1.7+kW on the HyperScrambler 2, just like the HyperScorpion, I was able to keep that high-end output power for much longer. Juiced has a load balancer that automatically draws power evenly from the two batteries. Since the two batteries aren’t allowing any more power to be added to the motor, you can simply turn one off if you only want to drain one at a time. That way you only have to charge one at a time.

You’ll also notice that the HyperScrambler doesn’t have a rear rack or wheel fenders like the Scorpions. If you need the storage or to ride in the rain, Juiced designed a custom rear rack and fenders for the HyperScrambler 2, and it’s offered as a separate accessory. I didn’t find either necessary, and even on wet pavement, didn’t get much splash from the smooth street tires.

About that 100-mile range

You can absolutely go 100 miles with the two-battery HyperScrambler 2. But that will require a healthy amount of pedaling, avoiding huge hills and keeping the speed at or under 20 mph, which would make it a 5+ hour ride. I don’t think that’s what the second battery is for in this case.

If you’re gunning it all the time (and real talk: You will be, it is so friggin’ fun) through hills at over 30 mph and use the pedals as pegs, you are going to get about 20-25 miles per battery. That’s still outstanding, especially for a bike this heavy. But I think owning the second battery is to get closer to 50 miles of range when gunning it all the time. At least that’s my experience in a month plus.

Alternatively, if you live in an apartment and don’t want to have to charge your batteries every day, you can probably get by with charging these batteries around once a week with a 10-20 mile commute. One can live on the charger while the other is on the bike.

The $2,499 HyperScrambler 2 comes with a 52V 19.2Ah or 1kWh battery and can be updated to two for another $500. This is a huge ebike battery and comes in at around 12 lbs each, bringing the total weight of the bike to over 120 lbs. For this reason, I often only ride with one battery while the other is charging unless I’ve got a really long trip ahead of me.

The batteries are keyed and relatively easy to remove (with two hands) and can be charged on the bike or off via the 2A charger(s) included via XLR port. You can upgrade to an 8A charger (or buy fast 4A XLR charger online for $50), which will fully charge the battery from empty in about two hours. Otherwise, you’ll want to go overnight (7+ hrs) from empty to full. Putting about 10 miles of range on the batteries takes about an hour.

For my purposes, I could get by with one battery, and I think a lot of you reading this are in the same boat, but I have to say the “range anxiety” element disappears right out the window, never to return with two batteries.

Juiced HyperScrambler 2 on a commute

I have about a 7-mile, extremely hilly commute to my work spot (which I have been mostly avoiding since COVID). On flat surfaces and downhills I can usually hit about 33 mph or more. The steep uphills I drop down to around 20 mph with a little pedaling included.The extra weight of the second battery plays in here and I think slows me down more than the HyperScorpion’s single battery.

The Tektro 2-piston hydraulic disc brakes and 180 mm rotors slow this heavy bike down quickly and efficiently. I have full confidence that these will slow the bike down even at 30+ mph speeds, but Juiced could have inspired a little more confidence with a bigger set of brakes.

I’ve heard some internet complaints about the 20” x 4-1/4” Innova puncture-resistant street tires, and I really don’t understand it at all. I’ve never slipped once unless I wanted to (see end of video above). The street grip is solid and I don’t skid out, even when putting all 1.7+kW of that Bafang motor into the pavement.

The tires are set on standard-size mag wheels, so a lot of other options exist out there. I don’t often take the HyperScrambler 2 off road or out on rainy or icy days, either. If I do, I might hook up with these $33 winter upgrades.

As a 47-year-old 6 footer, I have no problem throwing my leg over the banana seat. Even my 12-year-old son who is about 5’1″ and my few inches taller wife don’t have an issue getting on or pedaling. People with longer legs can simply slide back in the seat.

The problem comes in when there is a backseat rider. At that point, I’m moved toward the front, and my legs can’t extend far enough to pedal comfortably. This is when the throttle is your friend.

The throttle is a twist grip, and it lays all of that power down at once, rocketing the ebike forward fairly quickly. I recommend trying ECO mode first, which keeps it below 750W and 20 mph, also classifying it as a Class 2 ebike. You can work your way up to “R” mode from there, which if we’re being honest with ourselves, is where it will mostly stay.

Is HyperScrambler 2 an ebike or an emoto or something in between?

That’s hard for me to say. You certainly can pedal it like a bike without any power at all. You can ride around in a mode that should allow you to ride on class 2 ebike paths as well. And it is certainly useful and fun in those modes.

But this thing was built to blur the lines between a motorcycle and a bike. Country roads demand a little more speed, and I actually feel a whole lot safter traveling over 30 mph than I would at 20 mph. The size of this thing with its big wheels and rearview mirrors demands that cars treat you like an equal.

You don’t want to ride this like a bike, you want to ride it like a motorcycle. The “vestigial” pedals are more like oddly spaced pegs.

I mentioned the rack and the wheel fenders earlier, and those are going to be great for storage and wet weather. One thing that definitely added to the package is the $40 Motowolf phone holder. Normally meant for motorcycles, and heavy duty metal, this can either go on the handle bars or the frame, it comes with a 5V, 1A bypass line that you can put on the USB charger. It’s big enough for even Apple’s biggest, the iPhone 12 Pro Max.

Final thoughts on the HyperScrambler 2

As you can see in the video, this ebike is just amazing. It’s great on the open road, it’s a great commuter, and most of all it’s just great fun riding around. I thoroughly and truly enjoy this bike to the point where if we’re going to our friends’ house (socially distanced, of course), I let my family take the car and I follow on the HyperScrambler 2. It makes every journey exciting, memorable, and a ton of fun.

Sure, there are some nitpicks. The ignition is in a weird place (which can have benefits — security by obscurity!). The huge batteries are very heavy and therefore so is the bike. But that’s the tradeoff!

Probably my biggest issue with these moto-ebikes is a strange one. It’s that I don’t get a great workout on them. With my 250W “European ebike,” most of the work is coming from my legs, and theoretically that keeps me healthy. The HyperScrambler 2 isn’t giving me a workout. I do pedal often and it’s easier with this bike than any other mini ebike. But am I really getting a workout here? Probably not.

But that said, this bike and the Juiced lineup of Minibikes is really changing the game in a big way. Imagine a world where people rode these things around cities instead of cars. Where everyone is breathing clean air, appreciating open spaces, and having fun instead of being closed up inside a glass and steel cage. Sign me up for a Juiced utopia!

Grab yours — it makes an amazing holiday gift, and it ships in January for $2,499.