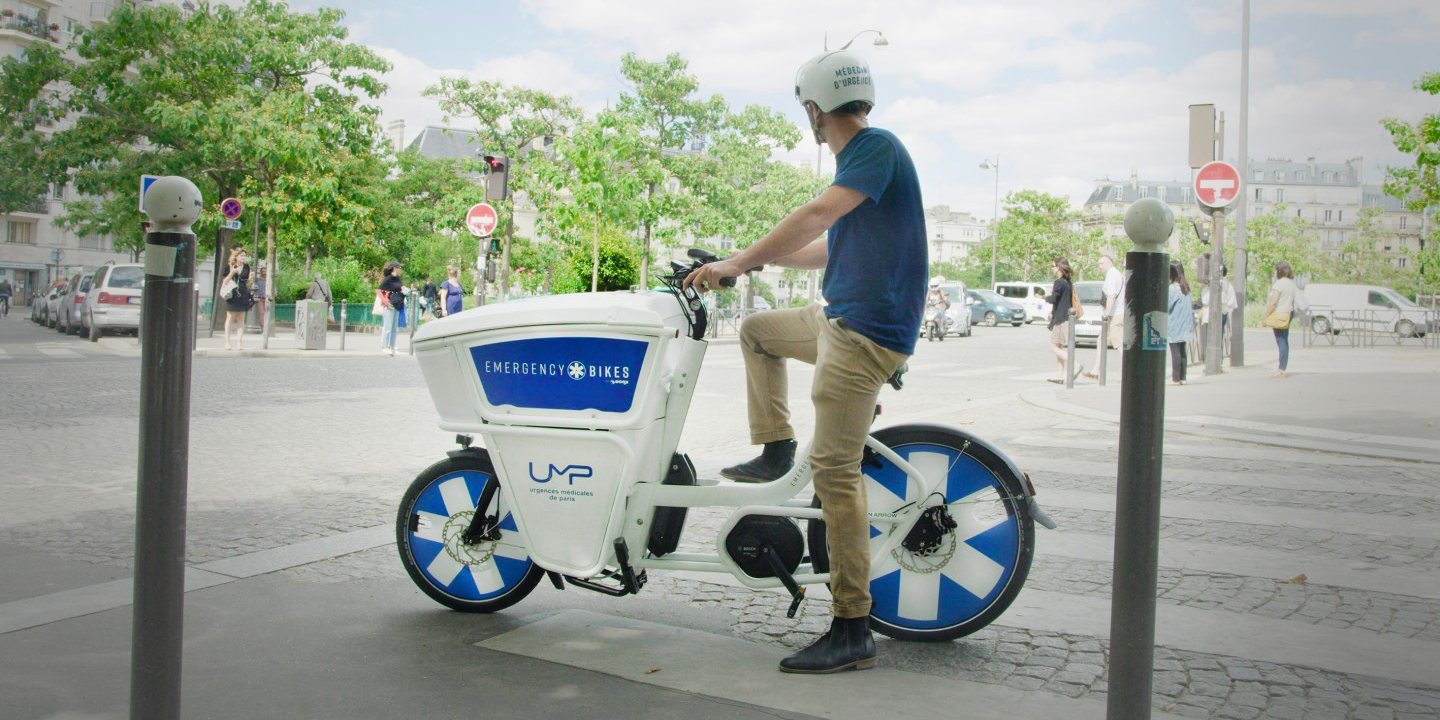 Bicycles, and especially e-bikes, are often the quickest way to cut through urban traffic. And so it makes perfect sense to see them being transformed into ambulance e-bikes for first responders.

That’s exactly what a team at the tech firm Wunderman Thompson Paris set out to do when they designed their own electric bicycle ambulance.

An Urban Arrow front-loader electric cargo bike was used as the foundation for the ambulance.

Powered by Bosch mid-drive motor, the electric bicycle ambulance uses a pair of 500 Wh batteries to ensure it won’t run out of juice while en route to an emergency. Together, the dual batteries provide up to 160 km (100 miles) of range from the pedal-assisted e-bike system.

The narrow bike uses only two wheels instead of a common three-wheeled cargo bike setup we’ve seen much of lately, helping it maintain a nimble ride and the ability to weave between cars. But to fit everything that a first responder paramedic might need in order to deliver critical first-aid at the scene of an emergency, an insulated 150 liter (5.3 cubic feet) cargo box was added to the bike.

Other ambulance-specific additions include a 140-decibel horn, blue medical symbols within the wheels, and a blue flashing light to alert motorists to the novel e-bike’s emergency vehicle status.

Wunderman Thompson says the emergency e-bikes are currently available for use by emergency services.

A local Paris doctor even purchased the first production unit and uses it personally to respond to emergencies, according to Newatlas.

That gives them time to stabilize patients while a conventional ambulance is still arriving and have the patient prepped for transport right away.

See the ambulance e-bike in more detail in the video below.

This is a great idea and further demonstrates the many uses of cargo electric bicycles.

Even as an electric bike/motorcycle evangelical, when seconds and minutes count towards saving lives, I’m not too worried about the gasoline being burnt by these ambulance scooters. But if the gas scooters can be complimented by electric bicycles that are even more nimble and able to more easily cut through traffic, then all the better.

I’ve even recently seen electric micro-cars used by paramedics here, which give some of the same benefits, though still seem to get stuck in our notoriously rough traffic sometimes.

These smaller EV ambulances have their own unique advantages, including the ability to carry a second paramedic as well as larger medical equipment, but ambulance e-bikes can still usually arrive on scene faster to begin initial first-aid.

Ambulance e-bikes that can deliver critical first-aid seem like exactly what paramedics need in such densely populated urban areas.