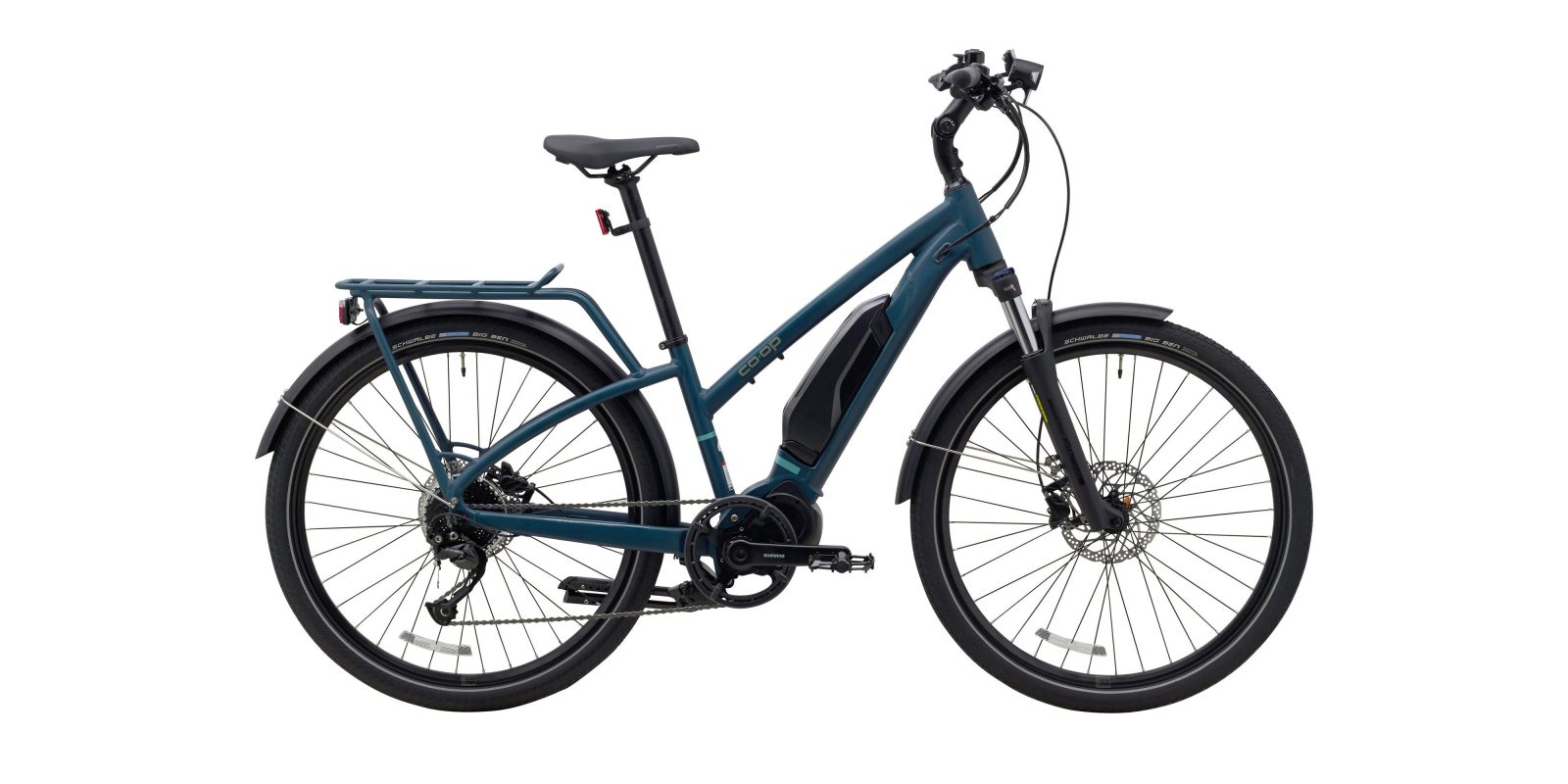 REI has now joined a long list of brands getting in on that lucrative e-bike action as the company’s Co-op Cycles line adds two new electric bicycle models: The Co-op Cycles CTY e2.1 and CTY e2.2.

Co-op Cycles is REI’s own bicycle brand that has traditionally focused on entry-level and mid-range bicycles.

Now REI has just announced the first ever e-bikes being added to the Co-op cycles lineup.

Both of REI’s new electric bicycles actually share a lot in common.

The frame design is best classified as a mid-step since the top tube is angled lower to make for easier mounts and dismounts. The bikes come in Small, Medium, and Large frame sizes, with the Small size offering a more pronounced step-through design for short-legged riders.

In fact, the Shimano motors and battery systems are the main difference between the two models. The Co-op Cycles CTY e2.1 sports a Shimano E5000 motor and 418 Wh battery, while the CTY e2.2 is rocking a Shimano E6100 motor and larger 504 Wh battery. Both of those motors help the bikes top out at 20 mph (32 km/h), but the e2.1 only outputs 40 Nm of torque while the e2.2 has a more sprightly 60 Nm of torque.

The Co-op Cycles e2.1 is priced at US$1,799 while the e2.2’s higher torque and larger battery commands a higher price of US$2,199. The e2.2 also nets you included front and rear fenders, which can be worth their weight in gold for commuters in rainy areas.

While US$1,799 isn’t the most affordable mid-drive e-bike we’ve seen yet, it’s pretty darn close. And with the Co-op CTY e2.1 and e2.2, you also get several components that you won’t find on budget-level e-bikes.

Also included on both models are a center kickstand for increased stability, 27.5×1.95 Schwalbe tires, adjustable stem, front and rear LED lighting, and a memory foam saddle.

Co-op Cycles bikes are designed with input from REI members, and the line continues to resonate with the co-op community as the line evolves. In a year where bicycle sales have nearly doubled for the co-op, we’re thrilled to bring these brand-new styles to our customers just in time for fall fun and freedom on two wheels.

E-bikes are here to stay, and they are so much fun. We know e-bikes are helping people get outside quickly, more often and closer to home. They are great as a recovery option post-injury or a fun and accessible way to start riding for the first time and they are a planet-friendly transportation alternative.

As Class 1 e-bikes, meaning the electric assist cuts out above 20 mph (32 km/h) and the e-bikes lack a hand throttle, these models should be legal just about anywhere standard bicycles can ride. And with increased trail access across the US for e-bikes, hybrid-style bikes like these could make great dual-purpose commuter and recreational e-bikes.

Let us know what you think of REI’s first electric bicycles in the comment section below!