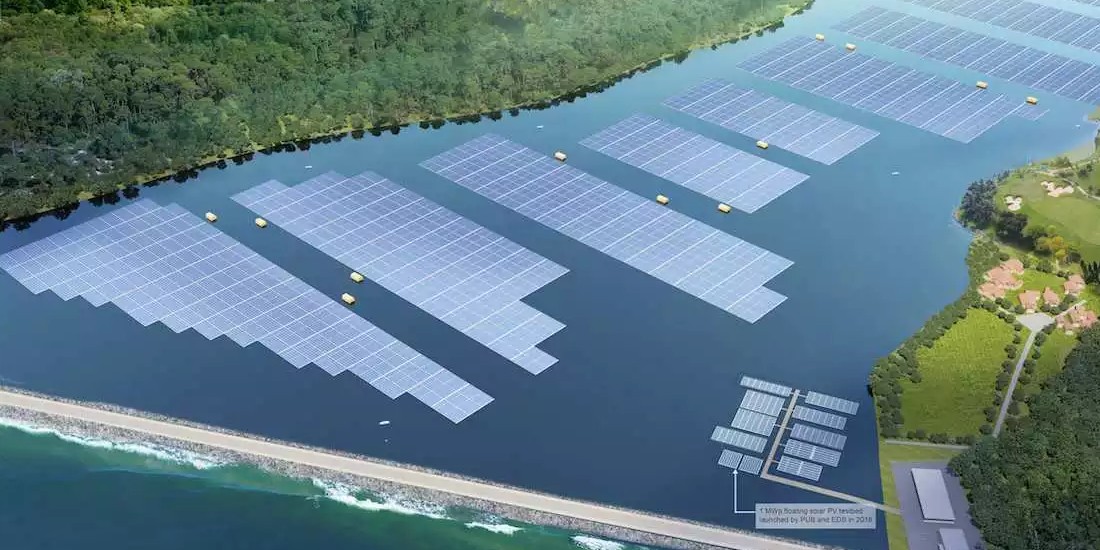 Singapore’s Public Utilities Board (PUB) and marine and utilities group Sembcorp Industries have begun to build a 60 megawatt-peak (MWp) floating solar photovoltaic farm. It’s on the Tengeh Reservoir in the Western Water Catchment in the West Region of Singapore.

Singapore has opted for a floating solar farm because the island has a scarcity of land. The solar farm will occupy an area equivalent to 45 football fields when it’s finished. It will power water treatment plants and offset 7% of the PUB’s energy needs. It will go live in 2021.

PUB said that the solar farm will “have minimal impact on the reservoir’s water quality and biodiversity.”

A study from the Norwegian Institute for Nature Research found that painting one out of four white wind turbine blades black reduces the amount of birds killed by the blades by 72%.

Why does this work? The scientists say it’s because of something called “motion smear.” The movement of the all-white blades makes them appear invisible to birds, who have excellent peripheral eyesight, but they can’t see as well when they look forward. So having one black blade is easier for the birds to spot.

The study, which is published in Ecology and Evolution, was conducted on Norway’s island of Smøla for 7.5 years before the blades were painted, and 3.5 years after treatment.

Of the eight turbines used in the research, four were painted and four were left bare. There were a total of 1,275 searches conducted for dead birds between 2006 and 2016. The birds that benefited the most from the painted blade were large birds and birds of prey, such as eagles and vultures.

Oxford PV has discovered that coating solar panels with a thin layer of perovskite crystal increases power generation because perovskite is able to absorb different parts of the solar spectrum than traditional silicon.

The mineral perovskite, also known as the crystal calcium titanate, was first discovered by a Russian mineralogist in the Ural mountains in 1839. In the last 10 years, scientists around the world have been locked in a race to engineer chemical compounds based upon the perovskite crystal structure but that are able to generate more renewable electricity at a lower cost.

Oxford PV aims to start manufacturing the perovskite panels by the end of 2020 and start selling them within the next year.