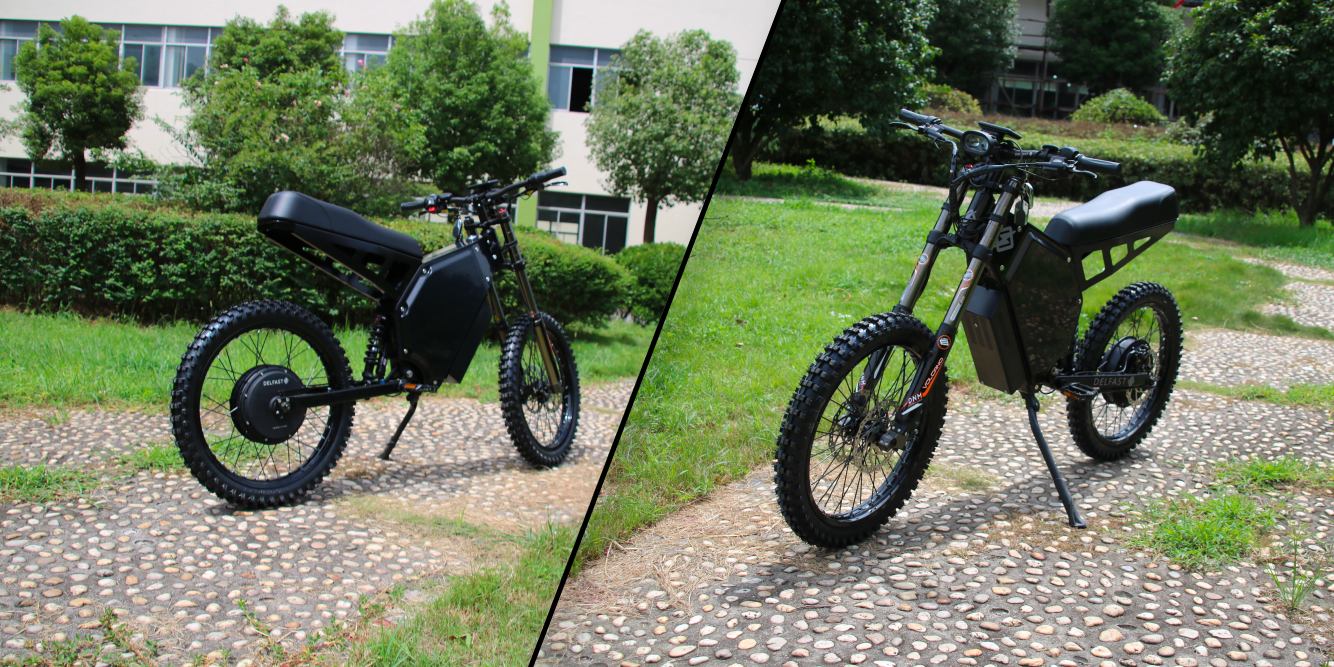 And you’re definitely going to want to see the specs this new e-bike is packing.

First of all, you should know that Delfast is playing fast and loose with the term “e-bike.”

Just like Delfast’s other 80 km/h (50 mph) police-edition “e-bikes” and the company’s high-power consumer “e-bikes,” the new Delfast Cross Dirt has handlebars, two wheels, and pedals, but that’s pretty much where the bicycle components end and the light motorcycle realm begins.

And when you check out the performance specs of the bike, the picture becomes even more clear.

The bike is available with two battery options. The smaller of the two batteries is still fairly huge at 1.9 kWh. Delfast rates it as sufficient for 120 km (74 miles) of range when riding at slow-ish speeds (likely around 32 km/h or 20 mph). But you could also opt for a certifiably gigantic 2.76 kWh battery pack rated for 280 km (174 miles) – but again those ranges are calculated at slower speeds. The batteries feature Bluetooth BMS modules to allow the user to monitor battery health at the cell-level via their smartphone.

For anyone that doubts Delfast’s range capabilities, you can take your complaint up with Guinness World Records. Delfast set the record for the longest-range production e-bike when a different model rode 380 km (236 miles) after having its pedals removed to ensure the ride was performed entirely on battery power.

The Delfast Cross Dirt is built on an enduro-style frame that the company backs with a lifetime warranty. The bike sports DNM suspension, moto-style saddle, 19″ moto wheels with sand/off-road tires, dual-piston hydraulic disc brakes with large 203mm rotors in the front and rear, and high/lo beam lights for riding off of the beaten path.

The bike also includes a built-in alarm and GPS tracker (though you have to provide your own SIM card if you want the bike to phone home and let you know where it is).

Delfast is positioning the Cross Dirt electric bike as a competitor to the highly popular Sur Ron electric trail bike, based on marketing from the company’s site.

That’s going to be a bit of a tough sell since the Sur Ron already comes with a highly-respected reputation, solid distribution network, a huge community of modders, and aftermarket parts.

But Delfast makes the case that despite the slightly higher price (€3,699 or approximately $4,370), the Delfast Cross Dirt includes other advantages such as built-in pedals and a larger battery option.

Can Delfast take on the Sur Ron? That’s going to be a tall order, but we’ll wait and see once the first bikes start making deliveries after production begins in September.

Until then, let us know what you think. Does Delfast stand a chance against Sur Ron? Sound off in the comment section below!