BMW is developing an interesting electric scooter with a roof, airbags, and active aerodynamics 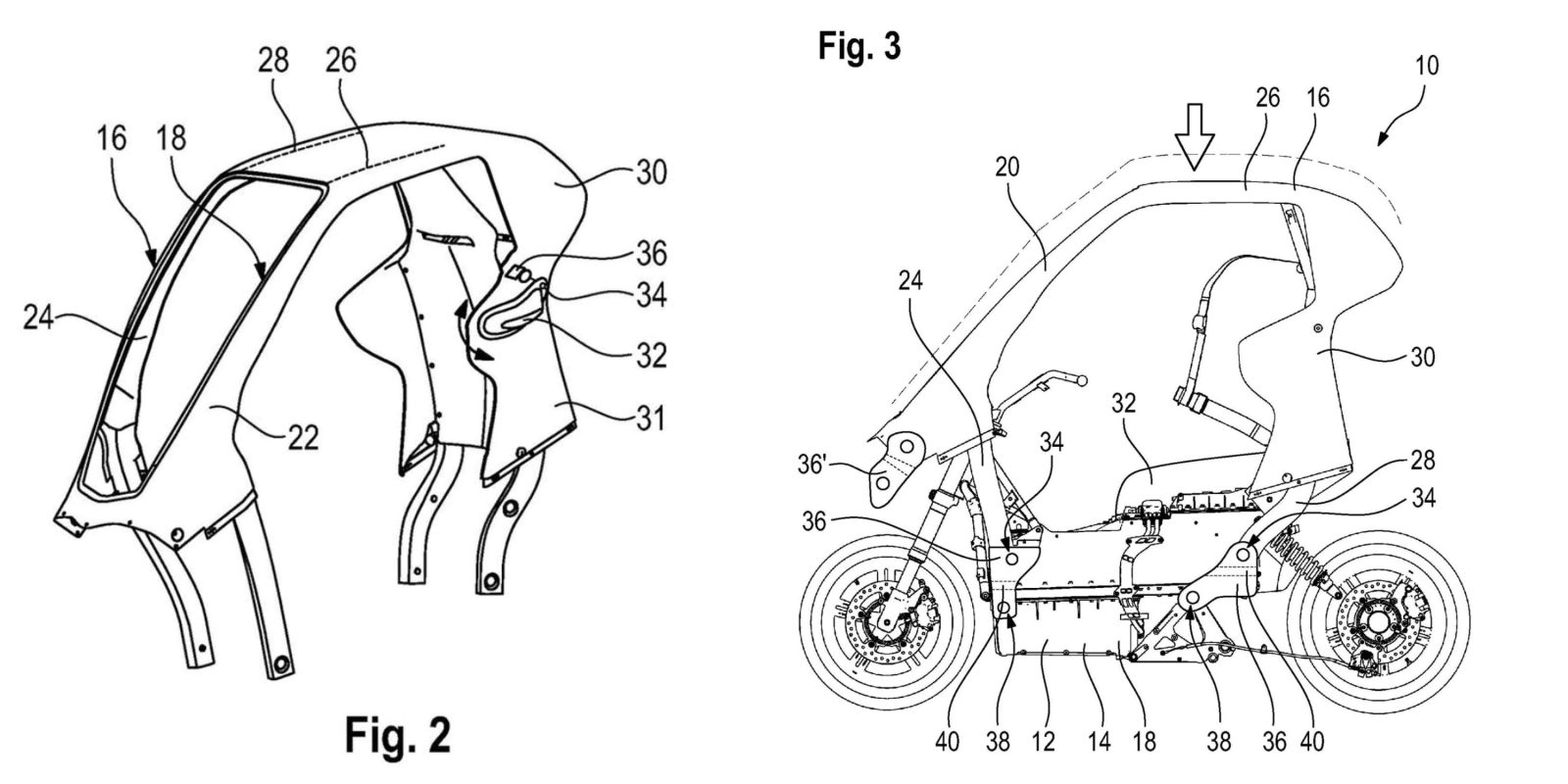 For over a year now we’ve been following BMW’s increasingly interesting patents on a redesign to the company’s popular C Evolution electric scooter. The latest updates show that BMW is working on turning the scooter into a seriously high tech commuter vehicle that leverages many of the technologies found in traditional cars.

The latest updates to the design indicate that the covered scooter will likely feature crumple zones that can help improve the scooter’s safety in a crash, all the more important considering that the design includes a 4-point harness that holds the rider in the carbon safety cell comprised of the seat and roll hoops.

The crumple zones are designed to allow the roof of the scooter to give, crushing downwards by a few inches and absorbing an impact to the top of the vehicle – the kind of blow it would receive if knocked over and sliding top first towards a hazard.

Patent drawings show multiple crumple zones (item number 40 in the image below) that appear to be removable and replaceable, thus helping return the scooter to the road without totaling it during a crash.

The crumple zones would be connected to a pair of carbon fiber roll hoops comprising the upper roof of the vehicle.

The use of carbon fiber would help reduce the roof’s added weight, though even a lightweight roof will still act as a large sail in crosswinds.

To solve that problem, BMW’s engineers took a lesson straight out of aviation by designing in active aerodynamics via adjustable winglets. Mounted to the sides of the canopy’s uprights, the winglets act like ailerons and will be computer-controlled to automatically adjust their angle of attack to counterbalance the force of side winds on the canopy.

Another safety advancement included in the updated covered electric scooter is the use of airbags. We’ve seen motorcycle jackets with built-in airbags before, as riders rarely stay with the bike during a crash.

But with the inclusion of a 4-point harness, the BMW covered electric scooter intends to hold riders within the safety cell in the event of a crash and cushion them with multiple airbags.

Side airbags are mounted on either side of the rider from the bottom of the seat to the rider’s shoulders. Rear impact protection is also provided via inflatable sections in the back of the seat, which is attached to the canopy instead of the scooter’s lower frame.

By including the seatback in the canopy instead of fixed to the lower frame, the entire canopy is apparently removable. By unscrewing a few bolts, the canopy can be separated from the scooter, taking with it the airbags, winglets, seat back, and windscreen. Thus, it is a rather simple operation to convert the scooter from a covered scooter to a standard scooter – effectively turning it into a convertible.

The various design updates to BMW’s covered electric scooter span over a dozen patents from the last year. We don’t yet know if or when this vehicle will reach the market, but it looks like BMW has put a serious amount of effort into it so far, bolstering the chance that we’ll actually get to see the drawings come to life at some point.