We finally got our hands on a Tesla Model Y and tested it on a road trip as a first drive experience with the electric SUV.

Here are my thoughts on what I think could be a very important vehicle for the electrification of the auto industry.

Due to the Model Y launching amid a global pandemic, it took us a while to get behind the wheel of the new electric vehicle, but we finally did it.

Electrek’s Seth Weintraub is taking delivery of his own Model Y in the coming days and we plan to deliver a full review of the new electric SUV in the coming weeks after putting some miles on the car.

In the meantime, I took a Model Y on a road trip from Oakland, California to Sonoma and Napa over the last week to get a first impression and road trip test.

Below you will find my written report and here’s a quick video about my experience with the Tesla Model Y on the road trip:

Let’s get this one out of the way.

Over the last few months, we have been reporting on new Tesla Model Y owners having quality issues on their new cars – often leading to them having to refuse delivery.

In this case, the owner told us that he had two issues with the car. There was a scratch on the backseat big enough that Tesla replaced the whole seat and there was a misalignment of the trunk.

Tesla adjusted it, but it is still not perfect. 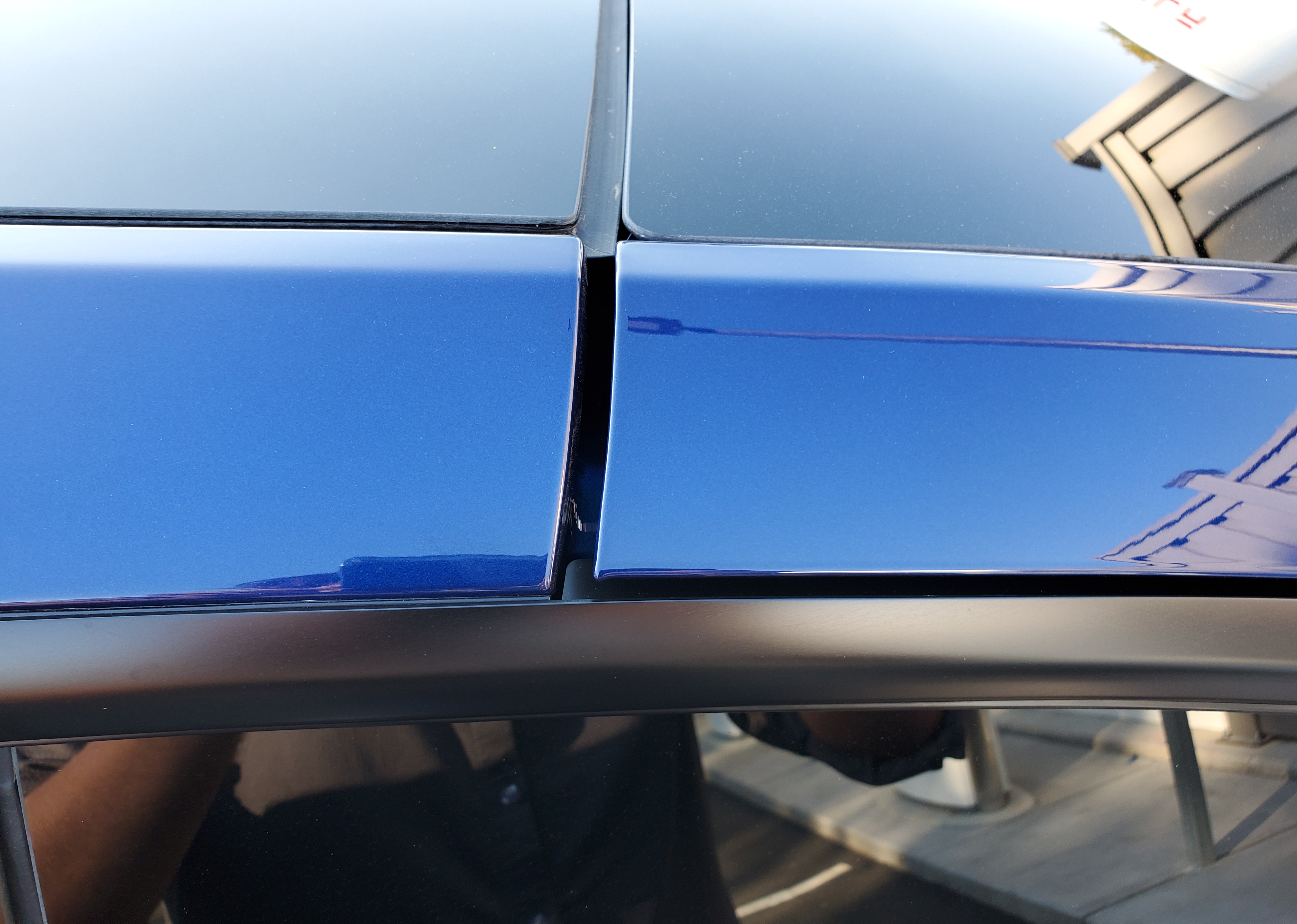 The trunk will sometimes not close completely and you have to press on it a little for the sensor to detect it’s closed. The owner said that Tesla is expected to fix it soon.

Other than those two issues, the car was in great condition. I took a good look at the panel gaps and they were consistent around the vehicle.

A big theme with the Model Y is that it is “just a taller and slightly bigger Model 3”.

I am definitely looking at the car through that lens to a degree since I’m a Model 3 owner, but I think there’s more to it.

Of course, the two vehicles have very similar designs and they apparently share about 70% of the parts, but there are subtleties in designing an SUV based on a sedan.

I think Tesla executed very well on that front because while the design is reminiscent of Model 3, I think Model Y stands on its own as an SUV.

Then, it fixes some of the biggest complaints about Model 3 – mainly the trunk opening.

Model Y is equipped with a full hatch and features impressive cargo storage capacity. We easily fit luggage for 4 people for a weekend plus our bounty from wine country: 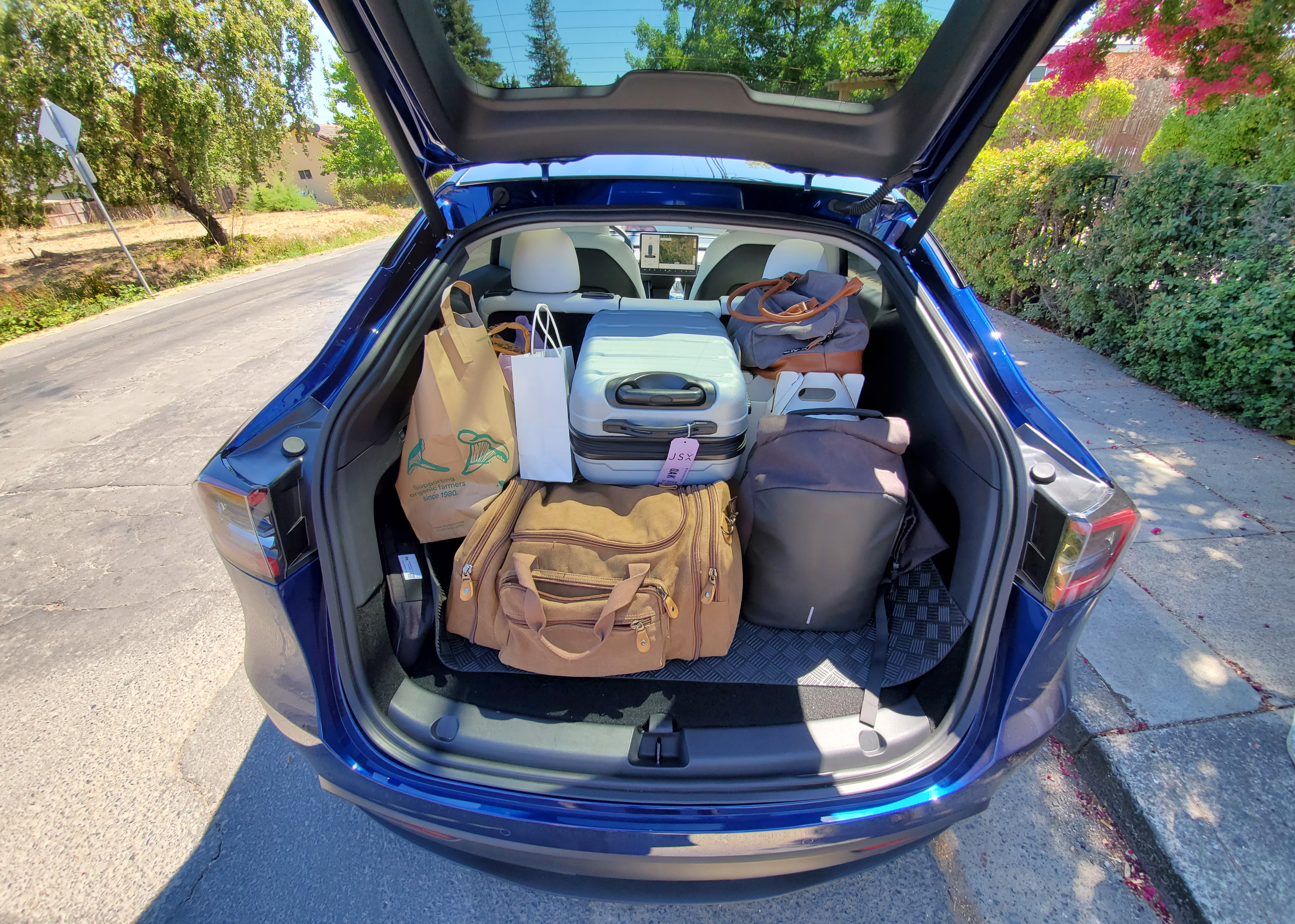 We didn’t even have to use the large compartment under the floor of the trunk nor the front trunk.

For a sedan, the Model 3 has impressive cargo capacity, but you wouldn’t be able to fit four adults and luggage as comfortably for a weekend road trip.

As a Model 3 owner, the interior of the Model Y is extremely familiar. Looking out from the driver’s seat, you’d think you are inside of a Model 3.

But once you got over how similar the experience is to Model 3, you start noticing some subtle differences that can make a big difference for some people.

First off, the slightly higher ground clearance makes it a little easier to get in and out of the car.

The interior is also a bit roomier and while the difference is not that big compared to Model 3, it feels a lot more spacious thanks to the lack of a beam separating the glass roof: 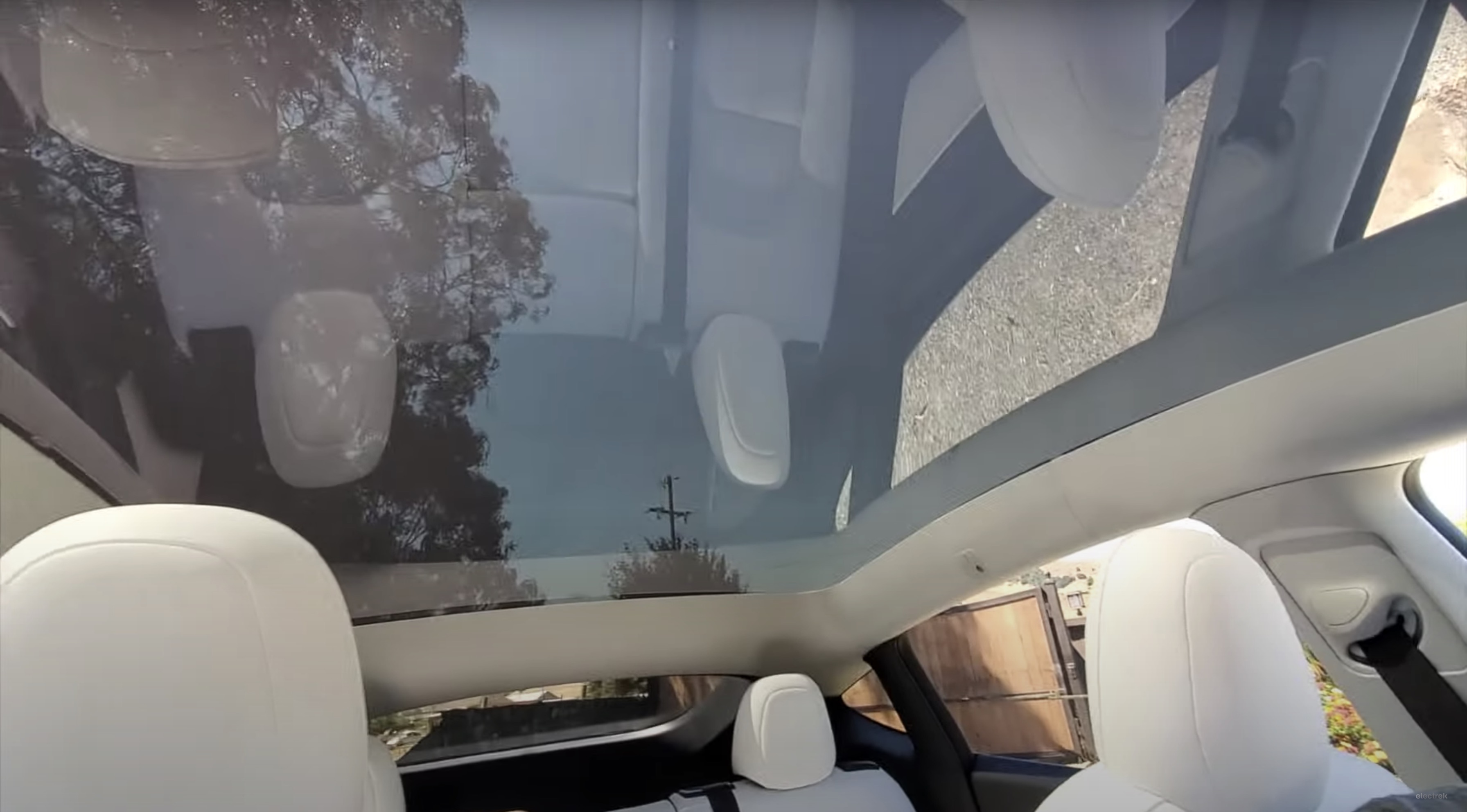 For a second, I thought I was discovering that Tesla actually updated the center touchscreen in Model Y compared to Model 3, but I later found out that the owner applied a matte transparent screen protector on the center display.

I have a screen protector on Model 3, but I was shocked by how big of a difference a matte protector makes. It significantly reduces glare and it even gives a different feel to the screen.

I bought one for my Model 3. Here’s the link on Amazon if you want one for your Model 3 or Model Y.

That’s where you want Model Y to be like Model 3. A sedan is generally more fun to drive than an SUV – although many people like the feeling and visibility of being higher up.

You definitely feel that in Model Y, but it’s only one more inch off the ground than Model 3.

Thanks to the low center of gravity enabled by the battery pack, the electric SUV is super stable and feels connected to the road.

The version I was driving was the Long Range Dual Motor All-Wheel Drive and coming from a Model 3 Performance, which is a little more powerful, I still felt like I could have some fun with the car on the country roads in Sonoma. It certainly doesn’t drive like an SUV.

My only complaint is that I felt the suspension to be a little stiff in more spirited driving, but I might be just nitpicking. 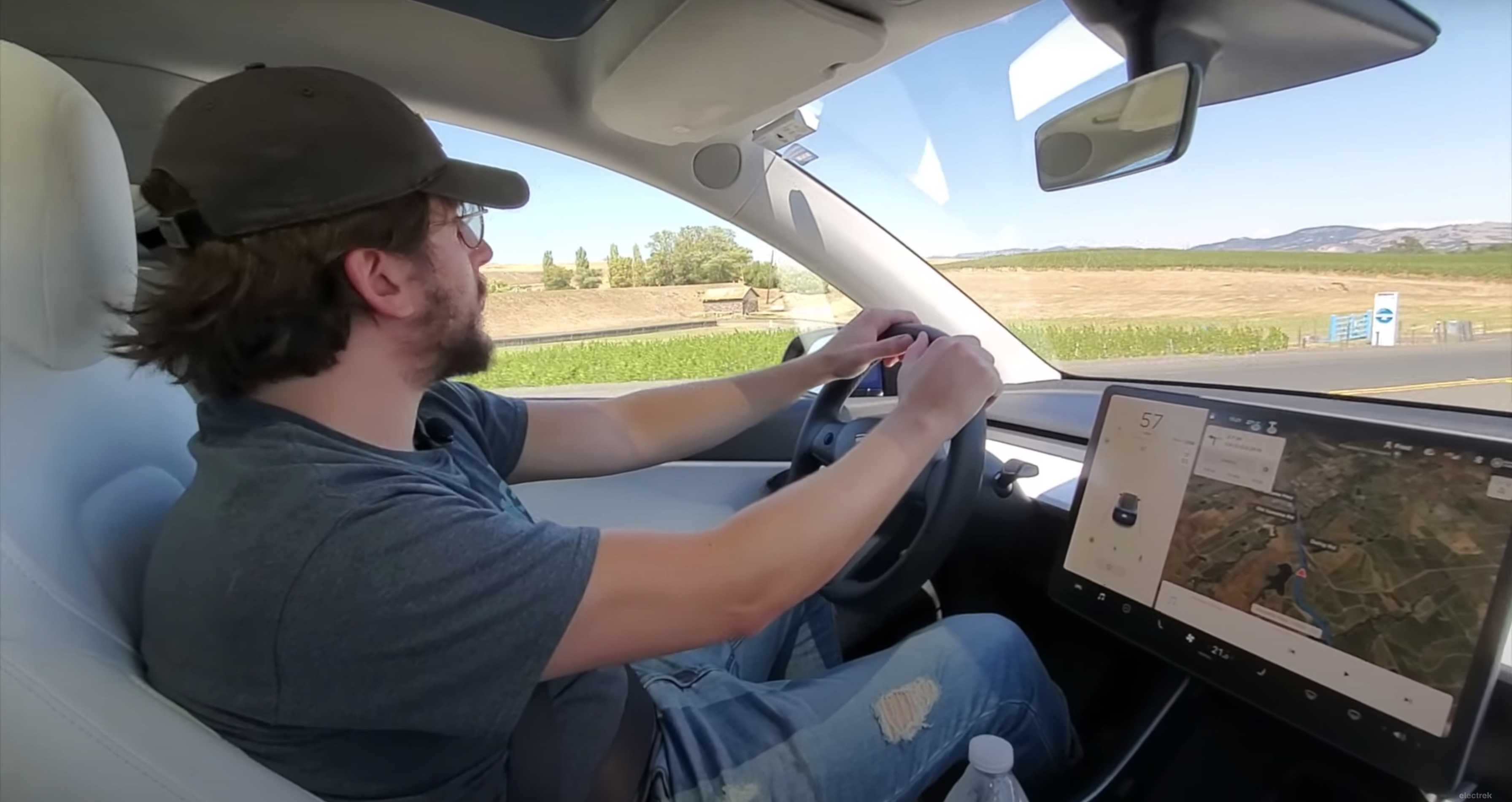 As for the road trip experience, this is the perfect electric car for a road trip. The level of comfort and cargo capacity you get in this relatively small package is impressive.

Then you add to that the car has 316 miles of range based on the EPA rating and you can easily get a good day of driving without having to charge.

If you do stop to charge, the 250 kW charging capacity is going to make a quick stop: 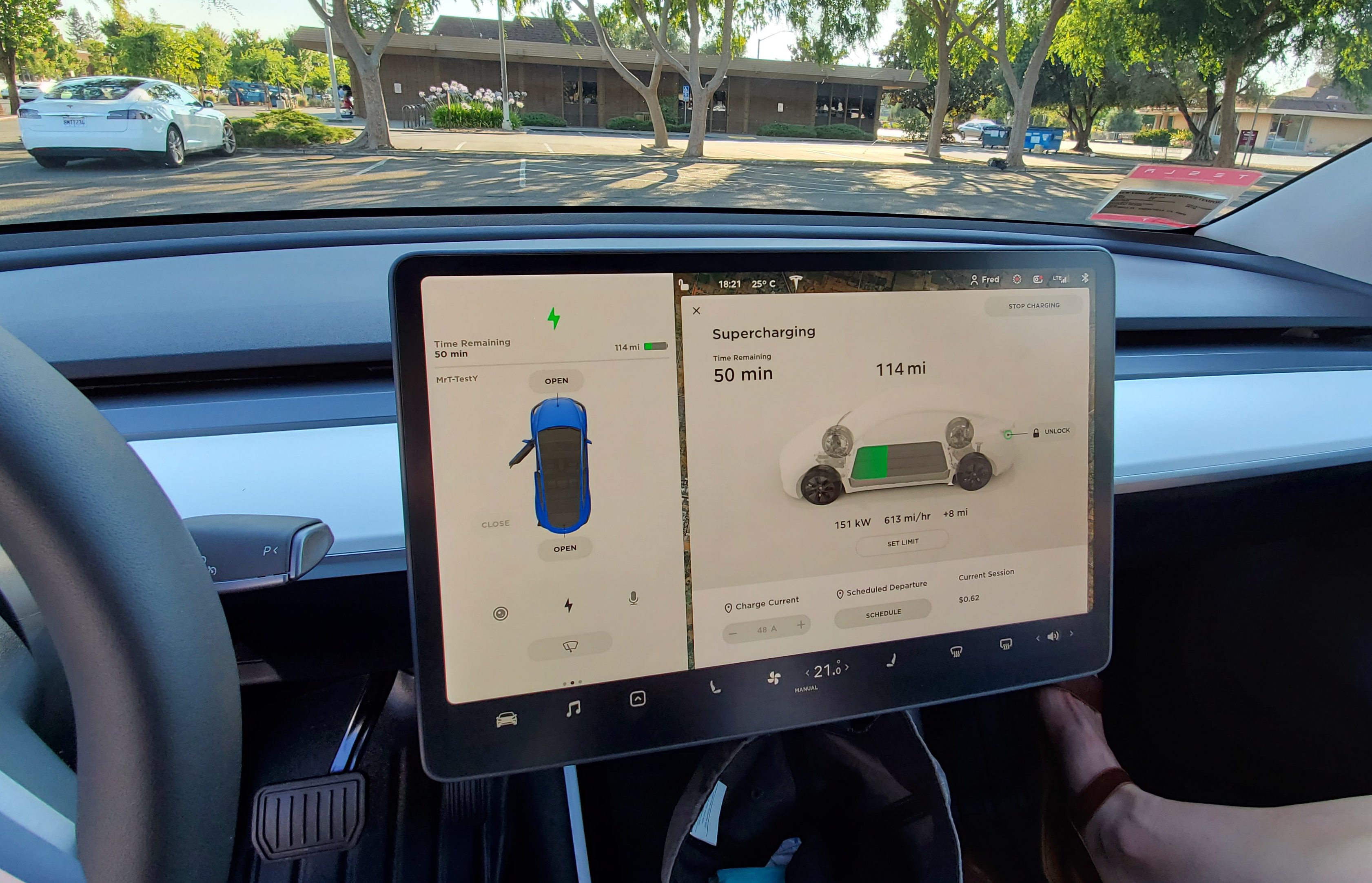 We had still 20% capacity left, but we needed to stop for groceries. There’s a large Supercharger station right next to a Whole Foods in Santa Rosa so we stopped there.

Since we still had 20% capacity left, we didn’t quite reach a charge rate of 250 kW. Instead, it topped off at 180 kW, but the car was almost 80% charged within the 25 minutes that it took for us to get the groceries and we were ready to go.

Overall, it was a super easy road trip experience with no range anxiety and no compromise.

Again, this is just a shorter first drive/road trip review. We are soon taking delivery of our own Model Y and we are going to come back with a more extensive review in the coming weeks.

But my first impression of the Model Y is that Tesla executed brilliantly with this car.

While the aggressiveness in bringing it to production has resulted in quality issues during the early ramp up, I am confident that Tesla is going to fix those issues as production stabilizes and the company is going to end up with a successful vehicle program.

The size, functionalities, range, and driving pleasure all in a beautiful package is going to make Model Y a hard benchmark to beat.

The affordability is going to be the limiting factor for many – especially in places where Model Y doesn’t qualify for EV incentives.

It currently starts at $50,000 in the US, but a cheaper version without all-wheel-drive is supposed to arrive in the coming months and it should bring the price down closer to $45,000.