Portugal has ended its coal-burning two years ahead of schedule. It’s the third EU country to close its coal plants early in 2020, after Austria and Sweden. Belgium was the first EU country to end coal, in 2016.

Portuguese energy utility EDP announced the closure of its Sines coal power plant, which emitted 13.5% of all carbon dioxide in Portugal. Sines (pictured) is south of Lisbon, on the coast. EDP will close one more plant and convert another unit in Spain. The utility is now evaluating the development of a green hydrogen production project in Sines, according to its website.

The decision to anticipate the closure of coal power plants in the Iberian Peninsula is thus a natural consequence of this energy transition process, in line with European carbon neutral targets and with the political will to anticipate these deadlines. In this process, in which people have been a fundamental ally, EDP also guarantees that it will fulfill its commitments to all its workers and collaborate on their training and professional integration.

Kathrin Gutmann, director at the Europe Beyond Coal Campaign, said:

Portugal had already accelerated its coal phase-[out] from 2030 to 2023. The fact that it is being brought forward yet again to 2021 shows just how fast a country can clean up its energy system when it commits to clean energy and climate action.

On January 9, Donald Trump announced there would be an overhaul of the US’ landmark environmental law, the National Environmental Policy Act (NEPA). Yesterday, he finalized a rollback of the NEPA.

This drastically limits the ability of citizens and communities to learn about and give input on major infrastructure projects that could threaten public health and the environment.

NEPA has been in place for 50 years and is considered a bedrock environmental regulation. It requires federal agencies to assess the environmental effects of their proposed actions prior to making decisions.

The revised plan establishes two-year time limits for environmental impact statements and one-year limits for weakened environmental assessments. This makes it easier to build highways, pipelines, chemical plants, and other projects that pose environmental risks and restricts the ability of agencies to consider a project’s full impact.

Up until now, NEPA has required, with the backing of federal courts, that the federal government considers a project’s carbon footprint when it comes to leasing public lands for fossil-fuel projects. Federal agencies will no longer have to consider the impacts of infrastructure projects on climate change.

The Trump plan carries out the wishes of energy companies that have lobbied the government to deregulate what they consider laborious permitting requirements. 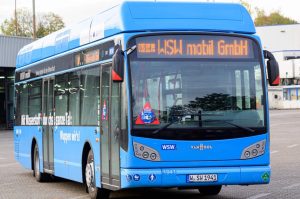 The German city of Wuppertal partnered with Cologne in 2018 to order 40 hydrogen-powered buses made by Belgian manufacturer Van Hool NV. Cologne is running 30 of them, and the remaining 10 will soon be on the road in Wuppertal. It’s thought to be the largest order for hydrogen buses in Europe.

Buses and heavy-duty trucks are the vanguard market for hydrogen vehicles and will pave the way for adoption of the technology in the passenger vehicle market down the road. Therefore, Worthington is expanding its production capacity for onboard fueling systems in Europe. A new state of the art composite cylinder production facility will open in Austria this summer to supplement the output of our existing plant in Poland.