Over the last few years, Tesla has changed its Autopilot options and pricing so many times, it has been hard to follow.

Finally, the automaker ended up making the Autopilot’s Autosteer and Traffic-Aware Cruise Control standard on its vehicles and bundled the rest of the features into its ‘Full Self-Driving package’ (FSD).

The automaker started selling the package for $5,000 and it has gradually increased the price to now $7,000.

Tesla also made its intentions clear that it plans to keep increasing the price of the FSD as it introduces more features and capabilities under it. 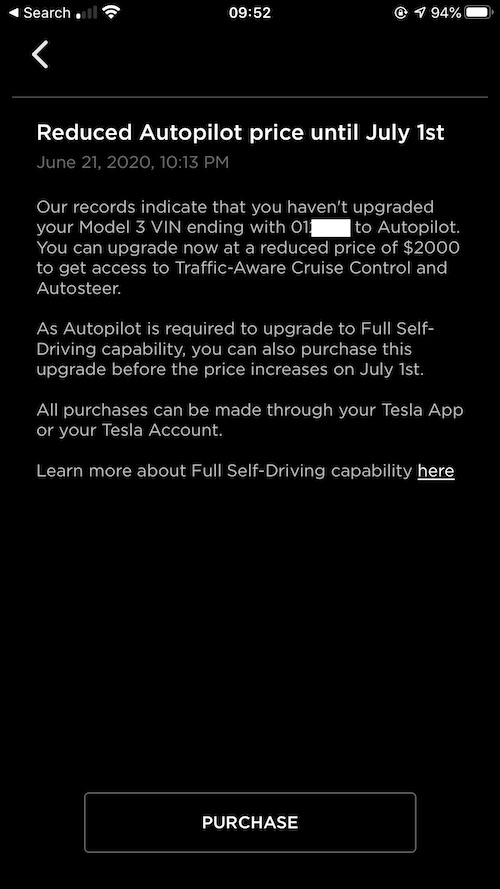 We previously reported that Tesla plans to increase the price of the upgrade to $8,000 on July 1st.

As for the regular Autopilot, owners who bought their cars before the feature was standard have been able to upgrade through the app for $3,000.

Now Elon Musk has announced that Tesla is discounting the upgrade to $2,000 until July 1st:

We verified through the app with a Model 3 owner who bought when the basic Autopilot package wasn’t standard and it indeed shows the option costing $2,000: 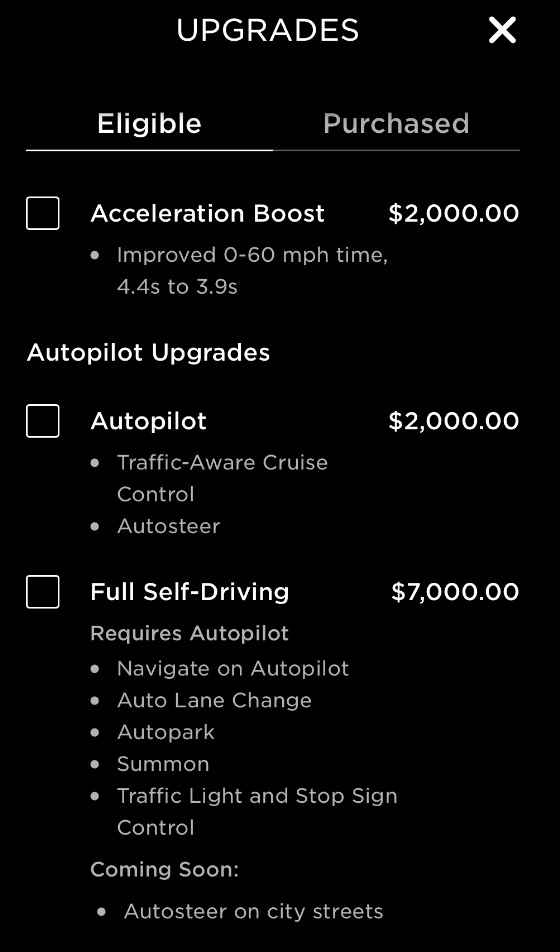 The price will remain like that until the end of the quarter along with the FSD package, which will increase to $8,000.

$2,000 for Autosteer and Traffic-Aware Cruise Control is not a bad deal depending on how much you drive.

I personally enjoy the features a lot on long-distance travel and they have improved greatly over the last few years.

However, for those who mainly drive their cars on city streets over short distances, it might not be worth it.

As for FSD, my stance is that if you believe in Tesla’s ability to deliver a real full self-driving system on the current hardware and do it within a reasonable timeline, then it’s definitely worth it at that price.

By announcing the price increase for FSD and the end of the discount on basic Autopilot, Tesla is trying to convince people to upgrade by the end of the quarter to get a boost of revenue, and it might work.

Especially with FSD, Tesla is not only convincing more people to pay for the package but it is also now recognizing more revenue for each purchase as it deploys more features.

Last we heard, Tesla was only recognizing half of the revenue from every sale, but now that is has been deploying the “Traffic Light and Stop Sign Control” feature, it might be able to recognize even more revenue for both new people buying it and owners who already bought the package.

With over half a billion in unrecognized revenue from FSD at the end of the last quarter, new FSD revenue could amount to several hundreds of millions in Q2.

That could really help Tesla in a difficult quarter.