The Juiced HyperScorpion is one of the most anticipated electric mopeds of 2020. Pushed behind schedule by the COVID-19 pandemic, it is finally preparing to ship to the first reservation holders later this month.

Ahead of the first shipments, Juiced Bikes has released a detailed video showing off the many features and components that set the Juiced HyperScorpion apart from other e-bikes.

As founder and CEO of Juiced Bikes Tora Harris explained, the goal of the Juiced HyperScorpion was to create a retro-inspired electric moped that could still appeal to a wide group of present-day riders.

The original concept was to be a retro style moped like you saw in the 70s and just make it electric. And I think we definitely hit that target. One of the issues with step-through frame bikes is they can kind of look a little bit goofy, so we wanted to make them look actually cool but still retain the step-through so that anybody could ride this bike.

I think it is fair to say that the Juiced Scorpion and HyperScorpion are some of the better-looking step-through e-bikes we’ve seen in a while. 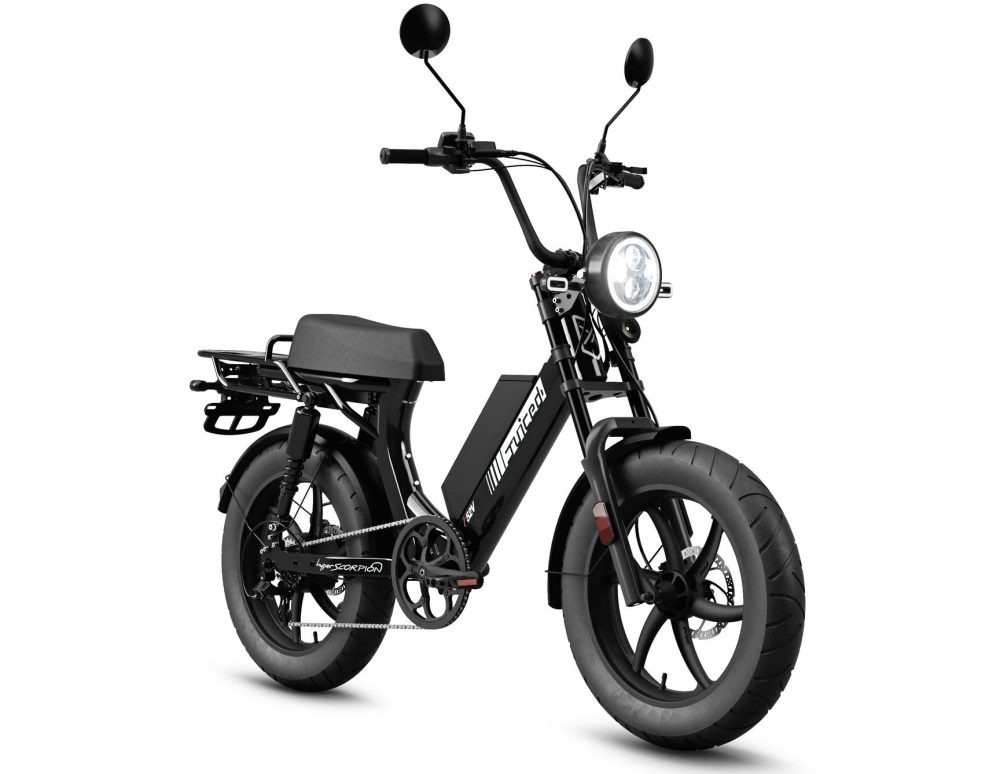 In the video shown below, Tora shows off a number of unique features of the HyperScorpion. The front LED headlight uses four elements for up to 2,000 lumens in high beam mode, and also features a halo element as a daytime running light (or when you don’t want to blind cyclists in the bike lane). There’s also a standard license plate holder that is illuminated, a pair of mirrors, a motorcycle horn, and a turn signal package in the front and rear.

As Tora explained, the motorbike-style accessories help the HyperScorpion and its riders achieve better road presence.

Electric bicycles are getting faster and they’re also being used more often on the road with cars. Although they may not be necessary from a legal standpoint, you need to be able to communicate your intentions to cars. And once you start using them, you’re just like “Wow, electric bikes just really need turn signals.”

The bike also comes with two side view mirrors which are very important, because when you have the mirrors you actually feel more legit as far as being a vehicle on the road. Sometimes people see a bike and maybe think you’re not moving very fast, but when they see the mirrors and they see the full light package, all together it brings a different kind of presence which gives a little more respect when you’re on the road.

Tora also showed off a cross-section of their custom with 5mm puncture protection, then showed tests of riding over piles of broken glass to demonstrate the protection of the tires. 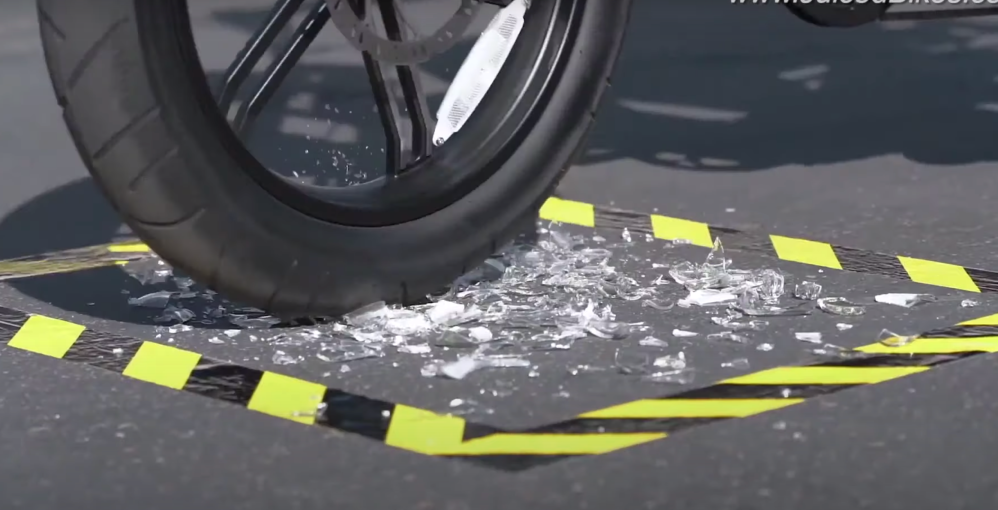 The bike comes with a fully adjustable suspension in both the front and rear.

Demonstrations of the suspension in action look pretty impressive.

The rider is still getting jostled while riding over football-sized rocks, but certainly much less than on most electric bikes. Check it out below.

The Juiced HyperScorpion can reach high speeds, with one video showing Tora hitting 34 mph (54 km/h) on a slight uphill climb. With such high-speed potential, it was important to its designers that riders still be able to add appreciable pedaling support at the top end. To achieve that, the bike is fitted with an 8-speed transmission with the smallest rear cog sized at 11t and a large 56t front chainring.

The bike ships in Class 2 mode with a 20 mph (32 km/h) speed limit. Riders that live in states that allow Class 3 e-bike speeds can put the bike in Class 3 mode to achieve a higher speed limit of 28 mph (45 km/h). There’s also a Race mode that completely unlocks the bike’s top speed and is intended for race tracks or private property. The display comes with a standard mode and an advanced mode.

The latter gives a larger amount of ride data — perfect for nerds like me that want to more information like consumption efficiency, precise battery watt-hours and voltage, motor temperature, etc. 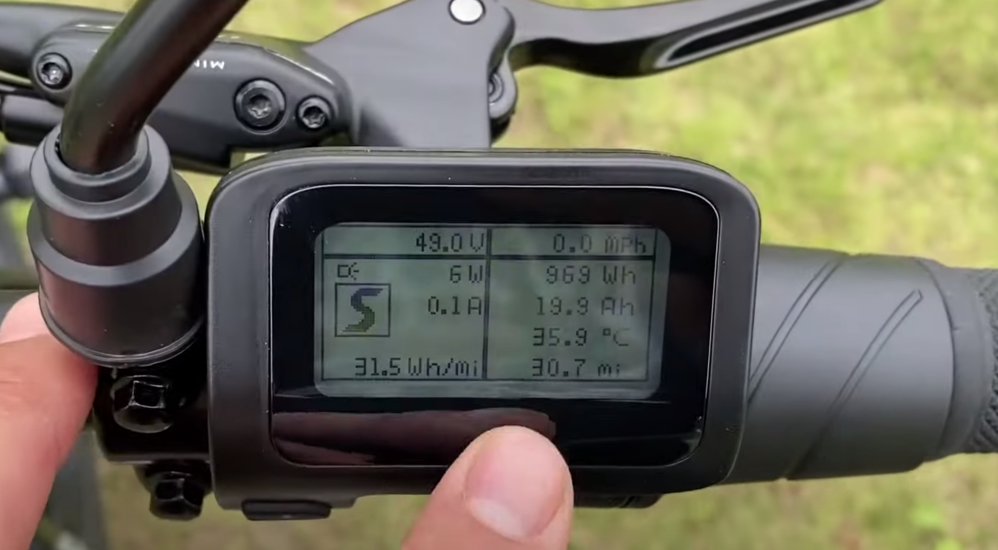 The HyperScorpion is powered by a 52V 19.2Ah battery for just under 1kWh of capacity. As Tora explains, that’s 40% larger than average e-bike battery packs and results in better range and battery longevity. Juiced rates the HyperScorpion for 70+ miles (112+ km) of range with pedal-assist.

The motor for the bike was actually custom developed as a joint project between Juiced Bikes and Bafang. Juiced wanted to hit “at least 28 mph Class 3 speeds” with the bike but needed to do it on a 20″ wheel, meaning they would have to develop a higher RPM motor.

For pedal-assist activation, the HyperScorpion employs both a torque sensor and a cadence sensor.

While most cadence sensors use 12 poles, the HyperScorpion’s cadence sensor uses around 100 poles, giving ultra-precise pedal speed feedback that combines with the torque sensor to provide the smoothest and most accurate pedal-assist response.

For those ready to put a HyperScorpion in their own garage, the pre-order price is $2,899. There’s also the standard Juiced Scorpion with a pre-order price of $1,899. It shares many attributes with the HyperScorpion but isn’t quite as nicely equipped, yet still reaches 28 mph (45 km/h). And keep in mind those pre-order prices won’t last forever. Both bikes are set to see prices bump to their higher MSRPs at some point in July.