Nissan yesterday unveiled its four-year growth plan. The Japanese automaker will “right-size” its production capacity and streamline unprofitable parts of its business. At the same time, Nissan said it would invest in areas of strength, such as sports cars and electric vehicles. That said, Nissan will introduce the Ariya EV to the US in 2021, while most of its EVs will be sold in China.

The company said that by 2023, it will launch eight pure EVs while expanding its hybrid technology dubbed e-Power. In speaker notes provided before yesterday’s presentation, Nissan said:

By the end of fiscal year 2023, we forecast electrified vehicles to account for 60% of our sales in Japan, 23% in China, and 50% in Europe, resulting in sales of more than 1 million units.

To be clear, the company is including hybrids in its forecast of “electrified” vehicles. And notably, Nissan did not specify the percentage of sales of battery-powered cars in the United States.

The relevant slide from its presentation explained the company’s EV plans, using small flags to share the targeted market. 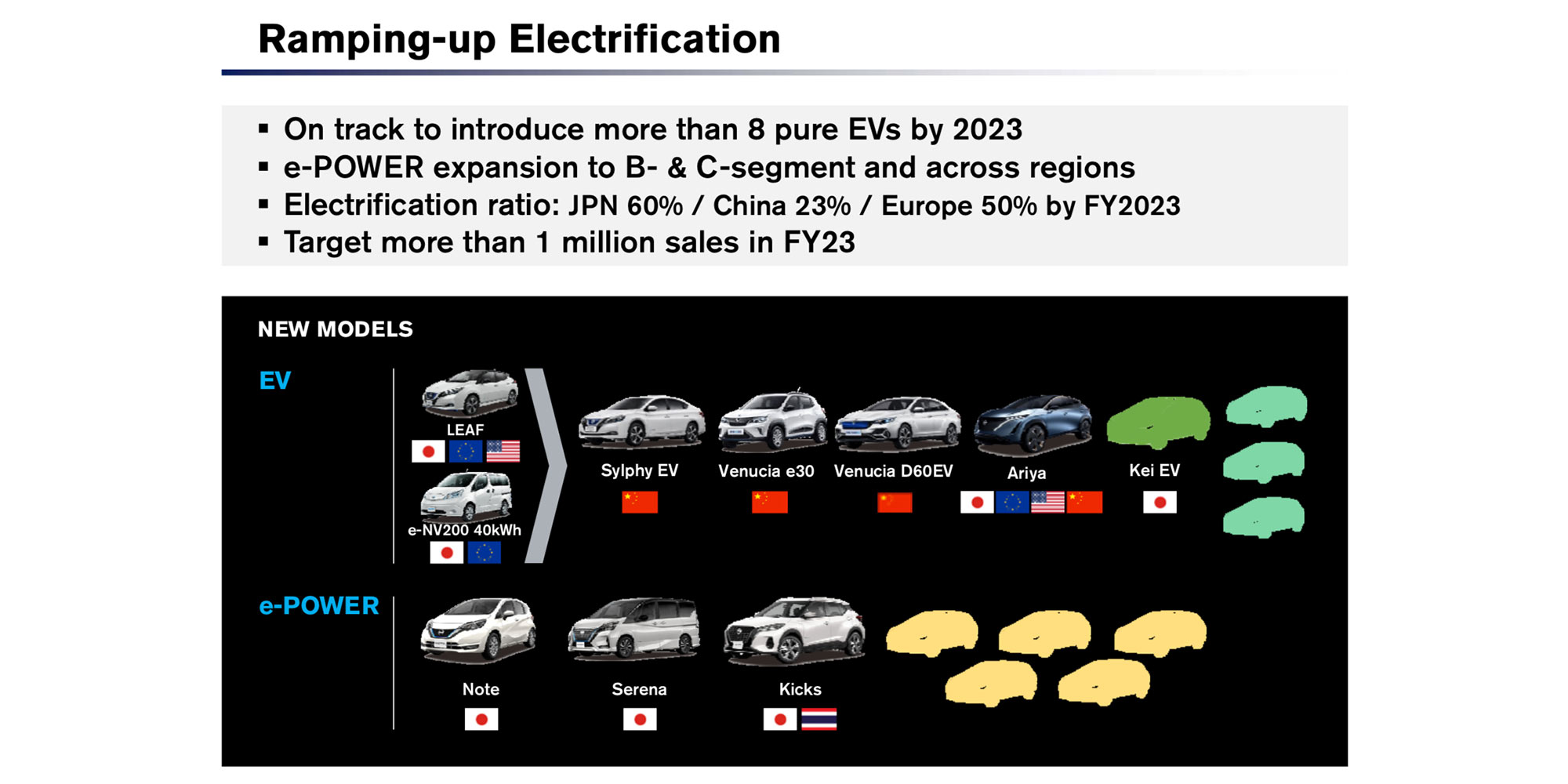 In the short term, only two of Nissan’s seven EVs will be sold in the United States: the Leaf and the upcoming Ariya. An all-electric Kei minicar will be introduced in Japan.

The company currently offers three EVs in China. And there are three other undisclosed future EV models with no mention of its likely markets. It would be surprising if those were not targeted to China and Europe, where regulations on emissions are stricter than the US.

In April, Japan’s Yomiuri Shimbun newspaper reported last month that Nissan, Renault, and Mitsubishi Motors plan to strengthen their alliance by jointly developing electric vehicles. The three-company coalition will increase the number of models to be launched through joint development. The companies will share motors and batteries.

The company’s restructuring plans include:

More than a decade after introducing the Nissan Leaf, Nissan will introduce the all-electric Nissan Ariya crossover as soon as 2021. The Ariya is a high-performance, all-wheel-drive big brother to the Leaf, but there are few details and no firm commitments for a production date.

We expect the Ariya to hit Japan in 2021 before arriving in other global markets. It will have a range of around 300 miles and will look like a toned-down version of the Ariya Concept unveiled at the 2019 Tokyo Motor Show.

Nissan is expected to officially unveil the production version of the Nissan Ariya in July 2020.

It’s unfortunate to see Nissan’s presence in the EV market continue to diminish.

This week’s announcements about its future electric plans don’t change the trend. They are primarily focused on China and Europe, with hybrids representing a significant part of the mix.

Nonetheless, the Leaf is an excellent EV that sells in decent numbers. We hope that the Ariya can add to that strong foundation — while providing a compelling, affordable option for EV buyers in the US.