We’ve seen some pretty snazzy electric bicycle conversion kits lately, but this one might take the cake. Known as the “Unlimited eBike Kit”, it was developed over the last two years by the team of engineers at Unlimited and draws on their experience building electric skateboard kits to create a powerful yet minimalist e-bike conversion kit.

Our last experience with Barcelona-based Unlimited saw us testing out the company’s Unlimited x Loaded e-skateboard kit, which they have since delivered to thousands of customers.

Now the team of engineers is back with another slick conversion kit.

The kit is available in a number of versions and with various accessories, but in its simplest form, it consists of just a battery, a motor wheel, and a pedal-assist sensor. The pedal assist sensor is even wireless, meaning there’s nothing to plug in. Riders simply swap in the motor wheel in place of their own wheel, place the battery on the downtube, and the pedal-assist sensor on the pedal crank.

Without the extra wiring, the kit is simpler to install and looks pretty nice too.

Unlimited says that the kit will fit just about any bike, and offers motor wheels in sizes from 16″ all the way up to big 29er wheels. 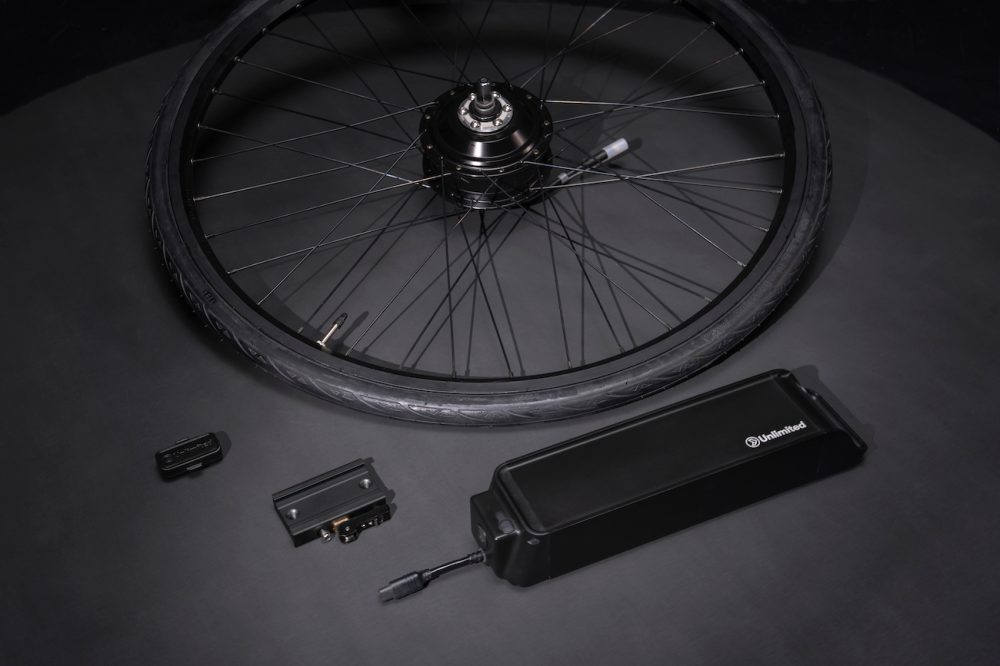 The kit is available in the EU and US. The motor can output up to 750W of power and reach speeds of 35 km/h (22 mph). However, it will be limited to meet the appropriate national laws for each rider’s country. That means Americans will likely get the unlocked kits, while Europeans will have somewhat lower speed and power limits applied depending on their country.

The kit is available in three different levels, with the major difference being the size of the battery and the inclusion of a stealth OLED display. 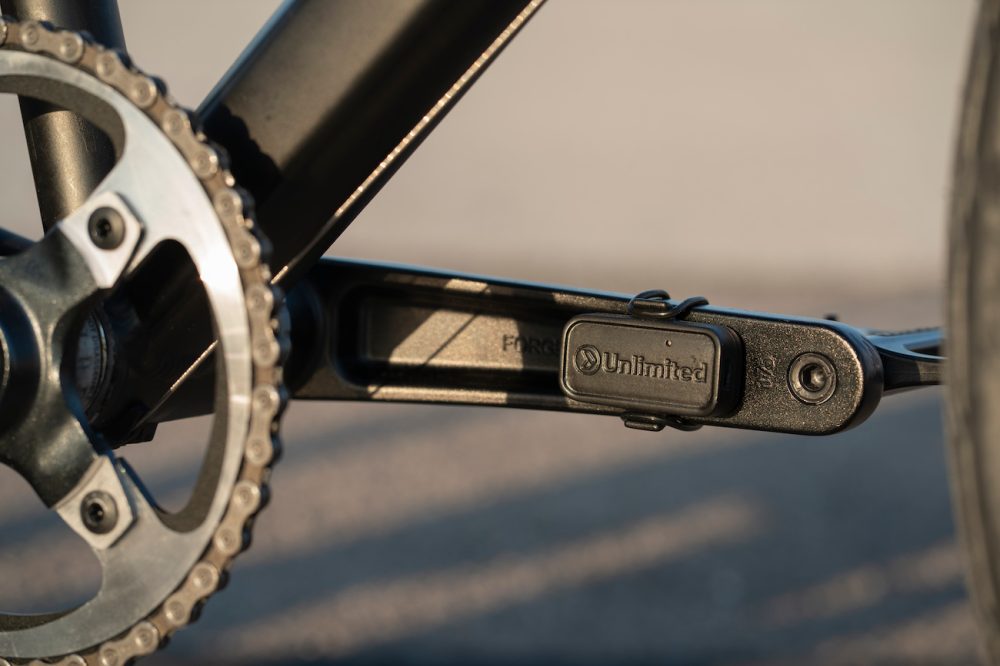 The kit starts at US$550, with additional accessories like the throttle or larger battery pack costing extra.

For those that want to take advantage of Unlimited’s kit but don’t want to do the conversion themselves, Unlimited also offers the WARP e-bike with their kit pre-installed. The WARP e-bike features the same range and speed specs as described for the kit above and weighs either 15 or 16kg (33 or 35 lb) depending on the size of the battery and inclusion of the display.

Pricing for the WARP bike starts at US$1,068. The bike is expected to begin shipping in February of 2021, while the kit should ship a month earlier.

And as you might have guessed, the pre-orders can be placed via an Indiegogo campaign that just opened today.

While I always advise caution with Indiegogo campaigns, this one has two things going for it. First, Unlimited has already delivered thousands of electric skateboard kits after their first successful campaign. And secondly, I’ve personally tested Unlimited’s past kit and came away impressed with the quality of the production and the innovative engineering.

For their new e-bike kit, the batteries are a bit small (especially that 151Wh pack), but as a pedal-assist bike it can still be a potent commuter. I have a Swytch e-bike kit with a 180Wh battery on my mountain bike and I can bang out a range of over 100 km (62 mi) when I put it down into the lowest assist level, which is pretty crazy. So let that be a lesson to those that say you can’t get by on a small battery.

Now if you’re a rider in the US and you want to get the throttle accessory, I highly recommend looking at the 353Wh battery. That throttle will burn battery quicker than pedal-assist, and the smaller battery could prove to be less than you bargained for if you have a heavy throttle finger.

Otherwise, I like the kit and its minimalist design. The current promotional price now is pretty awesome, though I imagine the price will go up after the launch.

What do you think of the Unlimited eBike Kit? Let us know in the comment section below!