Electric skateboards are one of the most thrilling ways to commute. Sure, I love a good electric bicycle or scooter, but nothing compares to the rush of carving down the street or bike lane on an electric skateboard. And with today’s launch of the Unlimited x Loaded electric skateboard kit, you can turn your favorite longboard into a street-surfing electric cruiser in no time for as low as $769, or pick up a ready-to-ride electric skateboard built on a premium Loaded Boards long or shortboard.

Loaded Boards is known for its high-quality decks and premium components such as Paris trucks and Orangatang wheels. In fact, that’s a big part of why Boosted used Loaded Boards as its supplier for so many years before moving production in-house.

And now with a partnership with Unlimited Engineering, Loaded Boards is announcing its own new electric skateboard brand known as Unlimited x Loaded.

The Cruiser kit adds another battery, doubling the range to around 13 mi (21 km) and costing $1,099. The weight increases slightly to 6.6 lb (3 kg). I’ve got the Cruiser kit on my board, so that’s what you’re seeing in these photos.

For real throttle junkies, the Racer kit adds a second motor, bumping the speed to 27 mph (43.5 km/h). The maximum hill angle more than doubles from 9 degrees to 20 degrees, and the price increases to $1,349.

All of the kits are user-tunable with app-based settings and include the premium Orangatang wheels. The motors are custom designed and the batteries mount to a carbon fiber plate to keep weight down. The attention to detail in the Unlimited kit is second to none. This isn’t some cheap imported kit. They take care of every detail and even include a torque wrench in addition to a slimline skate tool to ensure that riders can properly install the kit on their own boards, right down to the proper torque loading of the nuts.

And as nice as the kits are for attaching to any trucks or deck, the partnership with Loaded Boards and the ability to get a prebuilt board on a Loaded deck is the best part of this kit. The Loaded decks are simply amazing. They are built in California, and the quality difference that makes is obvious as soon as you step foot on the board.

I’m on an Icarus deck with the Cruiser kit and I love the ride. The Paris trucks and Orangatang wheels ride and corner so smoothly, while the flared wheel wells and the wheel cutouts mean there’s no wheel bite and I can carve hard into turns. The cork bottom layer on the deck helps absorb vibration, though the Orangatang wheels already handle most of that quite well.

Riding over bricks and sidewalk cracks is normally not so fun on any electric skateboard, but the Icarus and Cruiser kit make them practically the same as smooth paths and bike lanes.

I’ve found the remote to be comfortable in the hand, if a bit small. But I’d prefer a smaller remote to a larger one anyways, since I’m always shoving it in my pocket when I hop off the board.

Speaking of hopping off, I can’t believe how lightweight the board is when I have to carry it. While I prefer riding, sometimes you end up in a crowd of people or head indoors and have to walk with the board. The whole thing barely weighs 15 lb (7 kg). That’s not featherweight, of course, but it’s still pretty darned light for an electric longboard. 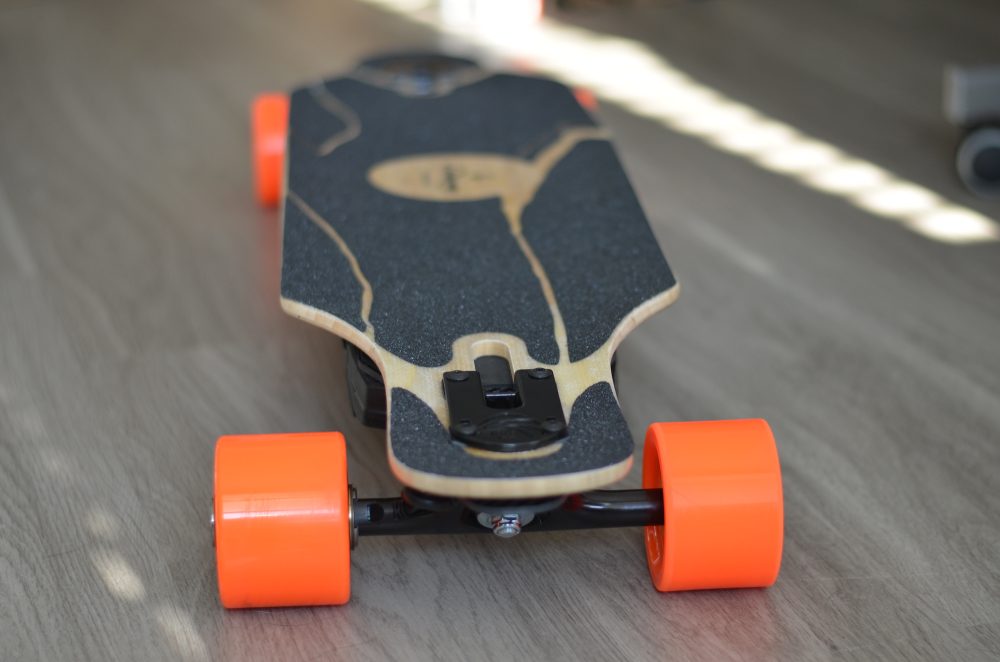 I’ve only been riding the board for about a day and a half so far, and this isn’t a full review by any means. Once I can put more miles on the board, I’ll be back with my full thoughts. But for now, I’m impressed with the Unlimited x Loaded electric skateboard kit. The only thing that I can fault it for right now is that the braking power isn’t mind-blowing. It will successfully bring you to a stop, but perhaps I’m just spoiled by the Boosted Stealth, which seems like it drops an anchor when you hit the brakes.

If you want even stronger braking, the Race kit comes with dual motors and will thus provide twice the braking power. On the single motor Cruiser kit that I’m testing, braking is usually sufficient, though in an emergency braking scenario I’d definitely be ready to hop off if necessary. But emergency braking isn’t something skateboards are known for in general.

So from what I’ve seen and ridden so far, I’m definitely a fan of the Unlimited x Loaded electric skateboards. I can’t wait to get more time on this one and report back with an in-depth review, so keep an eye out for that.

And do let us know what you think about the board in the comments below.