Daily global carbon dioxide emissions decreased by 17% in 2020 by early April compared with the mean 2019 levels. This is based on energy, activity, and policy data available up to the end of April due to coronavirus lockdowns and the reduction of economic activities. This percentage is according to an article published on May 19 in Nature Climate Change titled, “Temporary reduction in daily global CO2 emissions during the COVID-19 forced confinement.”

At the height of sheltering in place in early April, daily emissions globally decreased by around 18.7 million tons compared to average daily emissions in 2019. The last time emissions were at that level was in 2006.

However… unless countries make a concerted effort to build emissions reduction and green energy into their stimulus plans, this won’t last. (And as I wrote yesterday, people want it, [most] governments want it, and corporations want it.)

Corinne Le Quéré, professor of climate change science at the University of East Anglia and the study’s lead author, said:

Globally, we haven’t seen a drop this big ever, and at the yearly level, you would have to go back to World War II to see such a big drop in emissions.

But this is not the way to tackle climate change — it’s not going to happen by forcing behavior changes on people. We need to tackle it by helping people move to more sustainable ways of living. 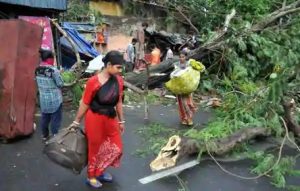 The 2020 hurricane season begins on June 1, and the National Oceanic and Atmospheric Administration (NOAA) released its storm predictions this week. NOAA is expecting an above-average season, with 13-19 named storms, 6-10 hurricanes, and 3-6 major hurricanes.

If it plays out this way, as NPR writes, “It will be the fifth year in a row with an above-average number of hurricanes — the most consecutive years of above-average hurricane activity ever recorded.”

Guess why? (Well, you ARE reading a roundup called Climate Crisis Weekly.) Climate change is causing more extreme rain and rising sea levels, so it’s not just the wind that is the primary threat during storms. Climate change doesn’t cause more frequent hurricanes; it causes more intense hurricanes, according to a new NOAA study.

Now, throw in the wee issue of the pandemic, and we’ve got a real party. The Federal Emergency Management Agency this week published its guide to hurricane preparedness while we grapple with COVID-19. That means such tweaks as traveling with soap and hand sanitizer, and staying with family and friends in non-evacuation zones rather than in shelters.

Yesterday was the International Day for Biological Diversity, aka #BiodiversityDay on Twitter. Why would we even have a day like this? Let’s hear why from the horse’s mouth. Or in a word, because nature:

The links between cultural and biological diversity hint that our solutions have always been in #nature.

For #BiodiversityDay, let's appreciate the many ways biodiversity enriches our lives and renew our commitment to use it wisely.

And speaking of nature, wildlife is thriving in closed US national parks due to the absence of people, and the National Parks Conservation Association says it’s incredible. Pollution-spewing traffic has been replaced by animals. You can read more about what wildlife is doing, from bears to bobcats, in this Guardian article. The parks are some of the US’ greatest assets, and they should open, but it’s kind of sad that this freedom for the animals will soon end.

Great white sharks are kinda scary, right? Why are they important to the planet, and why would we want to save them? (Jaws has a lot to answer for.) Because sharks are essential in maintaining oceanic equilibrium, and shark populations have decreased in the last three decades by a whopping 95%.

Apex Survival | Maiden Voyage is an award-winning documentary that explores the disappearance of great white sharks off the coast of South Africa — once the home of the largest population of great whites in the world.

In Apex Survival, the audience learns that as apex predator, sharks are essential in maintaining a delicate oceanic equilibrium.  Without sharks, our oceans will become unhealthy with cascading adverse consequences — not only for marine life; but also, for our planet as a whole.

A new survey of 2,000 Americans asked them how coronavirus has changed the way they think about living sustainably, according to Green Matters. And according to OnePoll, who conducted the survey, 70% of those polled said they have become more aware of their eco-unfriendly habits while being home more.

Further, 81% of those surveyed said they plan to keep the eco-friendly habits they’ve picked up during the pandemic.

Personally, I found this survey fascinating. In my household, we were already avid recyclers, but are now particularly conscious of it, and we don’t waste any food. But as for paper products, I’m afraid paper towel consumption has gone up as we disinfect door handles and counters. So has water usage, as we do laundry more frequently.

I’d love to hear readers’ thoughts on this poll, and whether you find you’ve become more or less conscious (or no change) of living sustainably during the pandemic. Please leave a note in the comments below.

Renewables are expected to grow by 50% in four years, and they’re going to play a vital part in the fight against climate change. Axios made a short video that explains what is driving the growth of green energy, and specifically solar. Have a watch:

And Greta Thunberg is still at it, in a lovely Swedish forest this week, celebrating biodiversity:

And finally, here’s Meret, a climate activist in Germany:

Finally, here’s Nye Turner. I don’t know exactly where Nye lives, but I’m pretty sure he’s in the UK, and I do know that he’s 11. He gets it. Maybe the adults could, too?

Have a peaceful weekend.