EGEB: The largest solar farm in the US has been approved 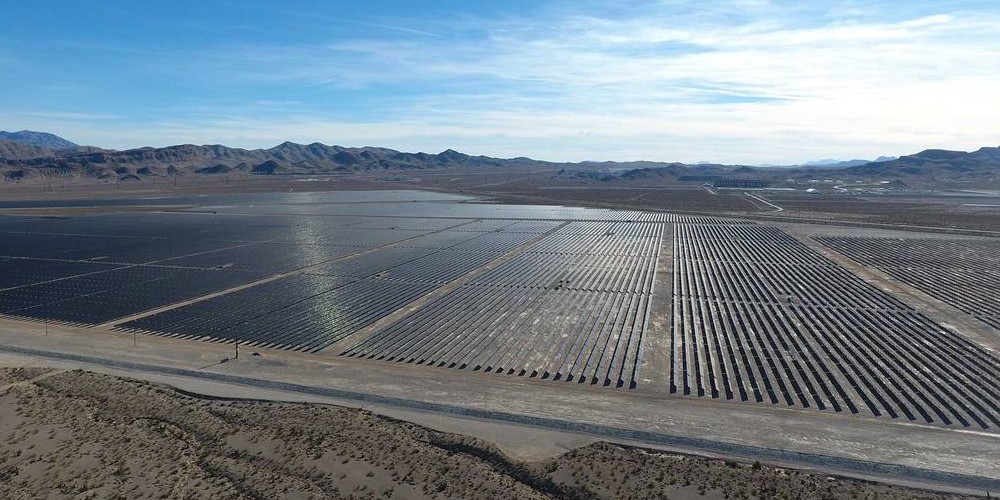 The US’ largest solar farm is a go

The Gemini project, a $1 billion solar farm 30 miles northeast of Las Vegas, Nevada, has been approved by the Interior Department (it will be on federal land). As Electrek reported on January 2, the farm will be 7,100 acres in size and provide 690 megawatts. It will also feature energy storage of at least 380 megawatts of four-hour lithium-ion batteries.

Nevada utility NV Energy, a subsidiary of billionaire Warren Buffett’s Berkshire Hathaway, is providing financial backing for the project. It’s expected that it will create 1,600 to 1,800 temporary construction positions, and provide 19 permanent jobs.

The solar industry is resilient and a project like this one will bring jobs and private investment to the state when we need it most.

In 2019, Governor Steve Sisolak (D-NV) signed a bill that requires Nevada utilities to get half of their electricity from green energy sources by 2030, and set a goal of 100% net zero by 2050.

India has had its first year-on-year reduction in CO2 emissions in 40 years, according to a study by the Centre for Research on Energy and Clean Air (CREA) for Carbon Brief. This is due to an economic slowdown due to coronavirus and the growth of green energy.

Emissions in India fell by around 15% in March and about 30% in April. Coal sales fell 10% and imports fell 27.5% in March due to reduced demand for electricity.

Cities are reporting much lower levels of particulate matter (PM 2.5) and nitrogen dioxide, which is released by vehicles and power plants.

Studying daily data from India’s national grid, analysts found that coal-fired power generation fell 15% in March and 31% in the first three weeks of April, while renewable energy generation increased by 6.4% in March and decreased by 1.4% in April.

Oil consumption has also been slowing since early 2019, researchers found, but noted that COVID-19 lockdown measures have had a “dramatic impact” on transport oil consumption, which fell 18% in March 2020 compared to the previous year.

Meanwhile, natural gas consumption, which increased 5.5% in the first 11 months of the fiscal year, is expected to fall by up to 20% during the lockdown, analysts said.

Car-free days in the UK

A new UK poll of 1,700 adults, conducted by YouGov and commissioned by climate charity Possible, found that more than half — 54% — of those polled support making town and city centers pedestrian-and-cyclist-only once a week, allowing only essential vehicles.

The British government has recently provided councils with the ability to reallocate space to cyclists and pedestrians as part of social distancing. Ultimately, the government will be rolling out a £2 billion cycling and walking funding package.

According to Business Green:

A coalition of nine NGOs published an open letter to the transport secretary, environment secretary, chancellor, leaders of local and regional authorities, and city mayors calling for a ‘street revolution to stop air pollution bounce-back’ as lockdown measures lifted.

The group — which includes Greenpeace UK, Living Streets, Cycling UK, Transport & Environment, and CPRE — is calling for at least £6 billion in funding over the next five years and for a transformation of the UK’s streets to deliver cycle lanes on all main roads and the creation of pedestrianized ‘Mini-Hollands’ in all towns and cities.