A new episode of Sandy Munro’s Tesla Model Y teardown criticizes the new electric SUV’s wiring, gives a first look at Tesla’s octovalve, and it looks like Munro has been hitting the whisky.

As we previously reported, Sandy Munro, a manufacturing expert who rose to fame in the Tesla community after his breakdown of an early Model 3, is now doing the first teardown of a Model Y.

Munro is releasing details about the teardown piece by piece, and you can check our previous report for Tesla Model Y’s fit and finish, frunk, and suspension, and another post about Model Y’s wiring and body casting.

The teardown shows some great improvements over Model 3 despite sharing 75% of parts with the electric mid-size sedan.

Today, Munro has released a new episode of his teardown and it’s a strange one:

First off, it opens up with a shot of him in front of the stripped Model Y, and you can see what appears to be an empty bottle of Canadian Club whisky inside the vehicle:

The engineer never brings up the fact that the bottle is inside the car.

He goes on to talk about the Model Y’s wiring:

I was kinda disappointed. I was hoping that I was gonna see a tremendous reduction in the amount of wiring that was associated with this vehicle because we have heard that there was going to be about 1.5 km of wires that was going to go down to about 700 millimeters. But unfortunately, what I see here is a nice application of the wire truss and candy stripping, and the wire gauge appears to be smaller than what we normally see for 12 volts, but there’s just as many wires — just as long.

Munro is referencing the fact that Tesla CEO Elon Musk has previously said that Model S has about 3 kilometers of wiring harnesses, which Tesla brought down to 1.5 kilometers in length for the Model 3 ad aimed to bring it down to just 100 meters with the Model Y.

Maybe Tesla was first aiming to make this change when Musk wanted to build the Model Y on a different platform than Model 3, but he was convinced not to by his team in order to accelerate the program.

Munro then goes on to discuss the fact that they didn’t find anything that would point to Model Y being able to do vehicle-to-grid or vehicle-to-vehicle charging, but it doesn’t necessarily mean that it’s not capable.

After that, the engineer goes off on another strange tangent by saying that Tesla could offer a front motor retrofit to people who bought a Model 3 RWD and claims that Musk previously promised that.

He pointed to a bracket and unused bolts in the Model 3’s front end:

However, we couldn’t find any such comment from Musk, and in the past, Tesla has been very reticent to do powertrain retrofits — instead trying to push customers to upgrades to a more recent model.

Munro then gave a first look at Tesla’s “octovalve,” which is at the heart of the Model Y’s HVAC system: 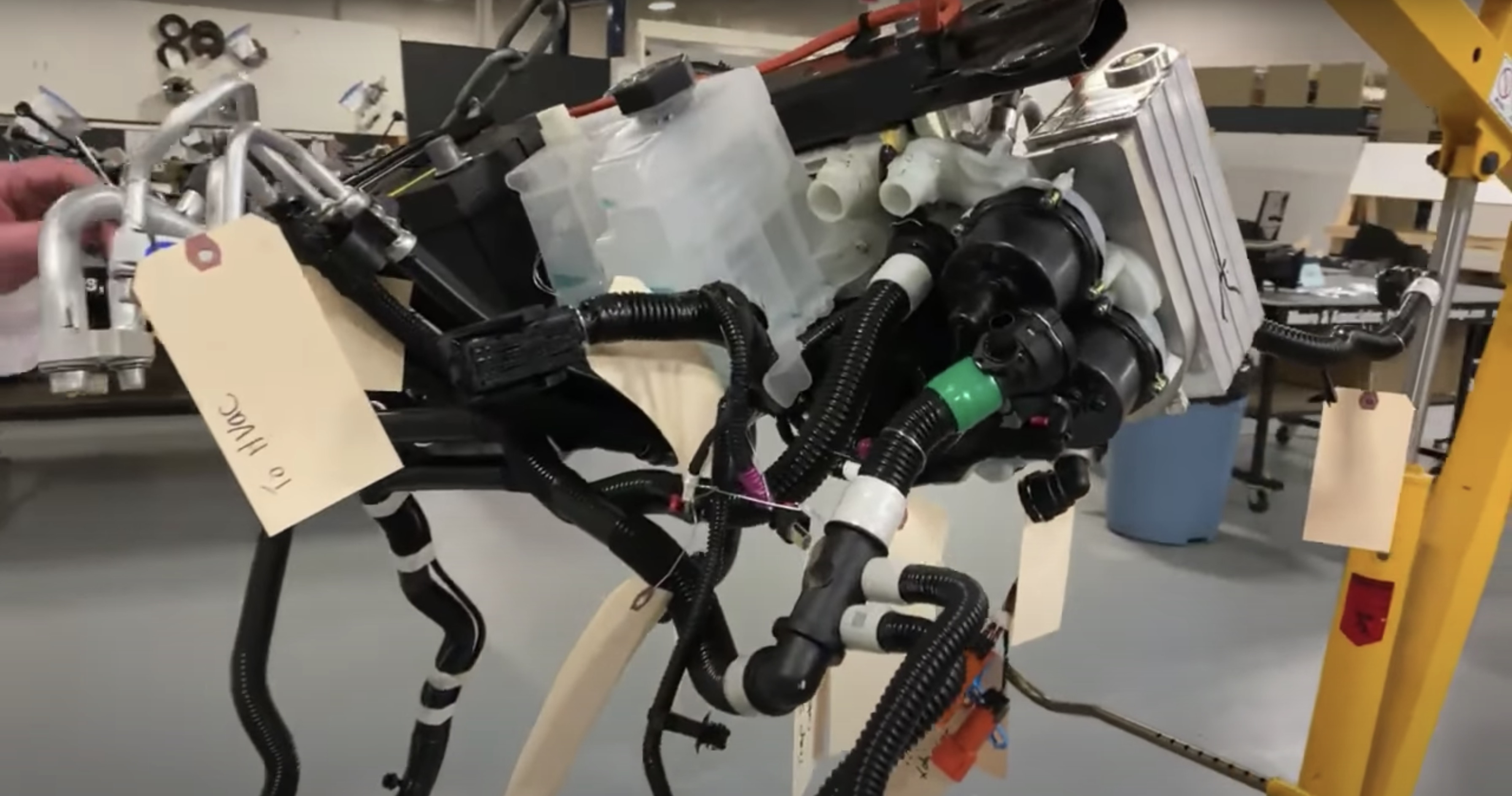 Munro said that they plan on dissecting it in the next few days, and they should release a video about it later this week.

I don’t know if Munro was hitting that bottle or using it as hand sanitizer, but this episode of the teardown was a strange one.

I don’t remember Elon promising a front motor retrofit in the Model 3, and it doesn’t sound like something Tesla would offer.

Also, 700 millimeters is less than a meter, so he clearly misspoke on that, or I am missing something?

But either way, we should cut him some slack, because it was still interesting to get a first look at Tesla’s Octovalve, and his previous episodes have been very informative.