Tesla delivery expectations at 77,000 cars — can they beat that?

Tesla is about to release its delivery and production numbers for the first quarter of 2020, and expectations have been revised down to 77,000 electric cars due to the coronavirus crisis.

Can they beat that?

Unlike most automakers who release monthly delivery and production numbers, Tesla releases its numbers quarterly — generally one to four days after the end of the quarter, which ended yesterday.

The first quarter is generally slow for automakers, but sources familiar with the matter told Electrek that Tesla was pushing hard with similar goals as its previous record quarter in some markets.

However, that was before the economy has taken a downturn due to the coronavirus pandemic, and that many businesses have been shutting down.

Wall Street analysts have been lowering their delivery target for Tesla over the past few days, and now the average is settling down at just over 77,000 units, according to Bloomberg:

Analysts on average estimate Tesla delivered roughly 77,400 cars worldwide last quarter, the first to include handovers of the new Model Y crossover. While that would be a jump from a disappointing result a year ago, it also would mark a more than 30% drop from the record deliveries Tesla reported for the last three months of 2019.

Here’s a chart of the different predictions from Wall Street: 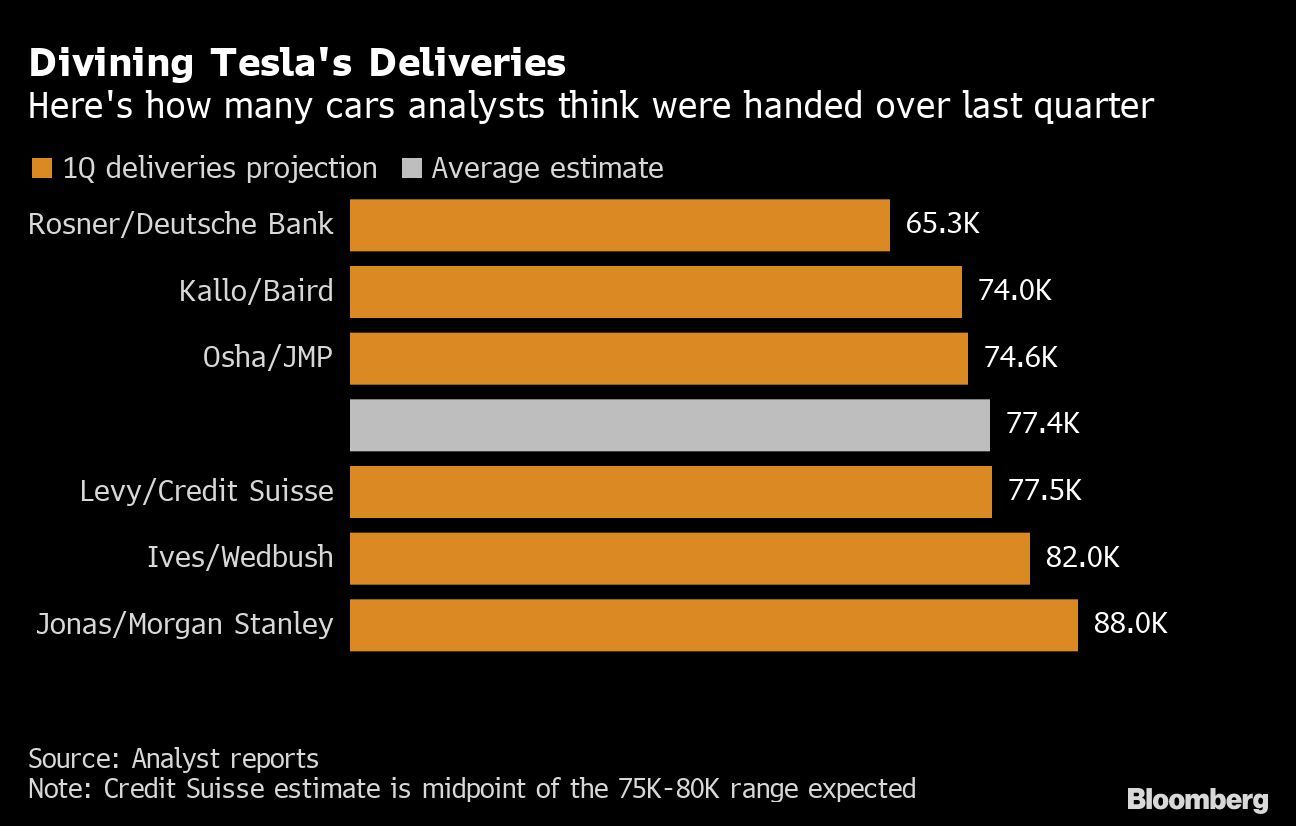 Some delivery numbers have already come in from Europe with about 11,000 Tesla vehicles confirmed, but there are several major European markets that haven’t reported their March numbers just yet.

In China, Tesla sales were at about 7,000 units in January and February, according to car registration numbers.

Numbers for the North American market haven’t been released yet.

Until today, I believed that 80,000 deliveries were achievable, but now I’m not so sure.

Unless there’s a big surprise in Germany, France, or the UK in March, it looks like Europe is going to be at no more than 15,000 units for Tesla in Q1 2020, which is a big drop not just from last quarter but also compared to Q1 2019.

With March deliveries, I doubt China will be more than 12,000 units total for the quarter, bringing the total outside North America to no more than 27,000 units.

It means that Tesla needs to have delivered over 50,000 cars in North America over the last three months.

I don’t think it’s impossible, but I’d be surprised since the automaker relies so much on its end-of-the-quarter push, and everything points to the push being very weak this time due to the current crisis.

Anything more than that would be a win in my book. I guess it depends on how many Model Y vehicles Tesla was able to produce and deliver.