Climate Crisis Weekly: Bears are waking up — because it’s too warm, too soon

Europe just had its warmest winter ever, the US has just had its hottest December and January on record — and as a result, the bears are waking up from hibernation early because they think it’s spring.

According to the Guardian, there have been bear sightings in February and early March in Russia, Finland, Canada, and the US. In Banff in Canada, a grizzly bear was spotted on March 3, and in Yellowstone Park in the US, another grizzly was seen on March 7.

According to Yellowstone’s website, male grizzlies normally come out of hibernation in mid- to late March, and females with cubs emerge later, in April to early May.

So why is this early emergence of the bears a problem? Because if they wake up too early, there isn’t enough of their omnivorous diet for them to eat. And if they don’t have enough to eat, they go in search of food, where a run-in with humans is a possibility as they rifle through garbage and gardens.

Chris Servheen, a former grizzly bear recovery coordinator at the US Fish and Wildlife Service, said:

If we see this as a continuing thing with climate change we will probably see more conflicts because there’s not much food for the bears. If bears come out early they will potentially seek food around people, such as in garbage, bird feeders and crops. The potential for conflict is certainly higher as they come out earlier.

Young Swedish activist Greta Thunberg is known, among many other things, for her #fridaysforfuture climate-crisis marches that attract thousands of people, week in, week out, all over the world. On Wednesday, Thunberg posted on Twitter that climate activists should stage digital strikes instead of in-person demonstrations to try to contain the spread of the coronavirus.

Thunberg suggested that activists post photos of themselves striking on Fridays with a sign featuring the hashtags #DigitalStrike and #ClimateStrikeOnline.

We young people are the least affected by this virus but it’s essential that we act in solidarity with the most vulnerable and that we act in the best interest of our common society.

We can’t solve a crisis without treating it as a crisis and we must unite behind experts and science.
This of course goes for all crises.

Now the experts urge us to avoid big public gatherings for a better chance to #flattenthecurve and slow the spreading of the Coronavirus. 1/4 pic.twitter.com/24o3a7J9ed

No one is immune from the devastating impacts of the #ClimateCrisis!

It is a race we can and must win!

And another one from London:

Day 1 of my #climatestrikeonline ,Week 7 of my 2020 weekly climate strike. You may be by yourself striking today but you are never alone in the battle for climate justice! #climatejustice @GretaThunberg @saoi4climate @AnnaKernahan @isabelle_ax @rikkednielsen @vanessa_vash pic.twitter.com/kySAt0o57r

Here is the greatest picture of me striking in home quarantine! #ClimateStrikeOnline pic.twitter.com/L0jzkt9rrP

The European commission will extend the “Right to Repair” law to cover phones, tablets, and laptops so that these tech goods consist of changeable and repairable parts. The current law sets energy-efficiency standards for computers, TVs, dishwashers, and washing machines.

“The commission is also considering an EU-wide scheme that would enable consumers to sell or return old phones, tablets, and chargers. It also wants to introduce a common charger,” reports the Guardian.

The linear growth model of ‘take, make, use, discard’ has reached its limits. With the growth of the world population and consumption, this linear model pushes us closer and closer to a resource crisis. The only way ahead is decoupling economic growth from extraction of primary resources and their environmental impacts.

Electrek’s Take: I don’t want to change out my smartphone every two years. I want to replace the battery and keep using it. Not only is it expensive, it also creates landfill waste. (And yes, I know smartphone companies want to sell new stuff.) This should be standard practice globally. And I’m all for the common charger — who doesn’t have various chargers all over the house?

Electrek reported on February 15 that penguins are suffering at the hand of climate change:

Scientists on an 11-day Greenpeace expedition to Antarctica’s Elephant Island to count chinstrap penguin nests found that thousands of penguins are missing. One chinstrap penguin colony has decreased by 77% in nearly 50 years.

This video pretty much sums up what’s going on with the penguins, and “Valeska,” you’re right — I experienced about 12 emotions in 27 seconds watching this.

i smiled i screamed i cried i cheered all in 27 seconds pic.twitter.com/9JMOcx8qqI 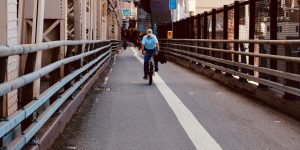 On Wednesday, New York’s Department of Transportation said that it’s seen a 50% increase in cycling traffic on the bridges that connect Manhattan to Brooklyn and Queens compared to March 2019. Also, New York City’s bike-share program, Citi Bike, announced yesterday that rides are up 67% compared to this time last year.

Transportation Alternatives is pushing for the mayor to encourage more people to walk and cycle by putting conditions in place that make it even safer for cyclists, such as pop-up bike lanes and a subsidized Citi Bike program.

It’s warm — global warming, ahem — so people are outdoors. But it’s good to see people heeding De Blasio’s guidelines and pedaling around the city the green way to keep themselves safe and out of big crowds.

Grist’s “Ask Umbra” column on Thursday saw a reader ask about using single-use wipes, gloves, etc to try to stave off the coronavirus:

Should I feel guilty about buying so much plastic-wrapped and single-use stuff for this quarantine nightmare? — Stuck Here Using Throwaways Instead of… Not

You can read Umbra’s full answer by clicking the link above, but the spoiler is is no, the guilt isn’t necessary. Umbra had a chat about it with Rolf Halden, professor of health engineering at Arizona State University:

While he’s enthused that people are critically thinking about how much plastic they consume, whatever’s being bought in the name of COVID-19 prevention ‘is a drop in the bucket compared to all that we needlessly consume,’ he said. ‘I think the answer is very clear: Don’t compromise health to save a little bit of plastic.’

So give yourself a break, and stay healthy. (She said, who just felt guilty about wiping down my computer and phone with a disposable wipe for electronics.) 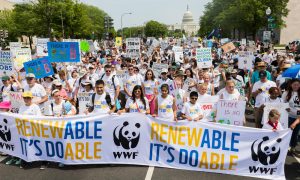 Let’s be honest: We’re mostly all more than a little stressed out about COVID-19, and the unknown fallout to come from this pandemic. It’s a lot to take in. So I’ll leave you with some good news from the World Wildlife Fund in an article titled, “The Good News About Climate Change.” Click here to read the details, but here are the highlights on why we have reason to hope:

Stay safe, people, and to paraphrase Greta Thunberg, act in the best interest of society.