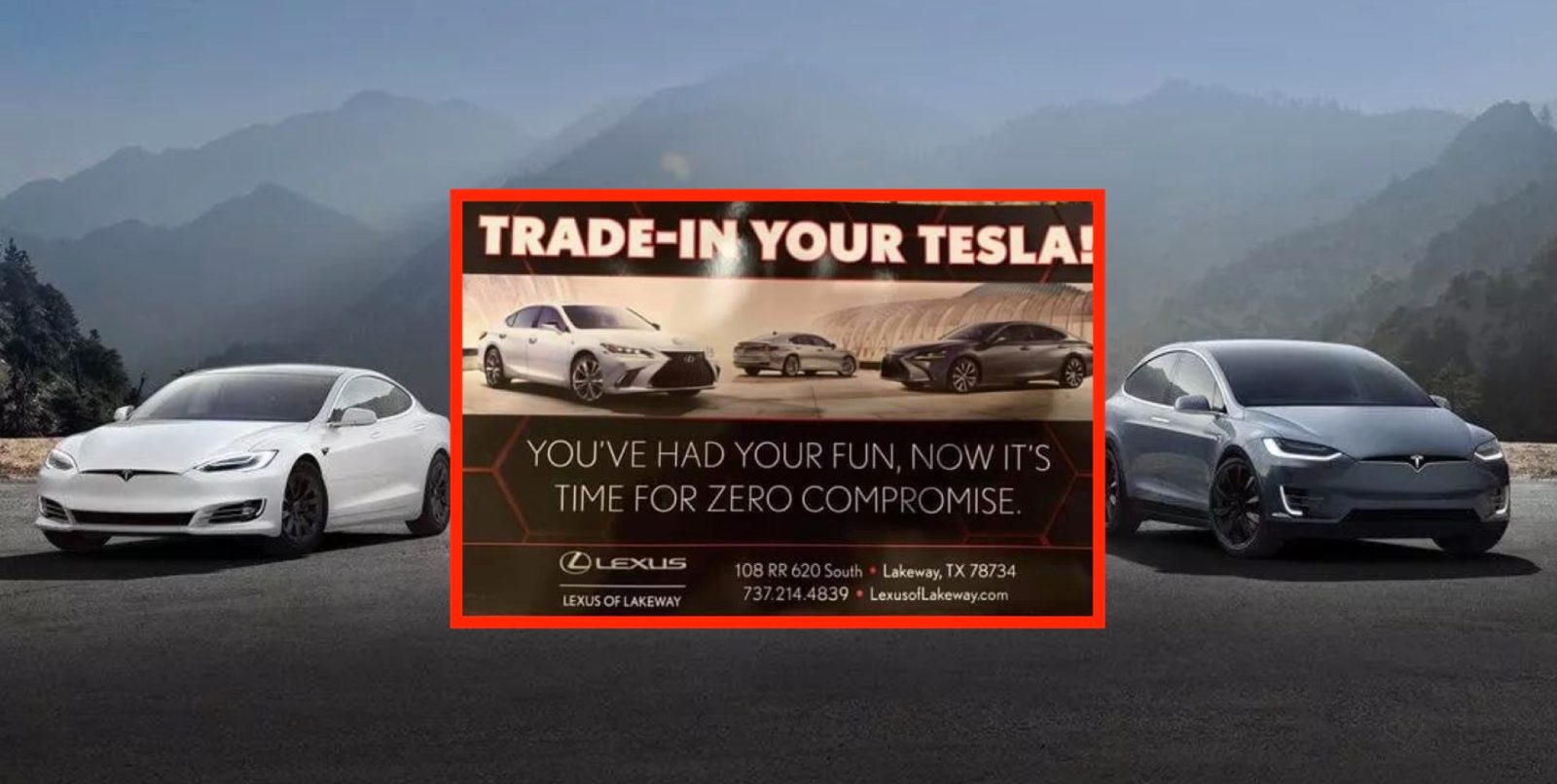 A Lexus dealer in Texas is spamming Tesla owners to encourage them to trade in their Tesla vehicle, telling them: “You’ve had your fun, now it’s time for zero compromise.”

Lexus and its parent company Toyota have a bad track record of advertising when it comes to electric vehicles.

In 2018, they advertised their hybrids (HEVs without plugs) as “self-charging,” having “infinite range,” while trash talking all-electric vehicles in the process.

Those efforts were directly from the automaker, but now the dealers are also getting involved in the anti-electric advertising.

Lexus of Lakeway a Lexus dealer near Austin, managed to obtain Tesla owners’ information in the region and spammed them with a flyer stating:

Trade in your Tesla! You’ve had your fun, now it’s time for zero compromise.

Here’s a picture of the Lexus flyer from local Tesla owner Josh Caskey: 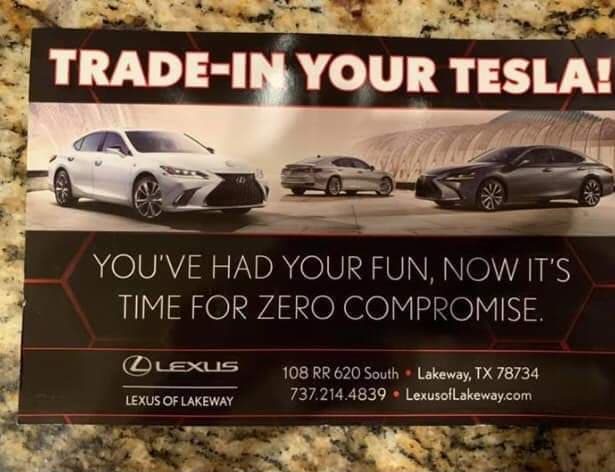 At this point, it’s not clear how the Lexus dealership got hold of Tesla owners’ contact details.

While Tesla had a great impact on the premium auto market, Lexus has fared fairly well. The Lexus IS, which has Model 3 as its closest competitor from Tesla, has stable sales since the launch of the electric vehicle.

In 2018, Tesla revealed the top 5 cars Tesla Model 3 buyers are trading in, and the Prius made the top of the list:

Toyota later admitted that the Model 3 has been affecting its Prius sales.

Update: Caskey sent Electrek the other side of the mailer and it also include a promise of a $1,000 “aditional discount” for Tesla owners, “top dollar” for Tesla trade-ins, and a bunch of EV misinformation: 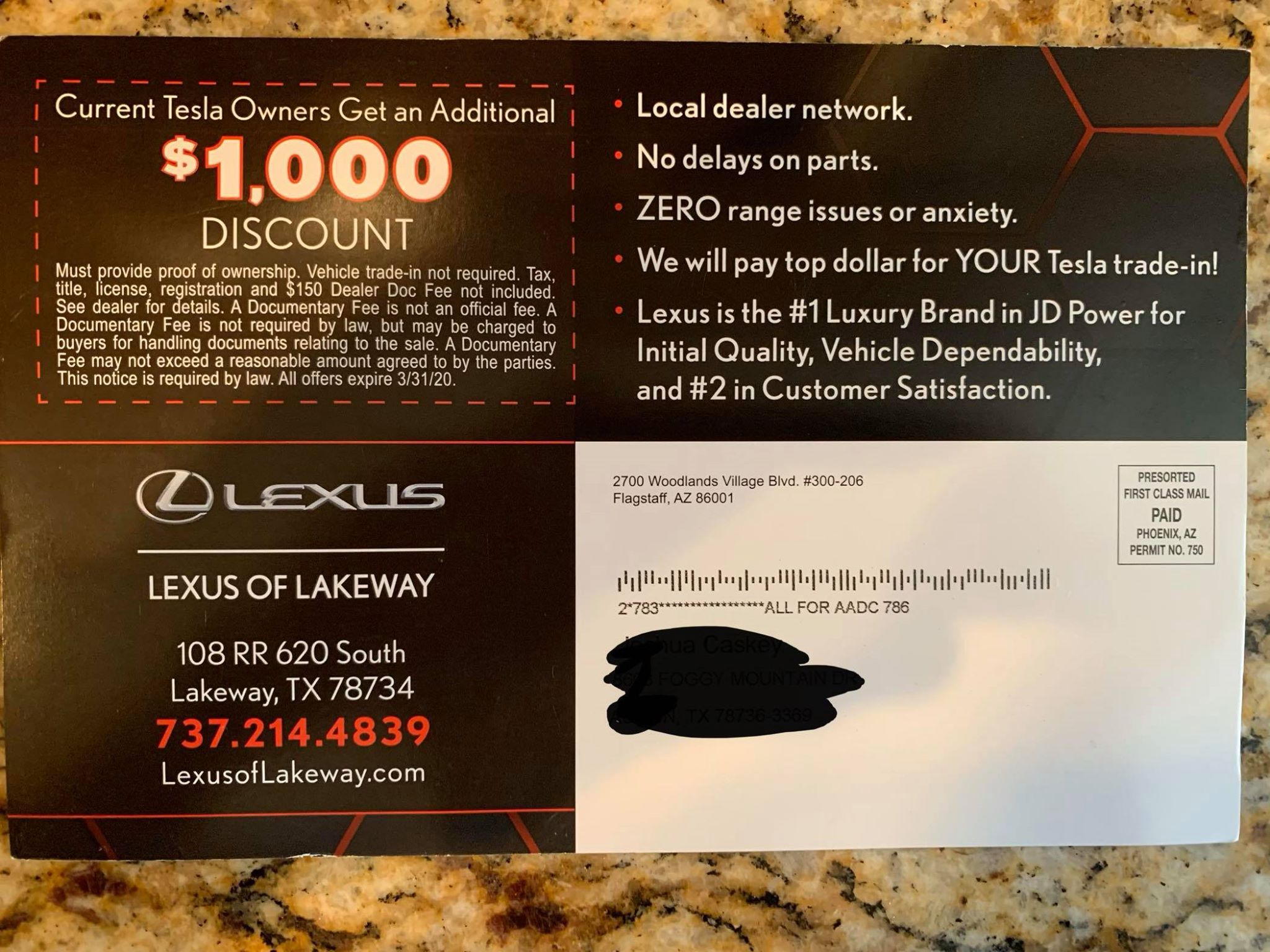 This is pretty bad advertising. First of all, Tesla has the best customer satisfaction rate ever. It’s not smart to spend money on trying to make satisfied customers trade in their cars.

Also, they even admit that owners are having fun with their Tesla vehicles.

As for “zero compromise,” that’s clear false advertising. To start with, how about the fact that now I have to deal with a sub-optimal sale model of having to go through a third-party dealership like Lexus of Lakeway?

That’s a compromise right there.