Cleveland Cyclewerks, a gas-powered motorcycle manufacturer, will be unveiling its first-ever electric motorcycle next month.

Tech specs had been few and far between until recently when the company spilled the beans and shared a number of impressive specs for the bike.

The bike, currently shrouded in mystery under the project name Falcon Rising, will be available in two models: Falcon 01 and Falcon BLK.

The Falcon 01 will be a lower-powered version of the bike, while the Falcon BLK will offer higher speeds and power levels.

Cleveland Cyclewerks claims the Falcon BLK electric motorcycle will be capable of reaching a top speed of at least 85 mph (137 km/h).

The company also provided a range figure of 180 miles (290 km) on a single charge. However, with a 4.6 kWh battery pack, that range figure is likely at a much slower speed.

That level of efficiency is based on a 25 Wh/mi consumption level, which would require a speed of around 20 mph (32 km/h) or less for a vehicle of this size. 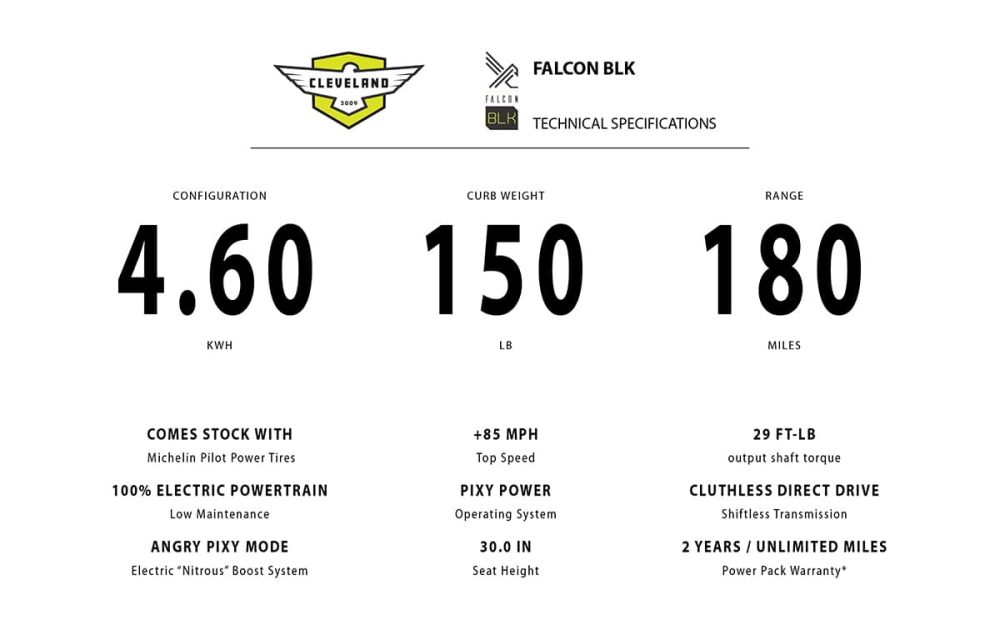 Speaking of size, the company has listed a 150 lb (68 kg) curb weight for the Falcon BLK electric motorcycle, which would give it one of the best speed/weight ratios in the industry. It’s not very often that an electric motorcycle capable of highway speeds can weigh less than its rider.

Other information revealed about the bike includes a 2-year battery warranty, a 30-inch seat height and an “Angry Pixie” mode, which presumably temporarily increases the current limit in the controller to provide a boost of power.

Don’t expect the bikes to come cheap though. While the Falcon 01 will start with an already lofty price of $7,999, the Falcon BLK will set you back $14,995. That’s pricier than a Zero FXS while offering a smaller battery and lower power. Though while we haven’t seen the final design of the Falcon BLK, perhaps Cleveland Cyclewerks is banking on its novel design being able to win over riders and convincing them to open their wallets. 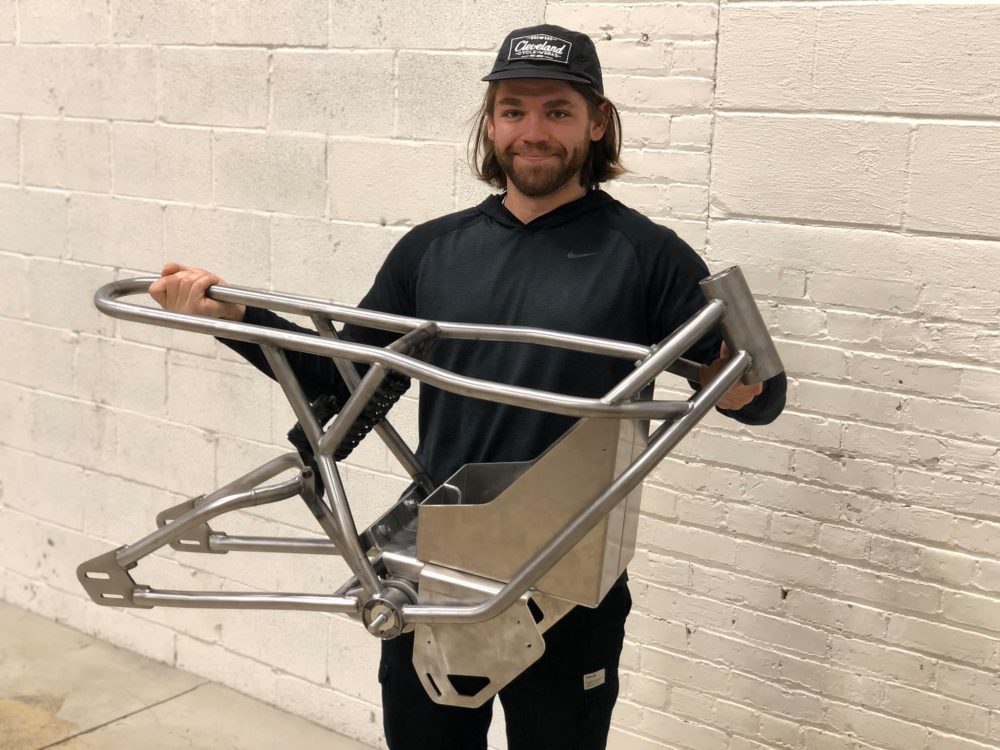 The company also released an image showing the wishbone frame of the motorcycle and the battery carrier mounted inside the frame. Previous teaser images have shown a slim battery pack with a handle on top, indicating the battery would be removable. With 4.6 kWh of capacity, it’s safe to say the battery will likely be comprised of two 2.3 kWh packs to reduce the weight to a manageable level. Most removable batteries of capacities around 2.3 kWh are at least 35 lb (16 kg), so it is unlikely that a single 4.6 kWh battery would be manageable by the average rider.

Cleveland Cyclewerks has announced a number of partnerships with companies that are helping in the development or production process of the electric motorcycle. These include partnerships with TorrMetal, Brite Energy Innovations, Manufacturing Works, CARD Performance, Sphere Brakes, and HMF Performance.

The debut for the Falcon Rising project is set for March 20th, so make sure to check back to (finally) see the reveal of the new electric motorcycle.