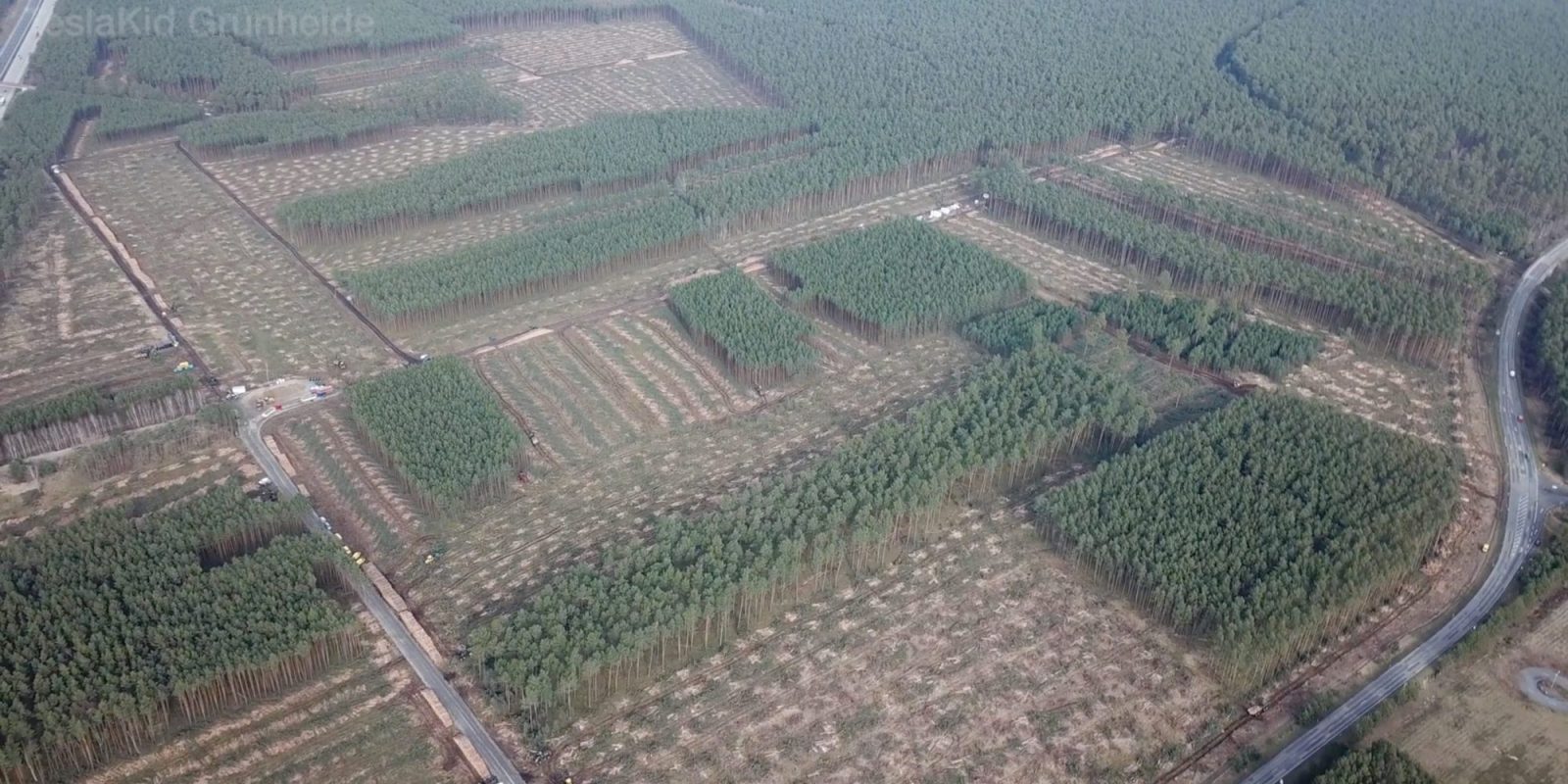 Giga Berlin construction experienced a temporary setback late last week, as construction was temporarily halted on the project.  The halt came as a result of complaints from local environmental groups.  Representatives of Die Grünen, the national Green party, on the other hand, opposed the complaint and supported the factory project.

The halt came after Tesla had already started clearing the forest.  Tesla spent about two days on work, and already made quite extensive progress.  We reported on drone video of the site which was posted just before the halt came through.

Clearing happens swiftly with forests like these because this is a planted forest, not a natural one.  Thus, trees are relatively uniform in size and spacing, making an easier job for machines to remove them.

The issue in question for the halt was whether Tesla had gone through all required approvals before beginning work.  While Tesla got preliminary permission to start work, there was still the possibility that a final approval might come back negative.

Brandenburg Green League, who filed the complaint, claimed they “don’t want to prevent Tesla,” but rather that the company should be treated the same as all others.  They thought that Tesla hadn’t gone through proper approvals and was flouting the law.  A German court initially agreed that this complaint was not without merit, and thus ordered the temporary freeze.

There was swift backlash against the halt by some groups, including national Green politicians.  Oliver Kirscher, a Green party vice chairman in the Bundestag, said in support of the project (translated through deepl):

“To turn a pine wood plantation into a battlefield is absurd.  This has nothing to do with nature conservation! We need investment in sustainable infrastructure and future-proof industry and we must also make land available for this. We have an unprecedented extinction of species in Germany, but that has nothing to do with Tesla-Giga-Factories or wind energy. We need nature and species protection where it can make a difference and not proxy disputes based on pine plantations”.

Many others said that they would wait for OVG’s decision, but that they were worried about the effects this halt in construction would have on the attractiveness of Germany for foreign companies looking to build industry there.

Brandenburg Green League was joined by another group, the Association for Landscape Conservation and Species Protection in Bavaria (VLAB).  Despite their green-sounding name, VLAB is a group which was formed to oppose the installation of wind turbines and solar power systems in Germany, and support the use of fossil fuels for energy.  They are also associated with some groups that deny climate change.

The court decision came quickly because Tesla needs to finish clearing the forest before early March.  Laws don’t allow tree clearing after this time, because that’s when the mating season for birds begins.  If Tesla doesn’t finish clearing by this time, then they can’t clear trees until autumn, which would result in a 6-month delay.

Tesla currently plans to open the factory in mid-2021, so they’re on a tight timeline already.