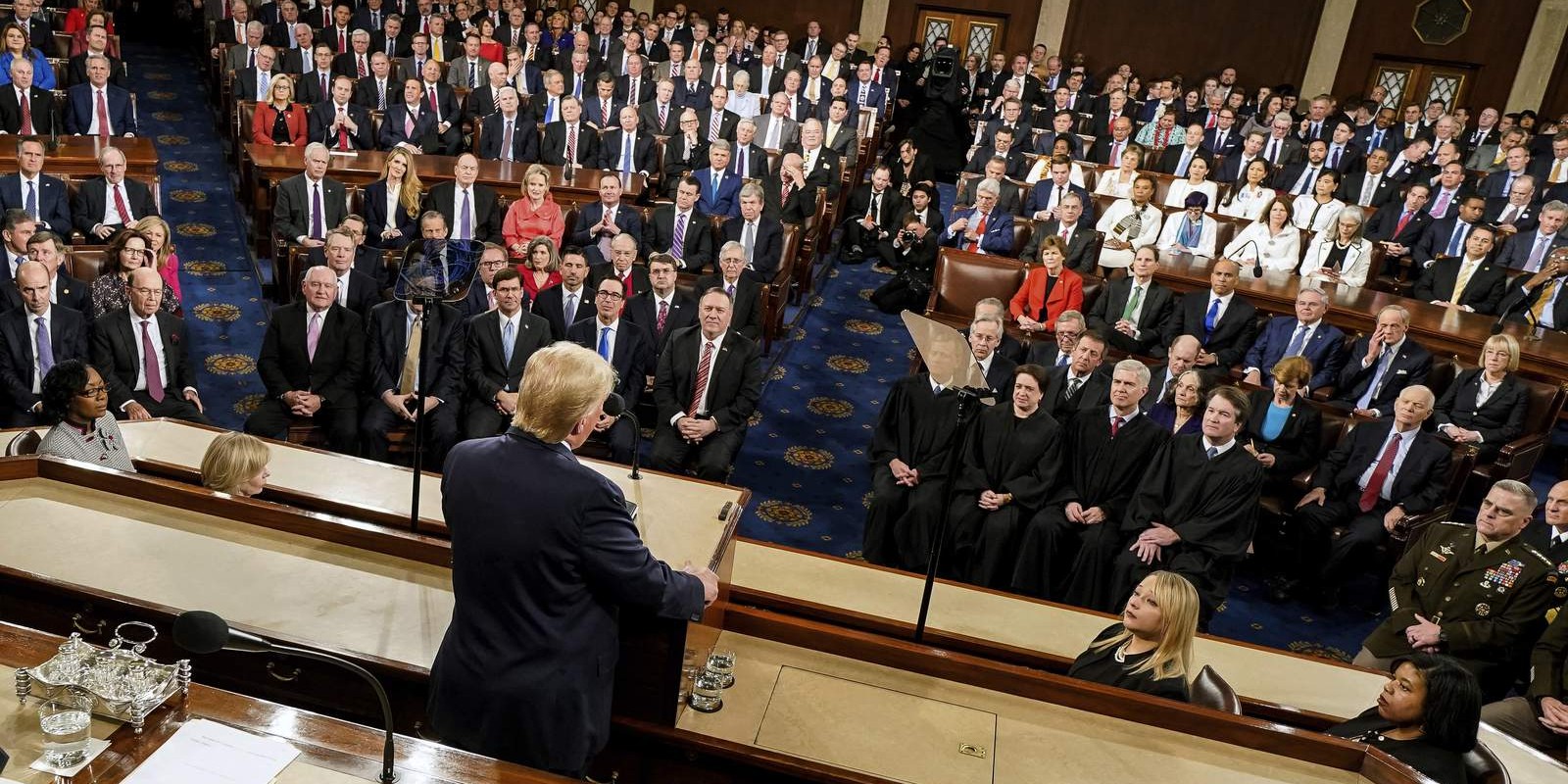 On Tuesday, February 4, Donald Trump gave his State of the Union speech.

We can count on Donald Trump to extol the virtues of dirty fossil fuels but to ignore the potential of wind, solar, and energy efficiency.

Here’s what Trump did have to say about energy and the environment below, and each of his statements is followed by a fact check.

Thanks to our bold regulatory reduction campaign, the United States has become the No. 1 producer of oil and natural gas anywhere in the world, by far.

Fact check: This is a statement he’s made before in speeches. Trump’s 137 environmental protection deregulations have had no impact on the US being the No. 1 producer of oil and gas (and besides, it’s not something to be proud of). The US Energy Information Administration says the US has been the world’s top natural gas producer since 2009, top petroleum hydrocarbon producer since 2013, and top crude oil producer since 2018. It’s because of a shale boom that started in 2011.

With the tremendous progress we have made over the past three years, America is now energy independent. And energy jobs, like so many elements of our country, are at a record high.

Fact check: Politifact defines energy independence as “producing as much energy as is consumed domestically.” The US consumed more energy than it produced in 2019, and still imports oil from the Middle East. But the gap between consumption and production is narrowing, and there have been some months where more was produced and consumed. Politifact rated Trump’s “energy independence” statement as “Half True.”

As for energy jobs being at a “record high,” we can’t vouch for the “record” claim, but energy jobs are at a high if compared to recent years.

Energy efficiency employers projected the highest growth rate in 2019 (7.8%), despite the losses of almost 7,000 coal jobs. Employment in oil and gas extraction and support services is at its highest level since its recent high in the fall of 2014.

Alternative fuels and hybrid vehicles employment experienced a significant rebound from a year earlier, adding 34,000 jobs, driven by the release of the Tesla Model 3. There was continued growth of the natural gas electric power generation and wind workforces, as their cost advantage pushed out older coal-fired units. So Electrek rates the statement of energy job growth as true (except for the “record high” part, which is unverified).

To protect the environment, days ago I announced the United States will join the One Trillion Trees Initiative, an ambitious effort to bring together government and private sector to plant new trees in America and all around the world.

Fact check: This is where I’m going to let CBS News meteorologist and climate specialist Jeff Berardelli do the talking. Trees alone aren’t really going to cut it in dealing with the biggest issue we’ve ever faced — the words “climate change,” which Trump refused to utter — and why Trump’s aggressive slashing of 137 environmental regulations are so damaging in the long term:

Since we’re on the subject of the Trump administration and the environment, here’s what nine major environmental groups think.

Alaska Wilderness League Action, Clean Water Action, Defenders of Wildlife, Earthjustice, EDF Action, Friends of the Earth, League of Conservation Voters, Sierra Club, and The Wilderness Society issued the following statement on February 4, in advance of the State of the Union address:

Donald Trump’s administration has unleashed an unprecedented assault on our environment and the health of our communities. His policies threaten our climate, air, water, public lands, wildlife, and oceans; no amount of his greenwashing can change the simple fact: Donald Trump has been the worst president for our environment in history. Unfortunately, our children will pay the costs of this president’s recklessness. Our organizations have repeatedly fought back against these attacks and we will continue to fight to ensure that our kids don’t bear the brunt of the Trump administration’s anti-environmental agenda.

It’s not really surprising that they feel that way.

A brand new study in the journal Science, “Climate Change Contributes to Widespread Declines Among Bumblebees Across Continents,” has found that the bumblebee population is in rapid decline due to climbing temperatures. The study was conducted by researchers from the University of Ottawa and University College London (UCL).

The Guardian explains their methods:

The team used data collected over a 115-year period on 66 bumblebee species across North America and Europe to develop a model simulating ‘climate chaos’ scenarios. They were able to see how bumblebee populations had changed over the years by comparing where the insects were now to where they used to be.

We were surprised by how much climate change has already caused bumblebee declines. Our findings suggest that much larger declines are likely if climate change accelerates in the coming years, showing that we need substantial efforts to reduce climate change if we are to preserve bumblebee diversity.

Bumblebees play a vital role throughout ecosystems. Encyclopedia Britannica explains what would happen if all the bees died — you can read that here.

However — the researchers say that bees can be protected with shelters such as trees or shrubs to keep them out of the heat — but climate change itself ultimately needs to be addressed.

Antarctica reached 65F or 18.3C yesterday. It is summertime at the South Pole, but this isn’t normal. It’s the hottest temperature ever recorded in Antarctica.

For comparison, my temperature in St. Petersburg, Florida, yesterday was 63F, and my colleague Jameson Dow’s morning temperature in southern California was 52F. (Just let that sink in for a minute.)

The Antarctic temperature was taken at an Argentinian research station on Esperanza, the peninsula on the northern tip of Antarctica that’s been recording temperature data since 1961.

According to NASA, the ice sheets on Antarctica are currently losing 127 gigatonnes of mass every year.

Author and environmentalist Bill McKibben wrote an op-ed for the Guardian about Canada and climate change. You can read the entire opinion piece here, but here’s an excerpt that explains why he feels Canada is a climate-change hypocrite: 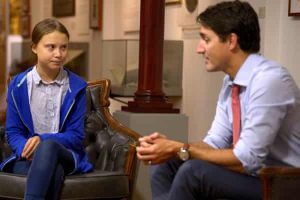 Canada… elected a government that believes the climate crisis is real and dangerous — and with good reason, since the nation’s Arctic territories give it a front-row seat to the fastest warming on Earth. Yet the country’s leaders seem likely in the next few weeks to approve a vast new tar sands mine which will pour carbon into the atmosphere through the 2060s. They know — yet they can’t bring themselves to act on the knowledge. Now that is cause for despair.

Here’s how Justin Trudeau, recently re-elected as Canada’s prime minister, put it in a speech to cheering Texas oilmen a couple of years ago: ‘No country would find 173 billion barrels of oil in the ground and leave them there.’ That is to say, Canada, which is 0.5% of the planet’s population, plans to use up nearly a third of the planet’s remaining carbon budget.

Trudeau, for all his charms, doesn’t get to have it both ways: if you can’t bring yourself to stop a brand-new tar sands mine then you’re not a climate leader.

Nike’s new CEO, John Donahoe, talked about climate change and sustainability on CNBC’s Closing Bell on Thursday, and what the sports giant is doing to reduce emissions and promote sustainability:

Climate change is impacting sport. In fact, Tokyo is likely to be the warmest Olympics on record. And so our athletes care about this topic. And so Nike is investing heavily in sustainability. And you’re going to see some incredible products unveiled [Wednesday, at its Summer 2020 Collaborations]. 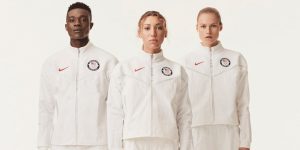 And so, for instance, all the Olympic US athletes will be wearing a Nike jacket and Nike pants that are made of 100% recycled materials. Nike is one of the largest recyclers of polyester in the world, over a billion plastic bottles are recycled each year into NBA jerseys, or the jerseys that the women’s US soccer team wore last year in the World Cup, so the investment and commitment to innovating in a sustainable way is something that matters to our athletes, and it matters to Nike.

Last September, Nike announced in its Move to Zero initiative that it would power its owned-and-operated facilities with 100% green energy by 2025 and reduce emissions across its global supply chain by 30% by 2030, in accordance with the Paris Agreement.

Australia’s had a pretty rough time of it lately, with devastating bushfires. These Australian teens have a lot to say about statements made by Australian politicians when “our country is literally on fire.”

Some adults ridicule teens for fighting to save our planet — and some are just downright abusive. But what’s so unreasonable about, “We just can’t do without breathable air”? And young people have wised up that if they make noise, people listen and talk about the issue, whether they like what teens are saying or not. Positive change is usually borne out of discomfort, or worse.

Thanks to BuzzFeedOz for giving these kids a platform to ask excellent questions and conduct intelligent conversations. Watch the video below.