Lucid: Tesla hasn’t cracked it, we can take it to whole new level of range and efficiency

Lucid Air is finally going to come to market this year after a delay of a few years – likely becoming the first of the new wave of California EV startups to bring an electric car to production after Tesla.

During the delay, Lucid didn’t sit on their hands waiting for capital to go to production. They improved their first electric car and now we’ve learned about some of those improvements and Lucid’s strategy in a new interview with CEO and CTO Peter Rawlinson.

He says that “Tesla hasn’t cracked it” and Lucid can bring electric cars to “a whole new level of range and efficiency.”

In 2017, Lucid Motors announced an aggressive $60,000 base price for its luxury all-electric sedan, the Lucid Air, with a range of 240 miles and some other interesting specs.

At the time, Lucid also unveiled its plan for a $700 million factory in Arizona to produce the Air in 2018.

However, they had difficulties raising the capital needed to start construction of the plant.

Late in 2018, Lucid secured over $1 billion in investments from Saudi Arabia, which put them back on track for their 2017 plans.

A few months ago, they started construction on the Arizona factory and they said that they planned for the first deliveries to happen by the end of 2020.

The timeline seems aggressive, but we sat down with Peter Rawlinson, Lucid CEO and CTO, at the Bloomberg BNEF Summit in San Francisco today and he is confident that they are going to be able to stick to it.

He confirmed to Electrek that they are now installing the roof on the structure of the factory and they are going to start building the production lines. 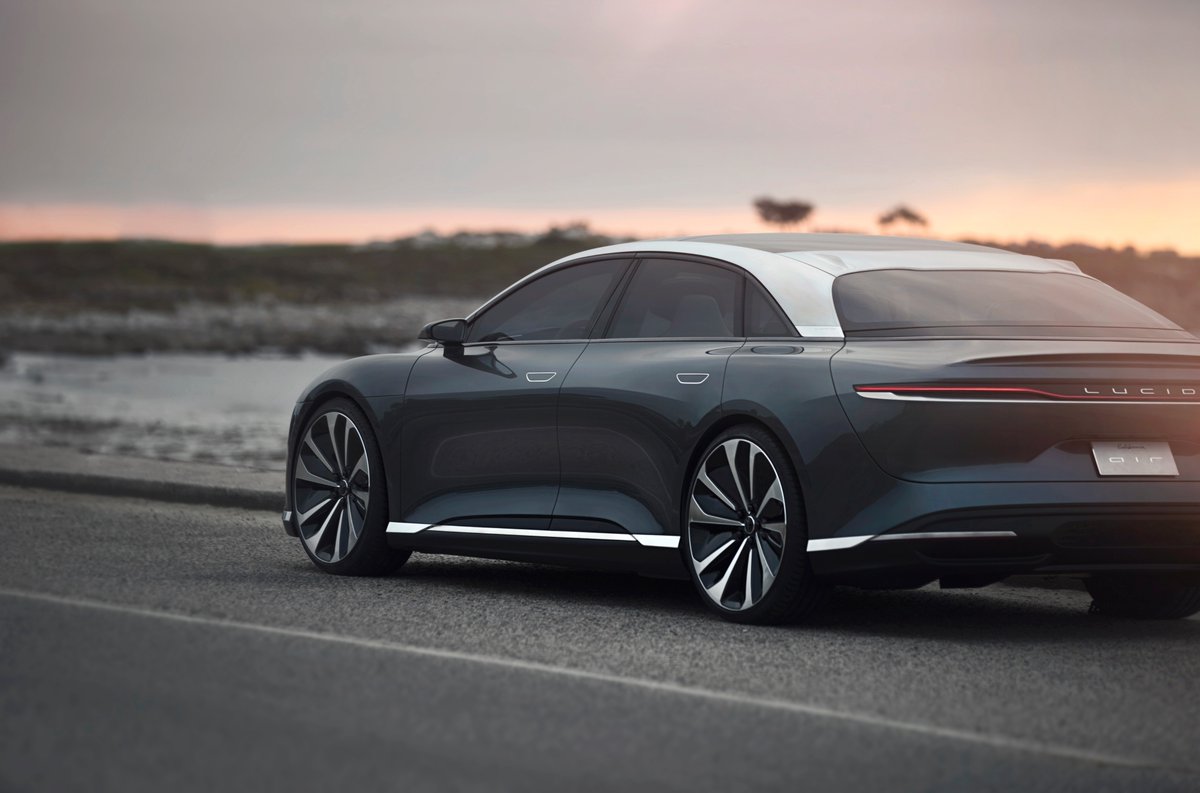 At the moment, they are building 80 pre-production prototypes and testing out production processes at their facility in California. The manufacturing team in Arizona will use build on top of the work being done in California to deploy the production capacity.

The vehicle that they are going to build is not exactly the same that was unveiled in 2017.

The production version and all the specs are going to be unveiled at the New York Auto Show in April, but we managed to get a few new details about the Lucid Air in our interview with Rawlinson.

The most interesting update is that they are launching a new 900-volt system with the Lucid Air:

It’s going to be a first in a passenger electric vehicle and Rawlinson says that it is going to enable a more efficient powertrain that will go over 400 miles of range.

“Tesla hasn’t cracked it. We can take it to a whole new level of range and efficiency.”

In our interview, he said that they currently have Lucid Air going 400 miles on a single charge based on their EPA cycle estimation.

As we reported last week, Tesla CEO Elon Musk says that the company is getting close to making the Model S a 400-mile electric car.

Rawlinson said that their car is going to achieve 4 or even 5 miles per kWh and dethrone Tesla has the range and efficiency king of the electric car industry.

When Lucid first unveiled the Air in 2017, they announced three battery pack options with up to 130 kWh of capacity and 400 miles of range.

Now Rawlinson confirmed to Electrek that the top range version of the Air will get 400 miles, but it will use a smaller pack than 130 kWh – thanks to the efficiency gains they’ve made over the last few years.

He mentioned several improvements throughout the entire drive unit, which Rawlinson says is so small that he can pick it up despite the fact that it can output 1,000 hp.

To gain some efficiency, they went as far as designing a new shape of gear for the gearbox.

It’s not all good news though.

The CEO also confirmed that they have dropped the lower-end versions of the Air and now says that they will focus on the higher-end versions, which will start north of $100,000.

Update: there was apparently some miscommunication here. Lucid reached out to clarify that they still plan on making the cheaper versions, but they will come later.

Rawlinson made it clear that with Lucid’s first vehicle, he is going after German luxury vehicles, like the Mercedes-Benz S-Class.

He believes that as a core technology company, they can get the electric car technology right, much like Tesla did, but they see a lot of room of improvements with interior design and finish to have a more competitive product against German luxury vehicles.

The production version of the Lucid Air is going to be unveiled in April at the New York Auto show. All specs and pricing information are going to be released at that time.

I came out of this interview impressed.

To be fair, I was a little biased going in. Rawlinson was the chief engineer of the Model S program from 2009 to 2012, critical years for Tesla, and I still have a Model S from this era that I love.

But he was also saying a lot of things that I completely agree with.

Rawlinson doesn’t believe that 400-mile vehicles make sense for mass-market vehicles. He believes in the importance of smaller battery packs achieving over 200 miles of range with an efficient powertrain.

Lucid plans to leverage its work developing a 400-mile efficient powertrain to build even more efficient shorter-range systems in mass-market vehicles. Whether those vehicles will be built by Lucid remains to be determined. They are still open to supplying powertrain, which was the original business model of the company when it was still called Atieva.

In the meantime, he believes that a 400-mile electric car is going to help change the perception of EVs and in the long term, the market should see that vehicles with over 200 miles fit the needs of most people when combined with convenient fast charging.

Where I think Lucid is taking a risk is how they are going to provide this convenient fast charging. They partnered with Electrify America.

As we reported earlier this week, Electrify America has made great progress on its charging network, but it’s always a risk to rely on a third-party to provide such an important part of your user experience.

Overall, I am now fairly optimistic about Lucid’s prospects. I remain skeptical about the timeline to production, but I am on board with their overall strategy.

Let’s see what they can do this year.