EGEB: UK to put 10 million EVs on the road within 10 years

Yes to EVs, no to natural gas in the UK

UK energy regulator Ofgem has announced how the UK will have to change the way it travels and heats homes to meet the British government’s target of net zero carbon emissions by 2050. The changes will be powered by wind farms, and Ofgem says it will be considerably cheaper than gas, coal, and oil.

Ofgem wants UK EV owners to charge them at the night, during off-peak hours, and then sell it back to the national grid at a higher price at peak periods. The power stored in the cars’ batteries will reduce the need to build gas-fired power stations.

Further, natural gas heating will need to be replaced by electric heating, or a gas system run on hydrogen, where the emissions are water.

One of the most common questions about solar’s effectiveness is, “But what happens at night when the sun goes down?” The short answer is battery storage, but researchers at the University of California, Davis have released a new paper published in the journal ACS Photonics that says that “anti-solar panels” can generate electricity.

Solar panels absorb the sun’s heat and generate energy. At night, if a panel is pointed toward Earth, then it could capture the Earth’s invisible infrared light. The paper claims an anti-solar panel could generate about 25% of the electricity at night that a solar panel generates during the day.

The nighttime device uses a thermoradiative cell to generate electricity, and it has to be made of something that can capture extremely long-wavelength light. The UC Davis team is working on prototypes, and considering mercury alloys. 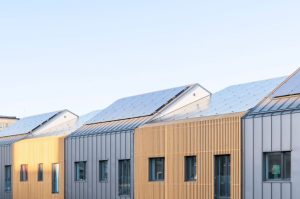 Each 150-square-meter home is made of six factory-built prefab modules that arrive to the building site complete. Onsite, the facade is assembled, and the seams between the modules are finished. The facades are made of wood, steel, and plaster.

Houses facing east or west have white plaster, and houses facing north or south are made of either dark silver steel or steel with wood lattice.

All of the homes feature solar panels:

As the solar panels are designed to face south, the architects had to come up with a unique roof designed for both appearance and practicality. Houses that were east-west facing have sawtooth roofs with customized ridgelines and a 45-degree angle for the panels, while homes with north-south facades and east-west ridgelines have asymmetrical, mirrored roofs.