Tesla Cybertruck knockoffs are the hottest DIY project on the internet

Tesla announced the Cybertruck to much fanfare two months ago, and the internet was immediately flooded with reactions. The news about the truck reached far and wide, but people were polarized over its looks. It even disrupted the holiday season with these ugly sweaters.

The Cybertruck’s strange appearance hasn’t stopped the do-it-yourself crowd, though, as it seems to have inspired a lot of knockoffs, likely in part thanks to its easy-to-replicate angular form. We’ve collected some of the best ones from around the world below.

Our first project comes from Chinese YouTube channel MakerBeta, which took a scrapped Jinbei van and turned it into a pretty sleek take on the Cybertruck. Beyond the axles and the (rearranged) powertrain, there wasn’t much left of the Jinbei by the time they got done with it. The final product looks a bit like a hotrodded, chopped Cybertruck, and even has the Cybertruck’s trademark LED headlight shape:

The Russians seem particularly interested in the Cybertruck, as we’ve seen multiple projects coming from that country.

This one was built by Youtube channel “Cannon Garage” (Пушка Гараж) on an old wrecked Lada. Once again, they made some pretty enormous modifications requiring a lot of welding and resulting in something that bears little resemblance to the wreck it was built on top of. It comes complete with a mock “tonneau cover” — which works more like a liftgate.

The video is long and in Russian, though YouTube can generate auto-translated subtitles:

If that 43-minute video is too long, check out ABC News’ one-minute summary. Or Cannon Garage’s follow-up video with ridiculous Christmas lights all over the truck.  We’ll leave it to the reader to decide if these lights represent an improvement on the Cybertruck’s controversial design.

The next Russian invention is from Garage 54, built on top of an old UAZ Russian military vehicle chassis.  This one also stripped basically everything away from the chassis, and resulted in a reasonably accurate-looking body in the end:

Here’s another update from Garage 54 showing the truck driving in snow, and it’s also in Russian.

The American take on this project was perhaps a little less complete than the aforementioned attempts. A jokester decided to make a fake “Cybertruck” just by attaching sheets of cardboard and foam to an F-150, then drive it around telling people it was a real prototype. There was an attempt, at least…

On the other end of the spectrum, our neighbors to the North from Canadian YouTube channel The Hacksmith have produced perhaps the most complete project so far.

They’ve been building a 1:2 scale Cybertruck from the ground up, complete with their own custom electric powertrain. Rather than retrofitting an existing vehicle, particularly an existing gas vehicle (yikes!), they’re doing their own thing from the ground up. They’ve released three videos so far, though the project isn’t quite done yet:

Even the kids are getting in on the fun. This German dad turned a 250W go-kart into a mini Cybertruck with a little bit of wood, some paint, and some 3D printed parts:

And another one re-created Tesla’s (meaningless) tug-of-war stunt, pitting a mini Cybertruck against a Mercedes SUV. No word on whether Mercedes will participate in a rematch:

Kids and adults can also build their own with a custom LEGO set from brickworms, though the set is a bit pricey at €299.90 (though there is an introductory price of €269 until Feb 15th). It even comes with a “Cyberquad”! 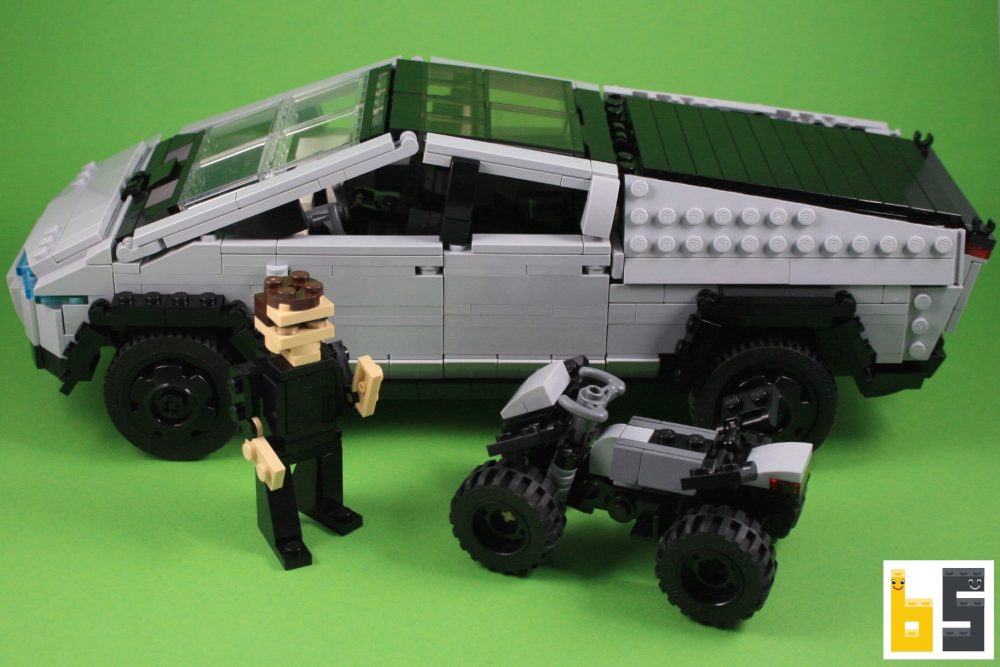 If that one is a bit out of your price range, BrickinNick has a tutorial on how to build an extra-mini Lego Cybertruck out of just 28 pieces.

He also started a “Lego Ideas” project that has reached the threshold required for review by Lego, signifying that Lego will consider whether or not to create an official Cybertruck Lego set.

There’s even some two-wheeled projects happening. YouTuber Casey Neistat was spotted shooting a video on a Cybertruck-inspired e-bike just yesterday in Los Angeles:

Which one is your favorite?  Let us know in the comments below.