IONITY, a European EV charging network owned by BMW, Daimler, Ford, Hyundai, Kia, and VW Group (with Audi and Porsche) has announced that prices will be going up over 500% starting January 31 as they transition to a pay-per-kWh system.

Previously, IONITY charged a flat, fixed rate of €8 for a DCFC charging session. This was a good deal if you showed up with an empty battery and filled most of the way. If you arrived with, say, 10% battery remaining, and added 60 kWh during your charging session, then you’d get away with paying about €0.13 per kWh. For context, in France, electricity costs about €0.19 per kWh at home, and €0.24 per kWh at Tesla Superchargers. In Germany, you pay €0.30 per kWh at home, and €0.33 at Tesla Superchargers in Germany.

Starting next month, however, IONITY will be charging users a whopping €0.79 per kWh. (PDF press release). The Audi e-Tron battery is 95 kWh, so if you “filled it up” with 80 kWh, that’s €63.20 to travel probably about 160 miles, give or take. Terribly expensive. 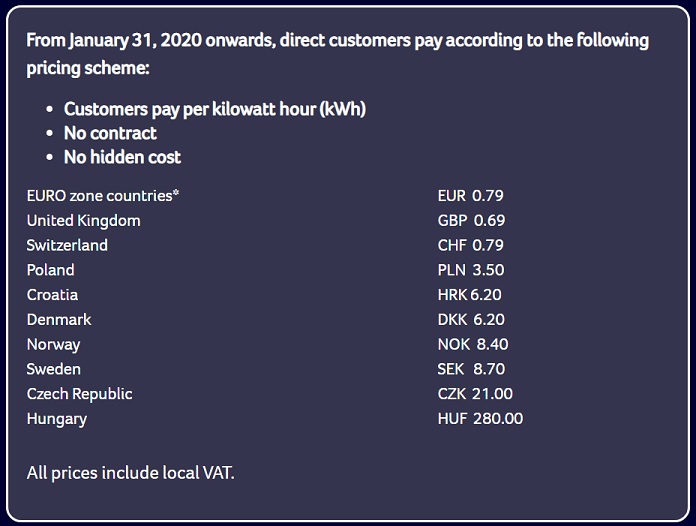 The UK’s Alternative Fuels Infrastructure Regulations: 2017 requires IONITY to offer transparent pricing in this manner for non-subscription users. But IONITY also enters supplier agreements with its car makers, referred to as “Connected Mobility Service Partners” (MSPs). This is a subscription service where you pay monthly to get a discounted price per kWh, and generally agree via terms of use or a privacy policy in an app to allow the vendor to harvest data from you to enable other revenue streams for the vendor. IONITY does not offer a complete list of MSPs or prices you’d pay on its website.

If IONITY’s owners want to make driving electric as unappealing as possible, keep it up. One positive thing we can say at least: Thanks to the UK regulations and the subsequent pricing per kWh, it’s abundantly transparent what a terrible deal it is. Conversely in the United States, Electrify America still hides its terrible pricing behind per-minute billing, although we expect that to change as California’s ban on pricing by the minute comes into effect at DCFC stations in 2023.

The notion of “charging as a service” is, frankly, repulsive. Electricity is a commodity, and it would be nice to be able to procure it without entering an ongoing relationship with yet another subscription service.

Our takeaway on this is that legacy OEMs still don’t get the competition they’re facing from Tesla. It’s not enough to compete with Tesla on vehicle specs. They need to concern themselves with the entire ownership experience. This suggests that they either don’t understand or reject that challenge.