Fresh off the heels of a ban on billing-per-minute for electric vehicle charging, California is turning its sights to a ban of gas-powered lawn devices, according to the San Francisco Chronicle.

According to a tracker maintained by HD Supply, at least 16 California cities and three in Colorado have already banned gas-powered leaf blowers. The District of Columbia joined them, with the ban coming into effect on January 1, 2022. James Fallows, in a must-read essay in the Atlantic titled “Get Off My Lawn: How a small group of activists (our correspondent among them) got leaf blowers banned in the nation’s capital,” describes the filth spewed by these devices:

The great outlier here is a piece of obsolete machinery Americans encounter mainly in lawn-care equipment: the humble “two-stroke engine.” It’s simpler, cheaper, and lighter than the four-stroke engines of most modern cars, and has a better power-to-weight ratio. But it is vastly dirtier and less fuel-efficient, because by design it sloshes together a mixture of gasoline and oil in the combustion chamber and then spews out as much as one-third of that fuel as an unburned aerosol. If you’ve seen a tuk‑tuk, one of the noisy tricycle-style taxis in places such as Bangkok and Jakarta, with purple smoke wafting out of its tailpipe, you’ve seen a two-stroke engine in action.

California, perhaps not wanting to be outdone in the east coast, is looking to ban all gas-powered lawn care equipment. The California Air Resources Board maintains a web page full of statistics and useful information about the harm of these devices, as well as incentive programs for trading in gas-powered lawn care devices in exchange for electric devices. According to the California Air Resources Board, a leaf blower generates as much smog-forming pollution as driving a 2017 Toyota Camry from Los Angeles to Denver: 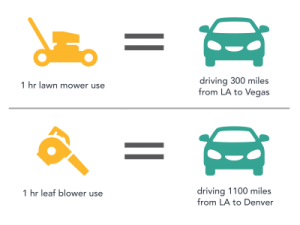 California’s ban would come into effect also for 2022, according to Fallows. He reports in the Atlantic that a study published in Nature Communications found that “VOC emissions (a variety of carbon gases that can produce smog and harm human beings) were on average 124 times higher from an idling two-stroke scooter than from a truck or a car. With respect to benzene, a carcinogenic pollutant, the group found that each cubic meter of exhaust from an idling two-stroke scooter contained 60,000 times the safe level of exposure.” Here is Fallows making the case to Make America Great Again by banning these devices:

Fallows’ own civic activism in successfully banning leaf blowers in the District of Columbia is a model for us all as individuals. As usual, California is leading the nation. Besides advocating with your municipality, if you know of any “direct-action” organizations mobilizing against gas-powered lawn care devices, share in the comments. It’s time to end the use of these devices.