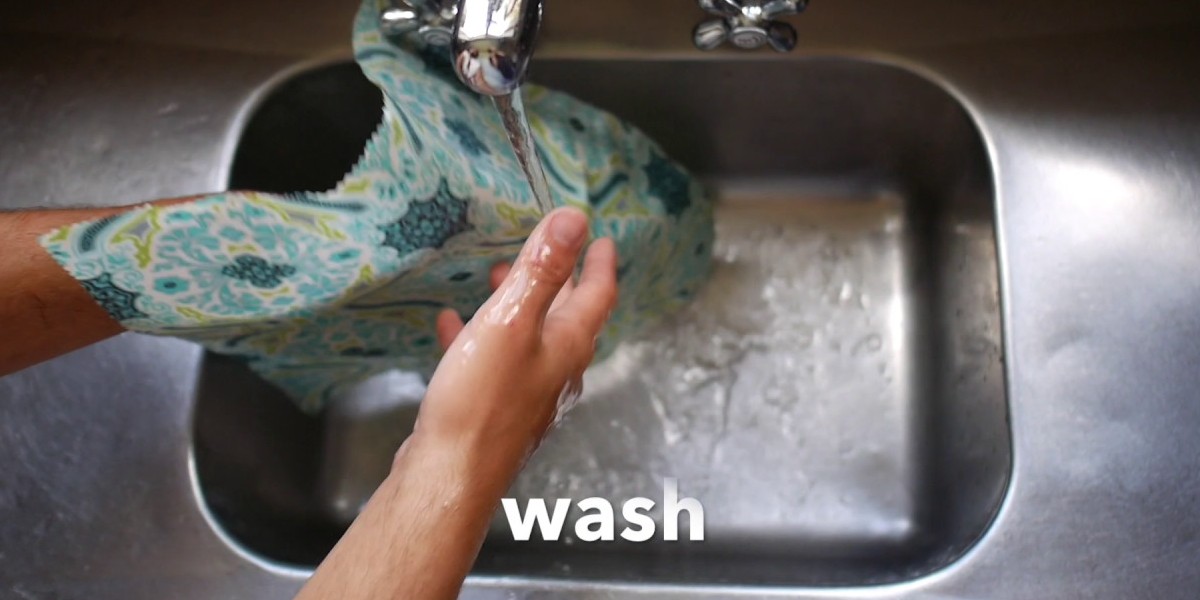 If you’re a procrastinator when it comes to buying holiday gifts (ahem, looking at my feet right now), or if you need to buy a last-minute item for someone who surprised you with a present, then choose something that won’t hurt the environment. Here are five fun ideas for earth-friendly presents:

LilyBee Wrap: Ditch the plastic wrap for leftovers and lunches and try washable, reusable, and biodegradable beeswax wrap (pictured above). It’s made of 100% cotton, with beeswax, tree resin, and organic coconut oil. Check out the video below; it’s pretty cool stuff, and it really does stick well. LilyBee also makes sandwich bags. You’ll save money and cut down on landfill. ($17.91)

Gift cards: This is for when you really procrastinated, but think about it — the person you are buying for can get exactly what they want, and you can avoid wasting money on unwanted presents that get tossed in the garbage. And if you buy them an experience, so much the better. (Or a coffee gift card. Because coffee. With a reusable cup. Thanks.)

Delihom bamboo reusable utensil set: Don’t use single-use plastic flatware when you have a picnic or get take-out. This eco-friendly biodegradable bamboo cutlery set includes a fork, spoon, knife, straw (with a cleaning brush), and chopsticks. It’s dishwasher friendly and comes in a storage bag. ($9.38)

101 Ways to Go Zero Waste: This book by Kathryn Kellogg is “a practical, friendly blueprint of realistic lifestyle changes for anyone who wants to reduce their waste.” Small changes add up. ($14 paperback)

Gift Wrap That Grows: This is a win-win because you can give this flowering seeded gift-wrap kit as the gift itself, or you can wrap another gift in it. It’s made from recycled paper and is embedded with hundreds of wildflower seeds. Just plant the paper 3 to 4 inches in the soil and let nature do its thing. ($14.99)

According to the World Health Organization, more than 264 million people have depression. And new research published in the journal Environmental Health Perspectives suggests that “cutting air pollution around the world to the EU’s legal limit could prevent millions of people becoming depressed,” according to the Guardian.

We know that the finest particulates from dirty air can reach the brain via both the bloodstream and the nose, and that air pollution has been implicated in increased [brain] inflammation, damage to nerve cells and to changes in stress hormone production, which have been linked to poor mental health.

[E]vidence remained limited and more research was needed. In particular, understanding the impact of pollution reduction on mental health would give policymakers further evidence of the benefits of action.

The 2019 United Nations Framework Convention on Climate Change (COP25) concluded on Friday, December 13, as we wrote in last week’s Climate Crisis Weekly, and we gave a summary of the outcome. Electrek‘s thoughts: Some progress, but not nearly enough, because the big polluters are dragging their heels.

But what did others think about the outcome of the summit?

Here’s a short roundup of direct quotes, taken from both the BBC and Twitter:

I am disappointed with the results of COP25. The international community lost an important opportunity to show increased ambition on mitigation, adaptation, and finance to tackle the climate crisis. —António Guterres, United Nations secretary-general

Major players who needed to deliver in Madrid did not live up to expectations but thanks to a progressive alliance of small island states, European, African, and Latin American countries, we obtained the best possible outcome, against the will of big polluters. —Laurence Tubiana, Paris Agreement architect

CEO of @Unilever + CEO of #IKEA + @DSM + @iberdrola
+ #business groups representing 1000s of companies: “The text on the table at #COP25Madrid is not strong enough. Match the ambition of the private sector” @wmbtweets @wbcsd @ClimateGroup @thebteamhq @ClimateCLG @CeresNews @CDP

Colleagues and parties who are calling for more ambition, who are saying that environmental integrity is the core, that are calling for the climate emergency, if you are not in line with a discussion on climate finance… please relook at your positions. We are not here to have very nice statements and people start applauding and clapping for nice words. We are here to work and make sure that we deliver the right package, to enhance the ambition and move forward. —Mohamed Nasr, Egyptian delegate speaking on behalf of African countries

As #COP25Madrid was a big (pardon our words) gigantic cluster fuck-up, its shows that we have to force our governments to see #ClimateChange as the #ClimateEmergency that it is. It's time for more massive #action We have to #block more streets & #Infrastructures #ClimateCrisis pic.twitter.com/QV2ZgjSG0n

We are tired of governments siding with the polluters. We are tired of our lives being negotiated away for money. The people are tired of being ignored while a handful of wreckers and bullies negotiate in bad faith. We know that until we get them out of power they will continue to sabotage our future. —Adam Currie, youth climate organization Generation Zero 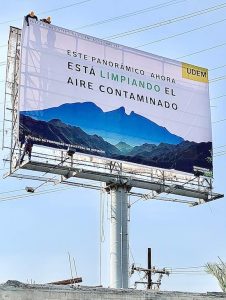 Billboards. They’re kind of an eyesore, yet mildly entertaining on a long, boring road trip. Who would have thought that they’d be capable of reducing emissions?

Dutch designer Daan Roosegaarde worked with the University of Monterrey in Mexico to create billboards that are “coated with a specialized resin that attracts nearby air pollutants and converts them into oxygen when exposed to direct sunlight.”

The billboard generates the equivalent of clean air as 30 trees every six hours and has a lifespan of up to five years. This is a huge help for Monterrey, which is in a valley and doesn’t have a lot of greenery.

Says Roosegaarde: “True beauty is not a Louis Vuitton bag or a Ferrari, but clean air and clean energy.”

The GivePower Foundation created a desalination system in Kiunga, Kenya, that produces enough clean water for 35,000 people every day. The region suffered from drought for five years, and the residents had to resort to using saltwater and dirty well water, and that made them sick.

Watch the video below to see what a difference it’s made in the residents’ lives. I think the smile on the man’s face below says it all. 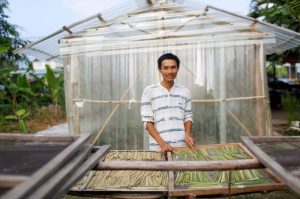 Vietnam is the world’s fourth-largest creator of marine plastic pollution, according to a 2015 study by the University of Georgia. So a Vietnamese entrepreneur created reusable, biodegradable straws out of wild gray sedge grass stems.

Tran Minh Tien runs his company, 3T, from a village in the Mekong River Delta, where the wild gray sedge grass grows in swamps.

In a labor-intensive operation, hired hands work with Tien to pick the grass, cut it into uniform lengths, and then clean straws before baking them in an oven or setting them out to dry in the sun for two or three days.

The company now produces about 3,000 straws a day, making a profit of $400 a month. The straws can be used for up to six months.

Right from the start, I formed this idea around the fact that the harvesting can never exceed the grasses’ natural reproduction rate.

Nature has to have enough time to recover as well. 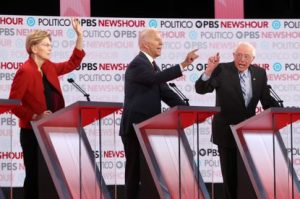 Unlike some of her rivals, Warren’s climate plan encompasses more than half a dozen individual proposals, including the first in the 2020 race to outline a comprehensive overhaul of coastal economies and the seafood industry. But in the latest plan released Friday morning, the senator detailed plans to expand public transit and establish a green bank to fund clean infrastructure. In total, she said her plans would generate $10.7 trillion in combined public and private investment.

In contrast, Senator Bernie Sanders (I-VT) has proposed spending $16.3 trillion in direct federal funding on a Green New Deal that could, by some estimates, create 20 million jobs.

The biggest climate problem we face is the politicians in Washington who keep saying the right things but still take money from the oil industry — who continue to bow down to the lobbyists, lawyers, think tanks, the bought-and-paid-for ‘experts.’

The actor and fellow activists demonstrated on the Capitol building’s southeast lawn about pollution as a health emergency (which it is).

Fonda was joined by writer and activist Gloria Steinem, actor and comedian Casey Wilson, and actors Rosanna Arquette and Matt McGorry, among many others. Nothing like getting arrested for standing up for what you believe in to celebrate your 82nd birthday, Jane! Happy birthday!

Our focus is on health and we are demanding urgent and transformational action to reduce greenhouse gas emissions and support the health and safety of all our communities, and our global neighbors. pic.twitter.com/CgGWe1k5cD

Meanwhile, Fridays for Future activists — including Greta Thunberg, who is back home in Stockholm — were busy protesting pollution and climate change around the world. Here’s a sample: