The 2019 United Nations Framework Convention on Climate Change (COP25) kicked off in Madrid on December 2. Delegates from across the globe worked to come up with a concrete plan to implement the Paris Agreement. It concluded on Friday, December 13. Carbon credits were a big focus of the summit. Quartz explains what that is:

Carbon credits could allow a polluting country far from a tropical forest (say, Norway) to close the gap in their climate goals by paying to preserve forests in a place like the Amazon basin.

So what happened? The Guardian reports:

Negotiators finally managed over [last] weekend to put out a text on the future of carbon markets. It is only a first step, and there are still major disagreements over how carbon credits should be counted and how countries’ success in meeting previous carbon targets should be allowed to count toward their future targets.

There is still no guarantee of any resolution to the disputes over carbon markets.

If this is not resolved, this will impede the fact that by next year, countries are supposed to realign their emissions-cutting targets of staying within 2C (and hopefully 1.5C) of global heating above pre-industrial levels.

Countries have until November — the date of the next major climate talks by the UN Framework Convention on Climate Change, scheduled for Glasgow, Scotland — to announce how they will make even deeper cuts to climate pollutants than they promised in 2015 in the lead-up to the Paris Agreement.

After that, countries are required to revisit and strengthen their carbon cuts every five years.

Further, young people played a large role last weekend, with a big march on Friday, and on Monday, they put pressure on negotiators at the conference to come up with a definitive plan for reducing emissions and addressing climate breakdown.

According to Climate Home News, also on Wednesday:

COP25 president Carolina Schmidt announced that 73 small and developing countries had signaled their intention to enhance their climate plans, and 72 countries working to achieve net zero emissions by 2050 joined a high ambition coalition launched in New York in September.

Meanwhile China, India, Brazil, and Saudi Arabia have made no indications of their willingness to enhance their ambition. The US is leaving the Paris Agreement. Australia is on the record saying it will not change its goal.

Russia also made no moves to further cut carbon.

Oh, and Japan was given two satirical Fossil of the Day awards by NGO Climate Action Network for refusing to phase out coal.

Swedish climate activist Greta Thunberg has been named as TIME magazine’s 2019 Person of the Year. Every year, TIME names the person who the magazine considers “for better or for worse… has done the most to influence the events of the year.”

Thunberg, 16, is the youngest person to ever be named TIME’s Person of the Year.

TIME editor-in-chief Edward Felsenthal explained why the magazine chose the young climate activist on the Today show on Wednesday:

She became the biggest voice on the biggest issue facing the planet this year… coming from essentially nowhere to lead a worldwide movement. And she also represents a broader generational shift in the culture that we’re seeing from the campuses of Hong Kong, the protests in Chile, to Parkland, Florida, where the students marched against gun violence. Young people are demanding change, and urgently. She embodies youth activism.

Her rise in influence has really been extraordinary. She was a solo protester with a hand-painted sign 14 months ago. She has now led millions of people around the world — 150 countries — to act on behalf of the planet. She’s taken this issue… from backstage to center. 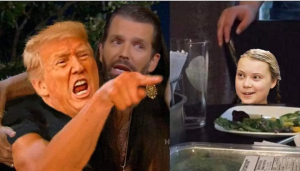 TIME’s choice of Thunberg has brought out rancor on social media, in addition to praise. (I have personally seen some incredibly hateful, profanity-filled comments from adult men about a girl who wants to fight pollution and protect the environment.)

For those of you who have a problem with Greta Thunberg’s message, mere existence — or just the “power of youth” in general — this article might be worth a read by Robert Shrimsley at the Financial Times: “Why Middle Aged Men Hate Greta Thunberg.” (Donald Trump ought to read it, too.)

Dr. J. Marshall Shepherd is a leading international expert in weather and climate. Shepherd was president of the American Meteorological Society in 2013 and is director of the University of Georgia’s Atmospheric Sciences Program. He published a piece for Forbes on December 11 about NOAA’s Arctic Report Card 2019, which was released this week.

He then asked, What does this have to do with those people who don’t live in the Arctic — and frankly, not many of us do? He gave three answers:

So, in short, it affects everyone — a lot.

If you click on the link above, you can access an interactive map on their page that gives you spending and staffing data for each state. Here’s what they found out overall:

And yet good environmental programs have never been more needed.

The European Commission (EC) released a new climate change action plan on Wednesday known as the European Green Deal, with the subtitle, “striving to be the first climate-neutral continent.” The plan aims to make the European Union “climate neutral” by 2050.

However, the plan does recommend a carbon tax that would apply to emissions associated with imports from countries with weaker climate policies.

ABB FIA Formula E champion Lucas Di Grassi is a UN climate ambassador and electric mobility entrepreneur. He traveled to New Delhi, India, to learn more about the fight against air pollution. He then made a documentary about his experiences there, which Formula E debuted on Thursday.

Di Grassi took on the role of UN ambassador for clean air in 2018. At the time, the Brazilian racer said, “For me, it’s a lifetime achievement to be a part of the UN Environment Programme.”

Di Grassi’s 26-minute documentary is called The Race for Clean Air. You can watch the entire film below:

In this week’s Fire Drill Friday, Jane Fonda was joined by Oscar-winning actor Sally Field. Field is speaking in the video below, and she was later arrested at the US Capitol building.

This is a possibility that is actually happening, we need to get out of our comfort zones now! – @sally_field #firedrillfriday pic.twitter.com/1qNEfRfn12

This week’s protest was about how “jobs, communities, & just transitions can’t wait”:

The climate emergency requires us to rapidly transform our energy system and key industrial sectors in many ways — and it is up to all of us to ensure this is done in a way that benefits workers and communities. If we do this right, transforming our energy systems and industrial base can and will create millions of good union jobs that provide a living wage, full benefits, a safe workplace, and the right to collective bargaining.

The Green New Deal is a resolution focusing on l…