Tesla gets kudos from VW for car of the year award in ad, challenges them with ID.3

Tesla won the car of the year award in Switzerland. VW surprisingly paid for an ad to congratulate Tesla — and in the ad, challenges Tesla with the VW ID.3 as competition for next year.

A 12-member jury awarded the coveted title of “Swiss Car of the Year 2020” to the Tesla Model 3 earlier this month.

In the same competition, the Model 3 also won “The favorite car of the Swiss” and “The greenest car in Switzerland.”

VW didn’t have a runner up, but the Volkswagen group had the Audi e-tron come in second in “The favorite car of the Swiss” category. The Bentley Continental GT Cabriolet and Porsche Cayenne Turbo Coupe came in first and second, respectively, for “The most stylish car in Switzerland” category.

With three No. 1 spots, Tesla was seen as the winner of the whole competition.

Interestingly, Volkswagen acknowledged that in an ad published in Schweizer’s Illustrierte and L’Illustré magazines: 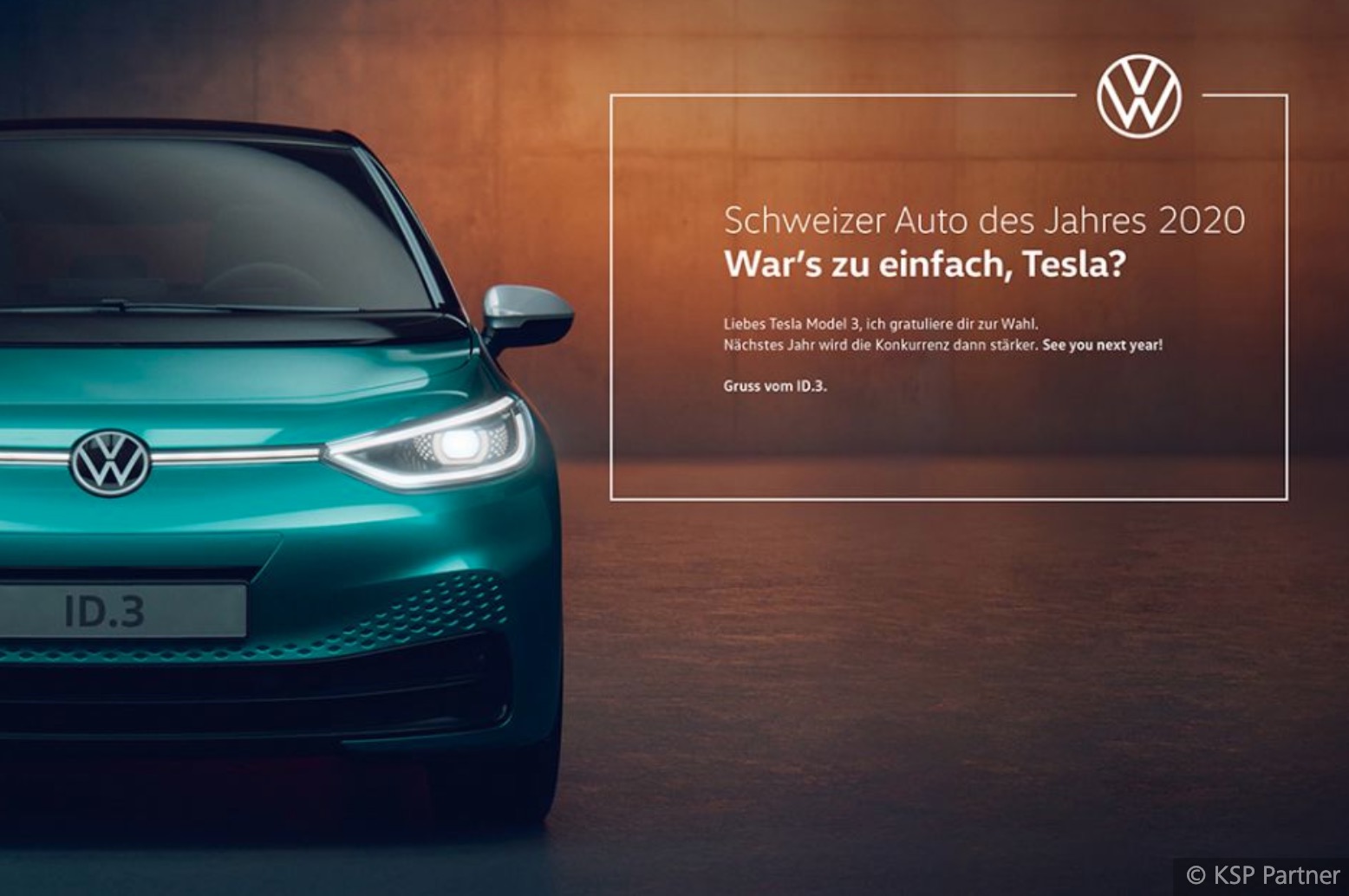 The message in the German ad roughly translates to this (via Google Translate):

Dear Tesla Model 3, I congratulate you on winning. Next year’s competition will be stronger. See you next year.

Greetings from the ID.3

In short, VW congratulates Tesla, but the German automaker also issues a challenge for next year — indicating that the ID.3 will represent tough competition for the Model 3.

The VW ID.3 wasn’t eligible for any of the awards since it’s not on the road yet.

The German automaker unveiled the ID.3, a small electric hatchback, in September this year.

Earlier this month, VW started production of their ID.3 electric car at its Zwickau factory, which they are converting from gasoline-powered car production to EV production.

However, VW said that deliveries of the ID.3 won’t start until summer 2020. The automaker says that it is accumulating volume until the launch, which is expected to happen in markets across Europe.

Tesla’s impact is truly impressive if a major competitor like VW is willing to run an ad to remind people that they have a car coming to compete with them.

And to be fair, I do think that the ID.3 will be a great car, especially for the European market.

Whether the ID.3 will win the car of the year award next year against the Model 3 isn’t really important.

What is important is that it should have a great impact on EV adoption in Europe.