Radioactive spill in the Detroit River 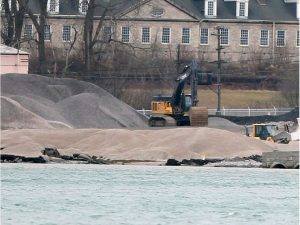 The former Revere Copper Plant, now leased by Detroit Bulk Storage, collapsed into the Detroit River (pictured above) on the American side on November 26, the Michigan Department of Environment, Great Lakes and Energy (EGLE) has confirmed.

(I can’t find a press release or statement about this incident anywhere on EGLE’s site; if anyone sees it, please send me a note.)

According to the Detroit Free Press:

The site known as the Detroit Dock allegedly collapsed under the weight of large aggregate piles that were stored at the site during Thanksgiving weekend.

Due to the timing of the collapse, the spill went unnoticed to many responsible state and federal environmental regulatory agencies. Environmental Protection Agency officials were not aware of the collapse until contacted by the Windsor Star on Wednesday.

The Windsor Star’s story about the spill is dated Thursday December 5.

The site contains nuclear materials because during the Manhattan Project, the plant was used to help construct the atomic bomb. After World War II, uranium rods were constructed there. It is rated high for residual contamination.

Canadian member of parliament Brian Masse believes the incident should be investigated by the International Joint Commission and the US and Canadian governments. Masse said:

An immediate study should be conducted on the dangers presented to the Detroit waterways and Great Lakes region. Forty million people use the Great Lakes for drinking water, and the ecosystem is already fragile. Any potential threat should be investigated immediately on both sides of the border.

Renewable Independent Power Producers has officially opened a 1.2-megawatt solar facility near Willow, Alaska, which is north of Anchorage. It is the state’s largest solar farm and is expected to come online this month.

The solar farm took two years to build and has more than 3,000 panels. “The farm will sell its energy to the Matanuska Electric Association at wholesale cost,” according to KTVA.

The farm is expected to produce enough energy for 200 homes and offset 2 million pounds of carbon dioxide annually. (For perspective, in 2019, the estimated population of Alaska is 735,720.)

According to the Associated Press, “The Alaska Energy Authority’s Power Project Fund loan program provided about half of the project’s $1.5 million funding, while the rest came from private capital.”

The Wyoming Industrial Siting Council has approved a 277-turbine wind farm on the border of Albany and Carbon counties, according to the Associated Press. (Yes, I think it’s amusing that a wind farm is going into a county called Carbon.)

The developer, Canada-headquartered BluEarth Renewables, is required to prioritize locals for jobs, and also provide bonding of $33.1 million for decommissioning and reclamation.

The project is expected to employ 400 workers during peak construction in 2022. Construction is estimated to cost around $1 billion. It will take about 19 months to build the wind farm.

Australia’s ABC reports that of the country’s more than 9 million homes:

The majority rate below three stars for energy efficiency under the Nationwide House Energy Rating System (NatHERS). NatHERS data is not the most comprehensive but it does show that the energy performance of older Australian homes is well below that of newer properties.

A zero-star rating means the ‘building shell does practically nothing to reduce the discomfort of hot or cold weather” while 10 stars indicate the “home may not need any artificial cooling or heating to keep you comfortable.’

Those residents who suffer the most as a result of a poor NathHERS rating are renters — landlords simply don’t see the benefits. Rental properties are less likely to have insulation, window treatments, and solar panels.

In Australia, the mean summer temperature was the highest on record by almost a degree this year.