At a time when many e-bikes are starting to look like cookie-cutter copies of each other, the new Super Monarch electric bicycle has gone a different direction. And that new direction includes adding an extra motor, an extra battery, ratcheting up the speed, and then tossing in full suspension on top.

The result is a fast and powerful e-bike with plenty of range that can provide as much fun off-road as it can on-road.

The Super Monarch electric bicycle from E-Cells launched today and is available in two formats.

The entry-level model sports dual 350W hub motors, while the higher-powered model opts for dual 500W hub motors. Whether you want 700W or 1,000W of power is up to you.

You’ll find out more about the entire experience below, but first check out the video of my test ride to see this epic e-bike in action. What sets it apart?

But the Super Monarch stands apart in a number of ways.

First of all, there are some pretty nice components on this bike. Not everything is top-end, mind you. But the important stuff is. 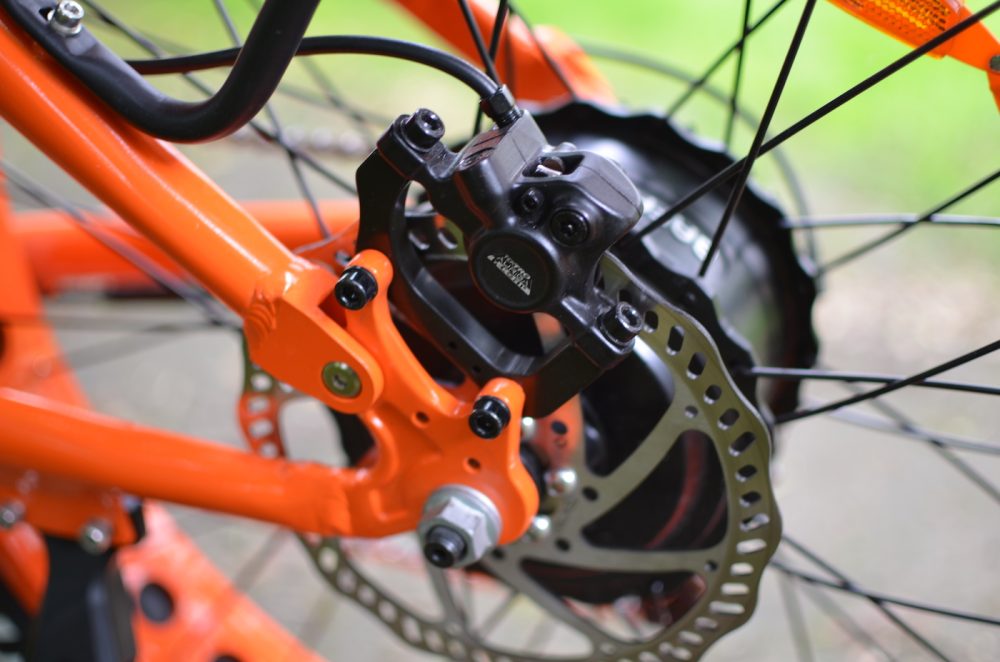 The Auriga brakes from Tektro are on the higher end of the quality spectrum and offer excellent braking with just a light two-finger pull. The giant front 203 mm rotor gives you more stopping power and also keeps the disc from heating up as much. The rear doesn’t support as much of the braking force (which is true on any bike), but it still gets a large 180 mm rotor for good measure.

The Deore shifter set is also near the top of the line for Shimano parts and will give quicker, more precise shifts without needing the constant adjustment that cheaper shift sets require. Plus they should stand up to a lot more off-road abuse. 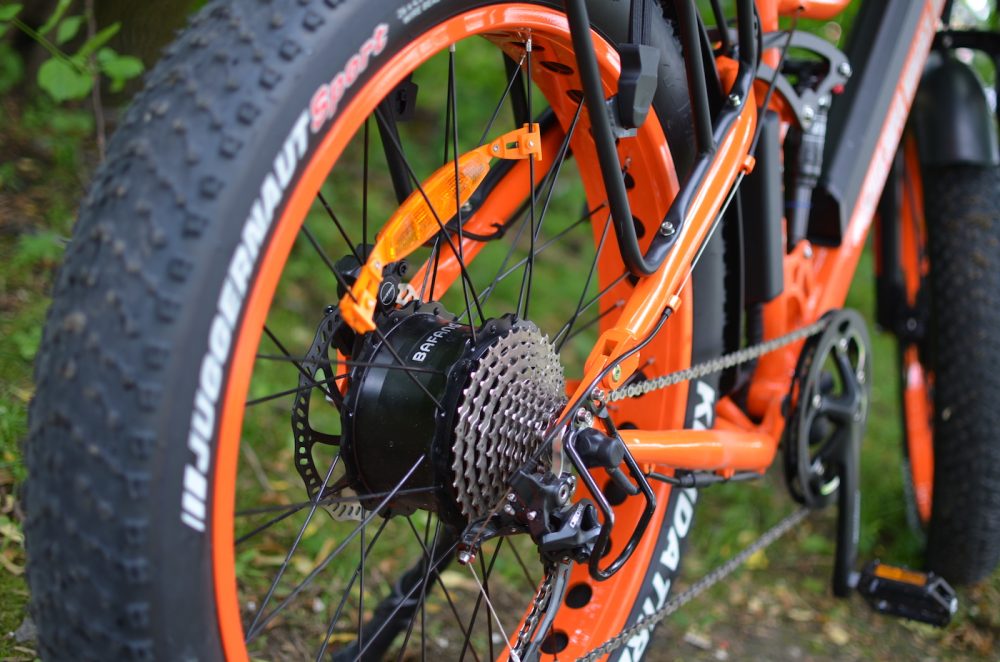 The batteries use genuine Samsung 35E cells, which are Samsung’s highest capacity 18650 format cells. Each of the two battery packs are also of relatively high capacity by themselves (672 Wh and 840 Wh) and thus should be more than adequate to provide power to the dual motors.

Then you’ve got a pile of what I would call “smart choices” when it comes to components that are good enough, but don’t force the price of the Super Monarch to skyrocket. Components like the Kenda K-Shield tires, reasonable but not over-the-top DNM suspension, and the Promax adjustable stem. Again, decent parts that don’t cost a fortune. That’s a $25 adjustable stem, and there are others out there that are nicer, but this one sure beats a $10 non-adjustable stem that you’ll find on most bikes, and it feels like a Goldilocks solution of being “just right.”

Sure, I would have loved to see some high end RockShox or Fox suspension components, but that would have easily added another few hundred dollars to the price and would have made many people flinch. And yes, the suspension geometry is rather basic compared to some other higher-end full suspension e-bikes. But again, we aren’t talking about a competition-level bike here. We’re talking about something you can rip around on for fun, go places you can’t go on cheap budget bikes, and all for a price that won’t make you cry.

The Super Monarch AWD e-bike rides pretty awesome. You can select between single and dual motor drive modes, though I usually kept it in dual motor (AWD) mode. It’s especially useful for off-road riding. If you’re doing a lot of bike lane commuting, you can probably get by with single motor mode much of the time to increase your range.

I was on a preproduction prototype, so there were a few wonky things. The front fender was difficult to keep in its place without touching the massive knobby tire, and the connector for the front motor was a bit short and would sometimes disconnect, but both of those issues were addressed on the production version now shipping. 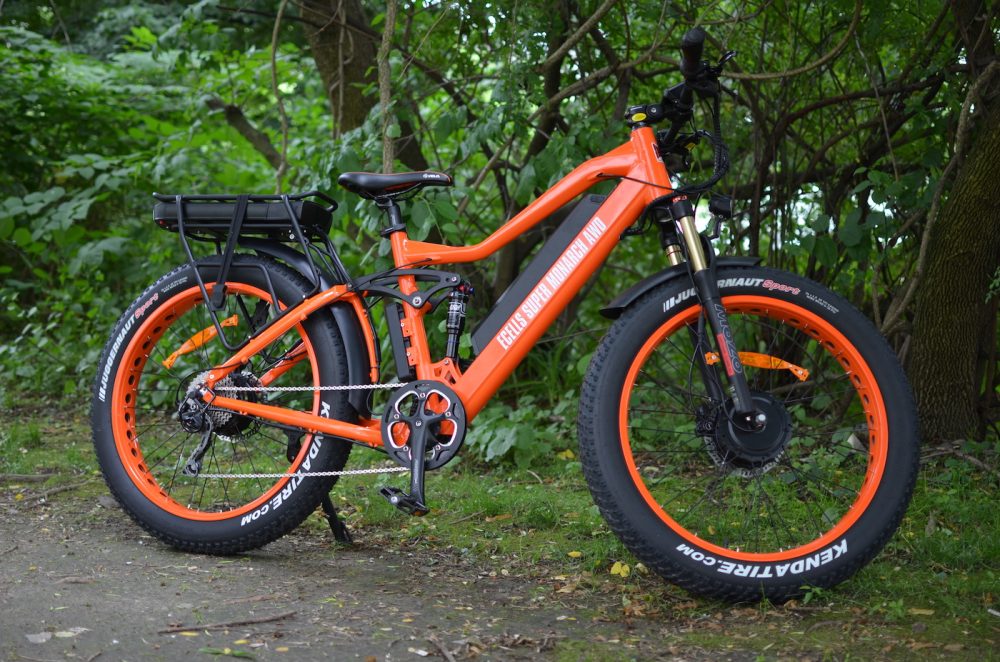 The best indication I can give of this bike is just how fun it is to tear through loose gravel and dirt, or up and over obstacles. With dual motors you get twice the propulsion, which is super helpful in soft terrain. It also helps you rip around corners, though you have to be careful not to overdo it since you can break the front wheel free easier than normal, thanks to it housing an extra 500W of power.

I also find that the mix of front and rear drive on the Super Monarch helps tackle diverse situations. Front wheel drive is great for climbing obstacles. Without it, rear wheel drive just mashes your front tire into the obstacle and hopefully it pops up. But with front wheel drive, the front tire actually climbs over obstacles such as roots, tree trunks, and rocks. And when terrain gets slippery, rear wheel drive can have the effect of pushing you along while your front tire just skids about, searching for direction. But with front wheel drive, it actually pulls you in the direction you’re turning, helping you get out of a mud hole or through any icy patch.

At the same time though, most people don’t want to give up rear wheel drive since it offers better traction and more natural ride characteristics. So with AWD, something we rarely see on e-bikes, you get the best of both worlds!

And the dual battery feature on the Super Monarch is great for those that actually want to cover some serious off-road terrain. It’s rare that you’d need this much battery on the street, but on trails you’ll find yourself chewing through battery quicker. So dual batteries offer more to feed those dual motors and helps offer better range. 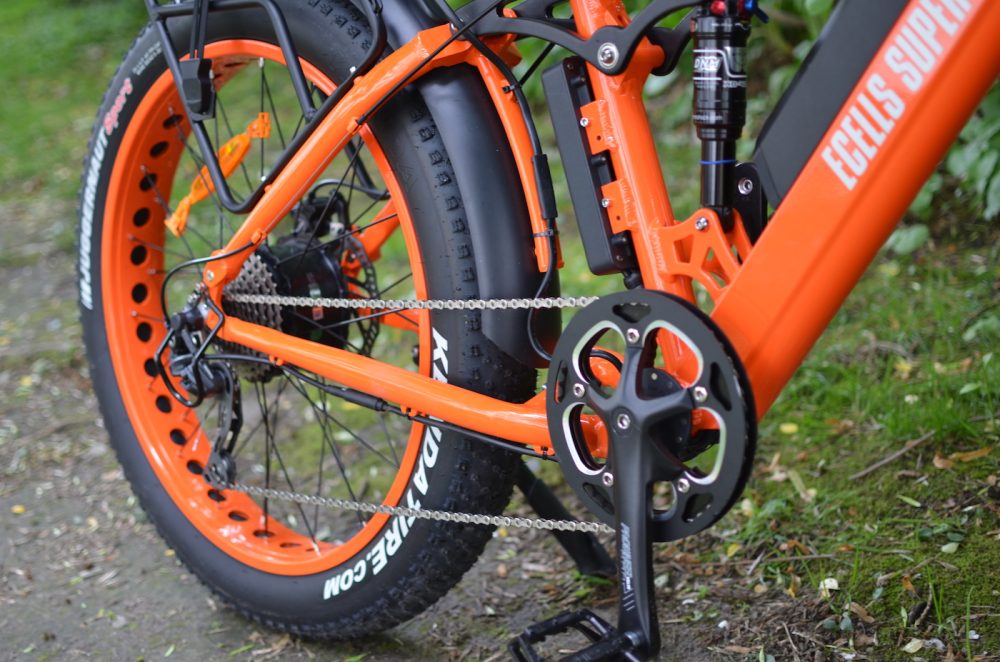 Some people are going to ask the obvious, which is, “Why do you even need two motors?”

And that’s a fair question. I addressed this partially in the best-of-both-worlds bit above, about getting the advantages of both front and rear wheel drive at the same time.

But another big advantage is stealth. I’ve ridden big 1,000W hub motor bikes, and while they’re fun, too, that giant hub motor is a dead giveaway that you’re on a powerful (and maybe illegal) e-bike.

On the other hand, these smaller geared motors practically disappear, giving you a much stealthier ride.

That has come in handy for me many times. For example, where I live in Tel Aviv, we have very strict 250W e-bike laws, and the police know to look for those big, black 1,000W rear hub motors that are common on high-power e-bikes. So instead of opting for a big motor to get the power I desired, a few years ago, I built myself a 1,000W e-bike using two small 500W hub motors that both disappeared behind the disc brake rotors and left me with a bike that barely looked electric at all.

I’m not saying you should ride in areas where a bike of the Super Monarch’s power level isn’t allowed. I’m just saying, you probably could. And if you’re worried about 1,000W being over your local limit, then there’s always the 700W version with dual 350W motors. 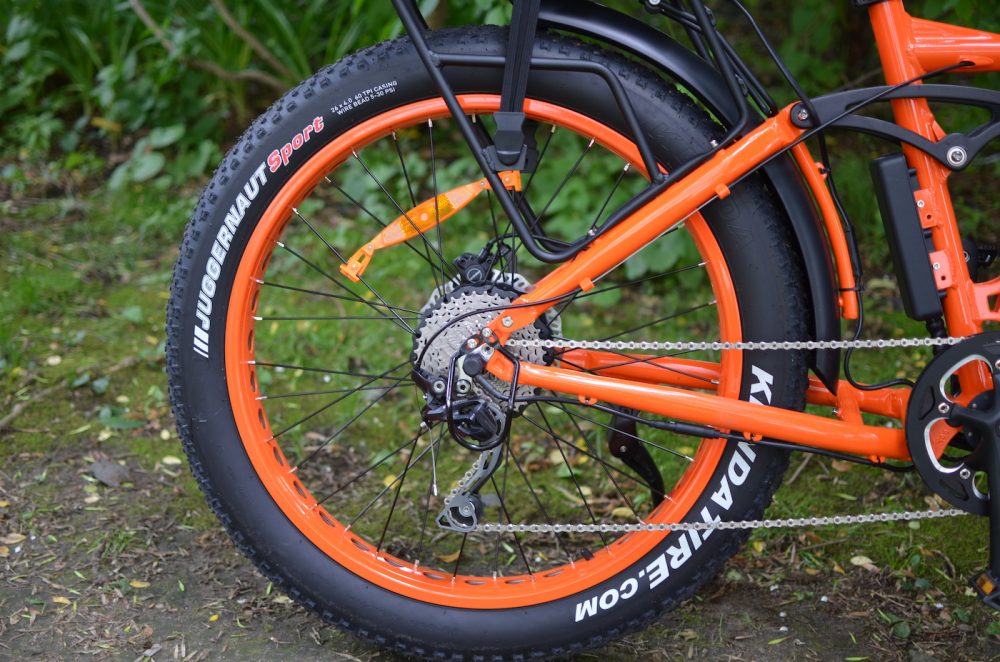 There’s also the redundancy factor here. No one ever expects to have a problem with their e-bike until they do. If you’ve got one motor and it goes out, you’re walking or pedaling home — which could be a pretty long distance or uphill from your present location. But if you’ve got a second motor, then it’s smooth sailing all the way home, where you can then check your connections and search for the problem at your leisure.

Now, sure, there are some tradeoffs here. Namely weight. That extra motor and battery are going to add somewhere around 7 kg (15 lb) of weight to the bike. And for those that focus on shaving every gram off their bike that they can, that might sound scary. And at a total vehicle weight of 41 kg (92 lb), this is one hefty e-bike, though not the heaviest e-bike I’ve ridden. Sure, you can drop about 9 kg (20 lb) off the bike by removing the batteries, which can be helpful if you want to lift the bike up into a van or truck. Yet it’s still a heavy e-bike, any way you slice it.

But one of the biggest benefits of e-bikes to me is that the weight penalty isn’t as severe, at least when you’re riding. Of course if you were pedaling an extra 15 pounds of weight, that’d be pretty annoying. But with pedal assist or even throttle control, most people don’t notice the extra weight until it comes to technical maneuvers like jumps and other stunts.

So all in all, I had a blast riding the prototype version of the Super Monarch. And now that I’ve seen the production version and how the few complaints I had were addressed, I can definitely give this e-bike two thumbs up. It’s a fast, thrilling ride that will take you to unexplored trails and summits that have been waiting for you.