CoMotion LA Micromobility event vehicle roundup: fun ways to get around the city

We had the pleasure of attending CoMotion LA: a fantastic event for transportation innovators, delegates, municipalities, vendors, and lawmakers to all connect and collaborate.

With conferences and meetings occurring at every hour, we were on the exhibition floor to bring you the new, the exciting, the quirky, and the bold new vehicles coming to a neighborhood near you.

CoMotion LA “brings together the brave new world of the urban mobility revolution — a revolution that is set to transform every city in the world, large and small.”

The event was held at the ROW DTLA with the backdrop of the LA Auto Show, and there were quite a few interesting companies showing off their new products. CoMotion flew me out to Los Angeles and paid for my stay. 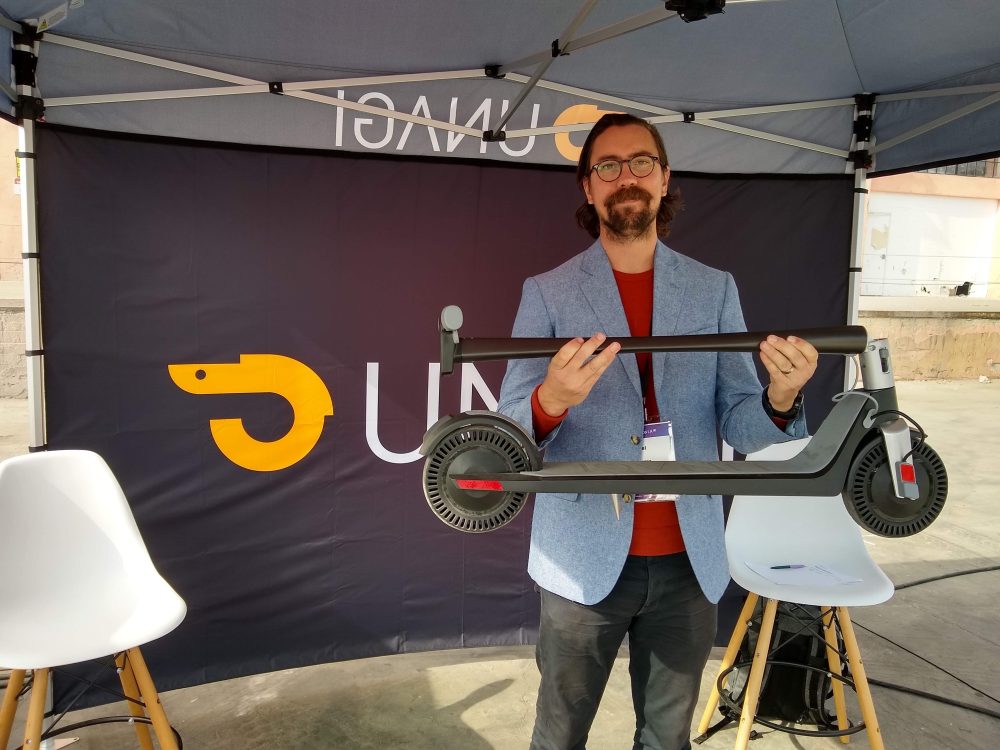 Kicking it off is one of the few scooters that’s consumer ready: the Unagi – a scooter that we reviewed last year. It’s one of the lightest, full-sized electric kick-scooters I’ve tried: 24.25 lb. Carbon Fiber and Magnesium accents on an aluminum frame, dual motors, and a healthy 32 v 9.6 ah battery. Dual motors made it pretty peppy for such a small guy. I found the brakes to be really strong, almost overpowered. With some practice, they could be a useful ally. It’s priced at $990. Check out our review below: 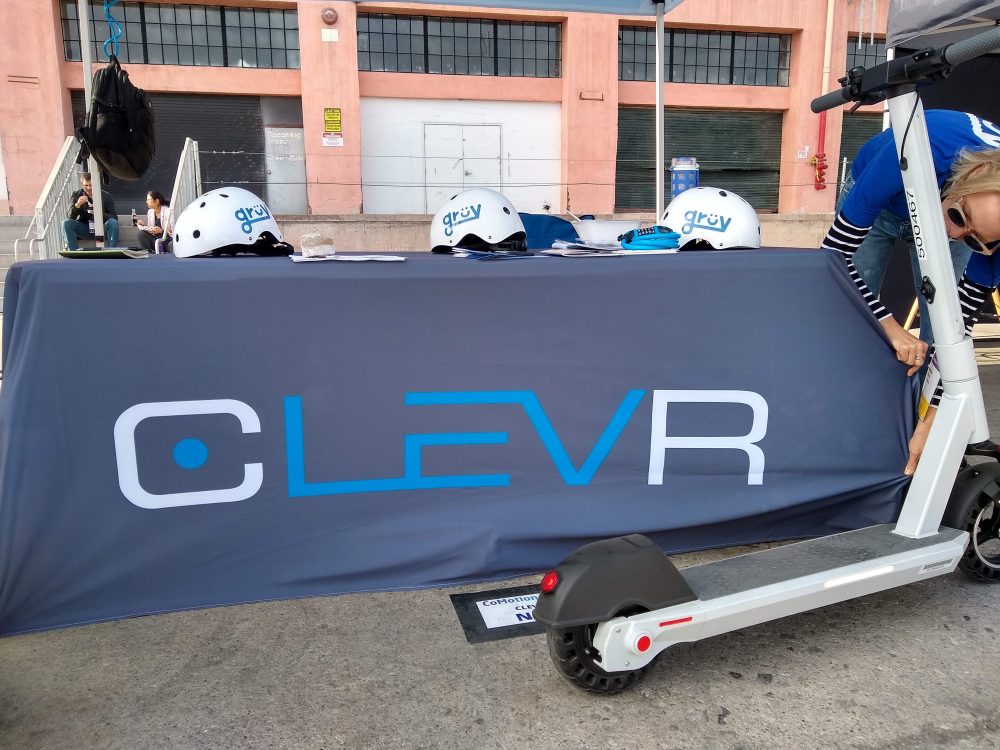 Next up is an interesting case, the Grüv. As a scooter, it’s perfectly fine, but the Grüv is actually just a showcase for a broader rideshare platform from Clevr Mobility. They say their GPS and targeting is so refined that it can pinpoint within 3 feet, instead of up to 100 feet for competitors. With this tech, they have used this precision to cap speeds on sidewalks and no-ride zones, ensuring better integration with the walking public. 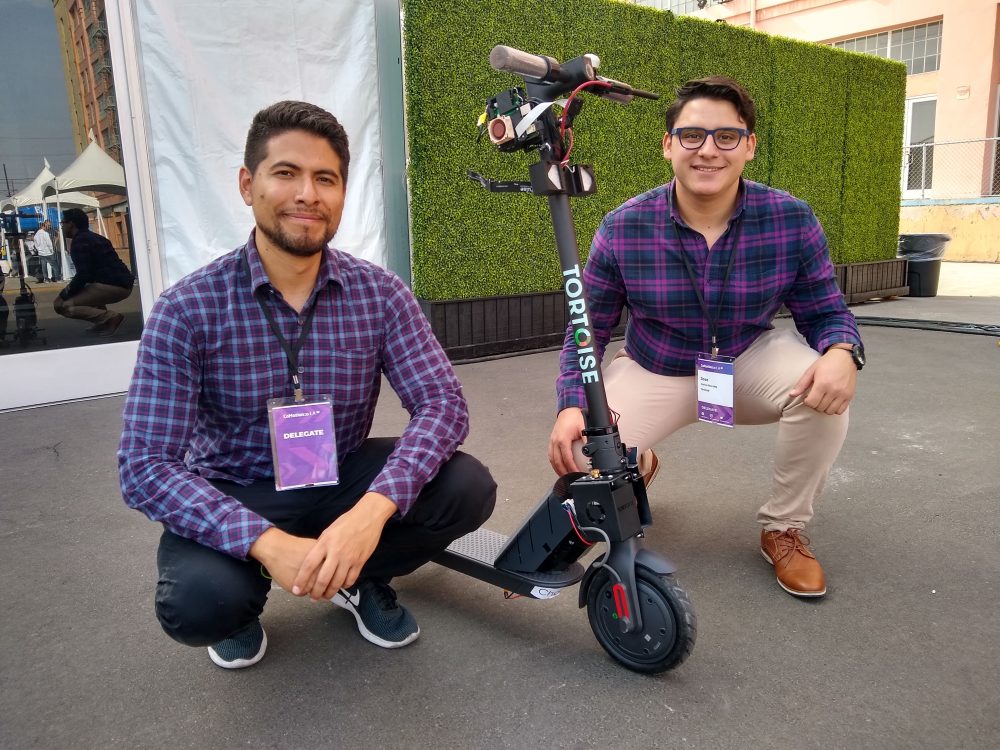 Tortoise, the race for autonomy

Tortoise is developing a self-driving scooter with the intent of programming the unit to return for charging on its own. To me, it seems like a simple application for very impressive tech, but the staff reminds me that a large part of operating costs for rideshare companies is paying humans to operate trucks to corral and recharge across an entire city. Unfortunately, we’re a bit out from this kind of tech: The prototype unit could not ride alone, but was controlled remotely (from Mexico City). 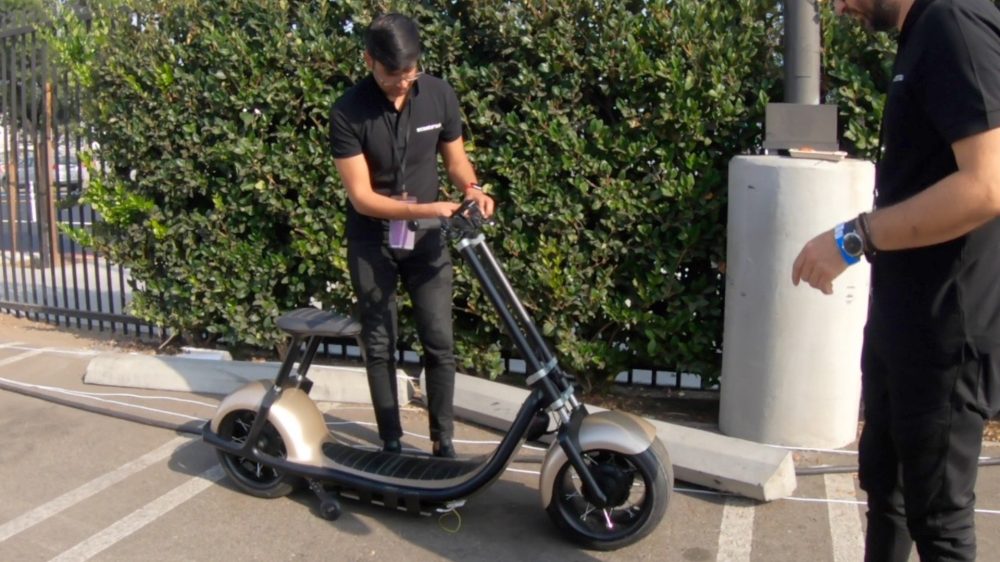 It looks like a scooter, feels like a scooter, and can do scooter things, but the team at Scooterson want you to believe it’s much more. They’ve developed custom tires that help it sit upright without a kickstand, and a totally custom frame that gives a “desk-like” seating position. One of the goals with Scooterson is to develop a vehicle that can be driven by folks who can’t ride a bicycle. Also developing self-driving tech (and also controlled remotely as a prototype), Scooterson wants to take it a big step forward and allow the vehicle to carry passengers autonomously. 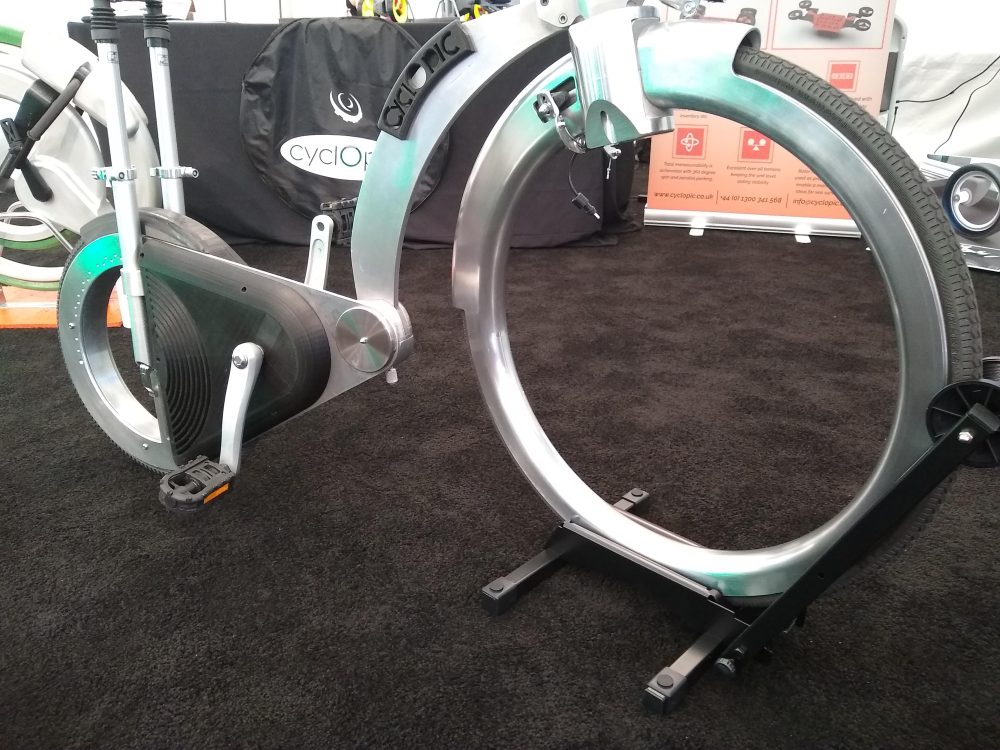 Cycloptic, eye see what you did there

Moving into bicycles, the Cycloptic is a non-demo prototype bicycle without a hub, or spokes, or anything in the middle of the wheel. The front “centerless wheel” is driven by a gear along the inner rim that’s connected to an external gear close to the headset. It’s not certain what the empty space will do for rigidity, stability, or cornering, but I do believe the drive system can operate, and do so effectively. I’ve had the chance to ride a different vehicle with a similar drive system: the YikeBike. However, YikeBike occupied the center of the wheel with batteries, a motor, and so forth. 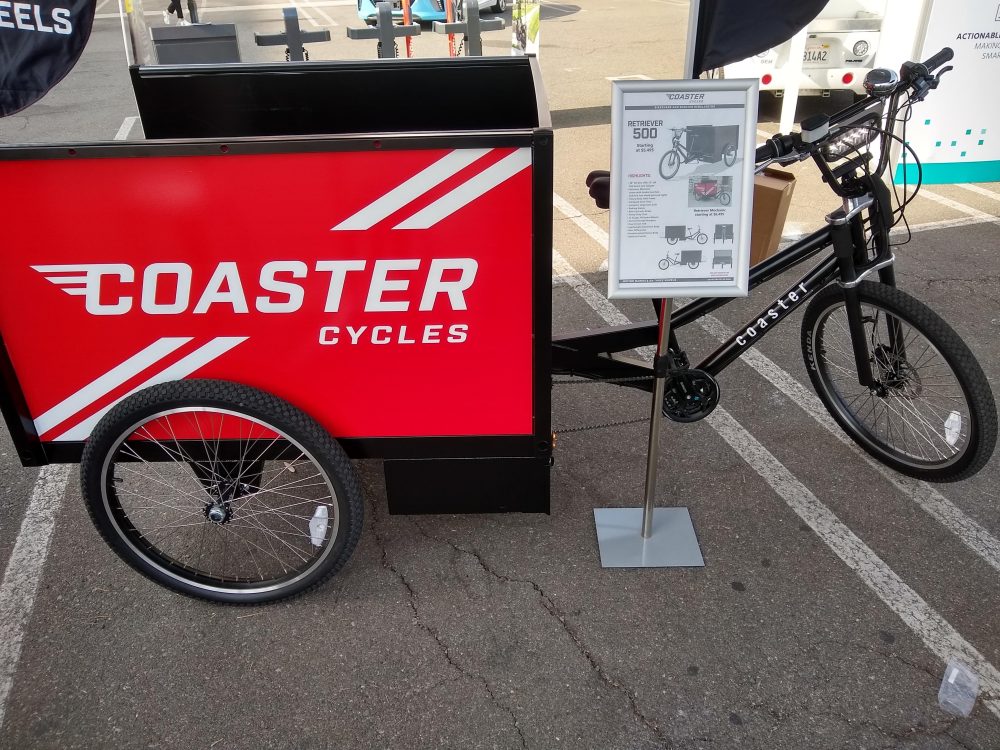 Coaster Cycles has developed large cargo trikes for mobile business. I can’t begin to list the applications for this kind of vehicle, but one special note is that as a bicycle it can access places that are barred to food trucks or full-sized vehicles. On demo was a coffee and beer trailer, but with three sizes of chassis they currently build from, they can literally cart about 800 lbs. Toward the end of the event that day, I drove the trike with three grown men in the trailer, doing circles and testing the top speed. I stopped myself at about 13 mph since all of the cargo weight was about 6 feet off the ground. No grown men were harmed in the making of this review. 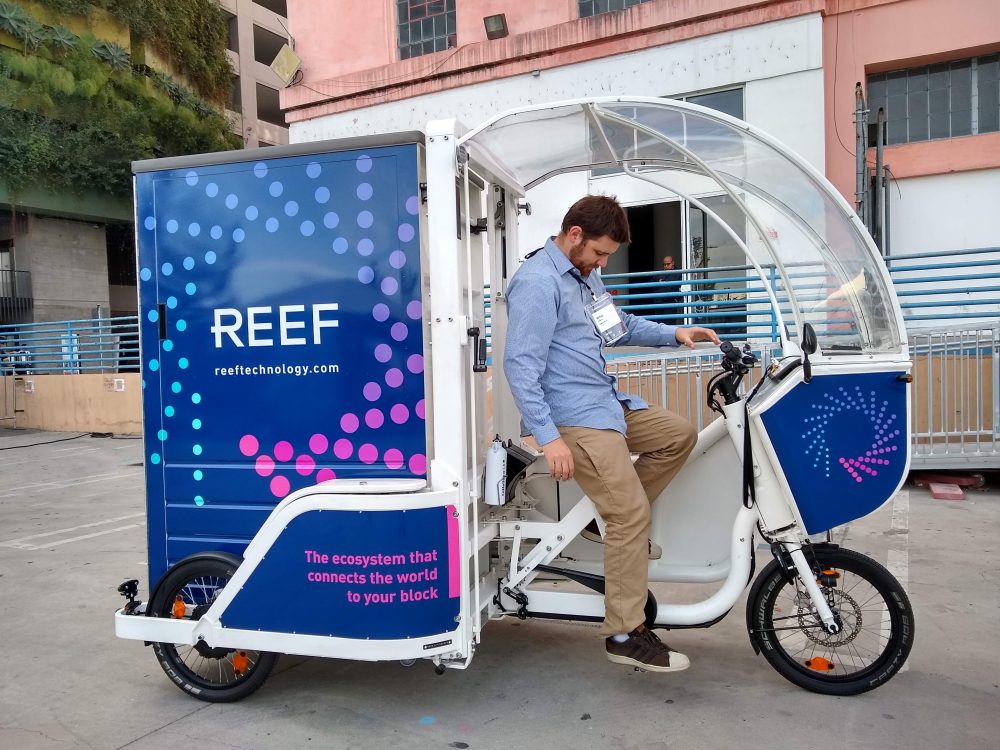 In a similar vein to Coaster cycles, Rytel/Silver Eagle has a single cargo trike platform with a tall, easily removable payload. Powered by two electric motors and two 36 v 20 ah batteries, this hauler has a myriad of logistics applications in dense urban environments. As expected, it was most comfortable driving straight and turning slow, but I can’t help but question the electric system: two motors, each rated for 125 watts of power. Rytel/Silver Eagle is currently servicing large-order fleet customers, but if you’re curious, a single unit can be purchased privately. It’s priced at $17,950. 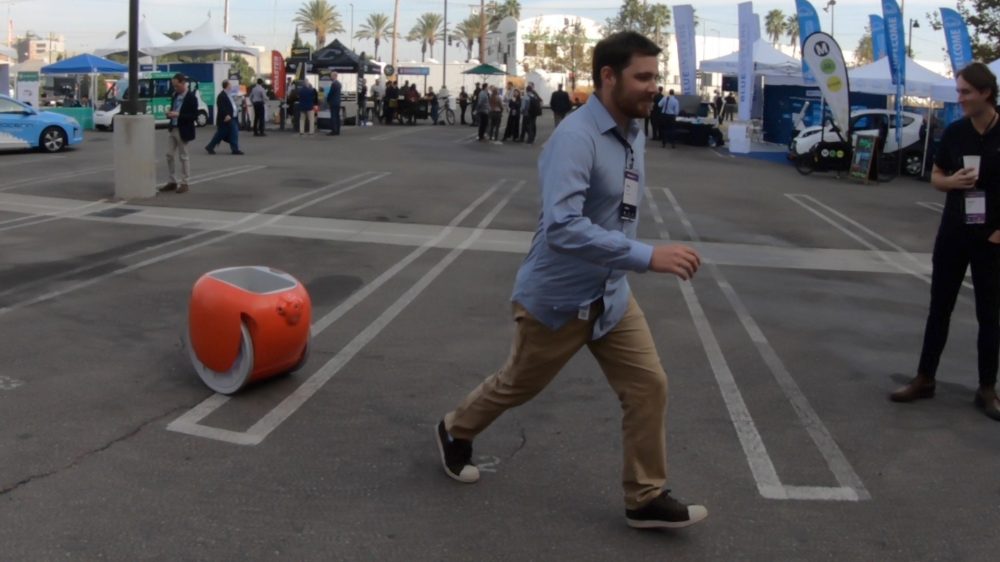 Gita, a crate that follows you 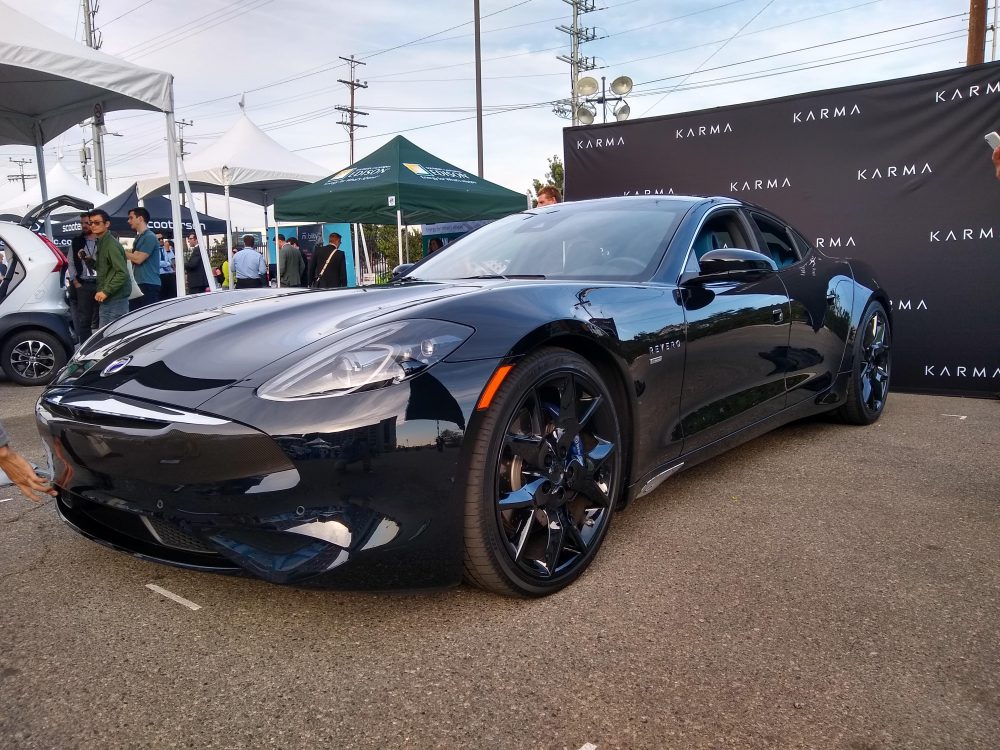 Karma continues their presence in anticipation of their upcoming GTS and SC2 official announcements. Karma, which we’ve covered in previous Electrek posts, is making headway as one of the few companies making a truly high-end hybrid. Stay tuned to Electrek for more coverage, but for now, the GTS is expected to have an 80-mile all-electric range and a 0-60 time of 3.9 seconds. It’s quite impressive for a vehicle carrying two drive modes weighing in at about 5,000 lbs. 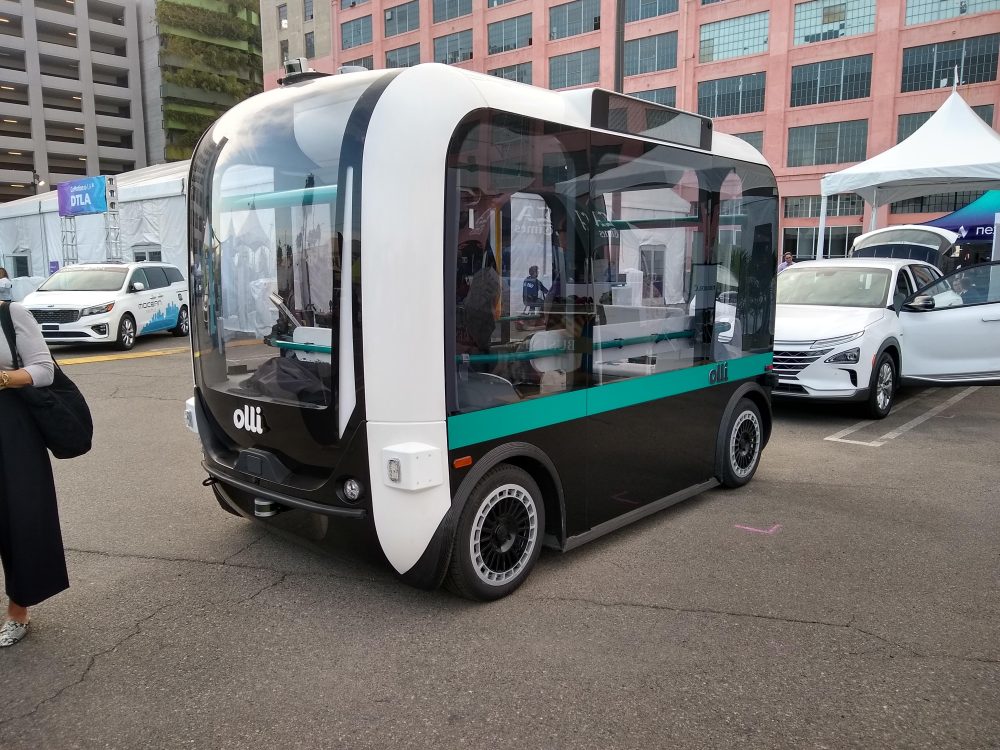 Already in the wild is the Olli. At first glance it looks like a gondola on small wheels, and when you get inside it feels that way, too. What I didn’t notice was the many sensors probing from all sides and cameras to boot. Olli is a self-driving, low-speed transport best used on closed campuses, circulators, and as a basic shuttle. Given the hectic environment of the show, we couldn’t see it ride, but capping at around 15 mph, it probably rides like a gondola, too. 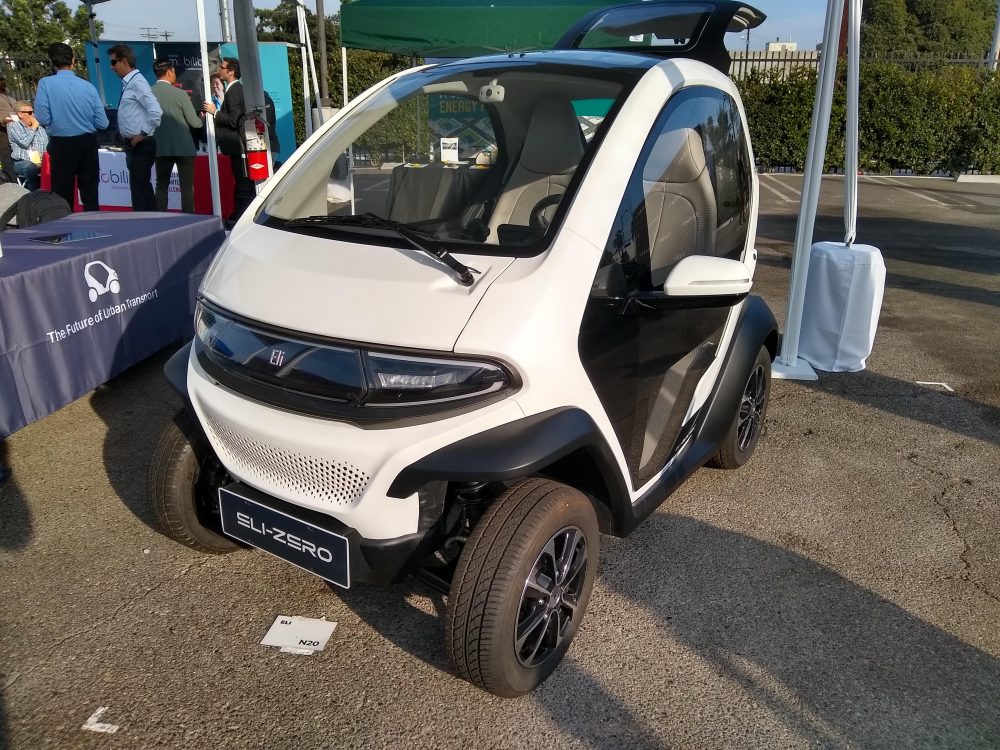 Eli Go, I want to want it

Last but not least is the Eli Go. I have a special place in my heart for micro-EVs, and the Eli Go caught my eye as a side-by-side EV for tiny trips. It’s small, simple, spacey-looking, and reliant on the sunroof and climate control (the windows don’t open). Eli is coming to the US as a Neighborhood Electric Vehicle (NEV) where applicable. In brief, some states have laws that classify low-speed electric vehicles as legal golf carts. Depending on where you live, the Eli will be limited electronically for either a 25 or 35 mph top speed. 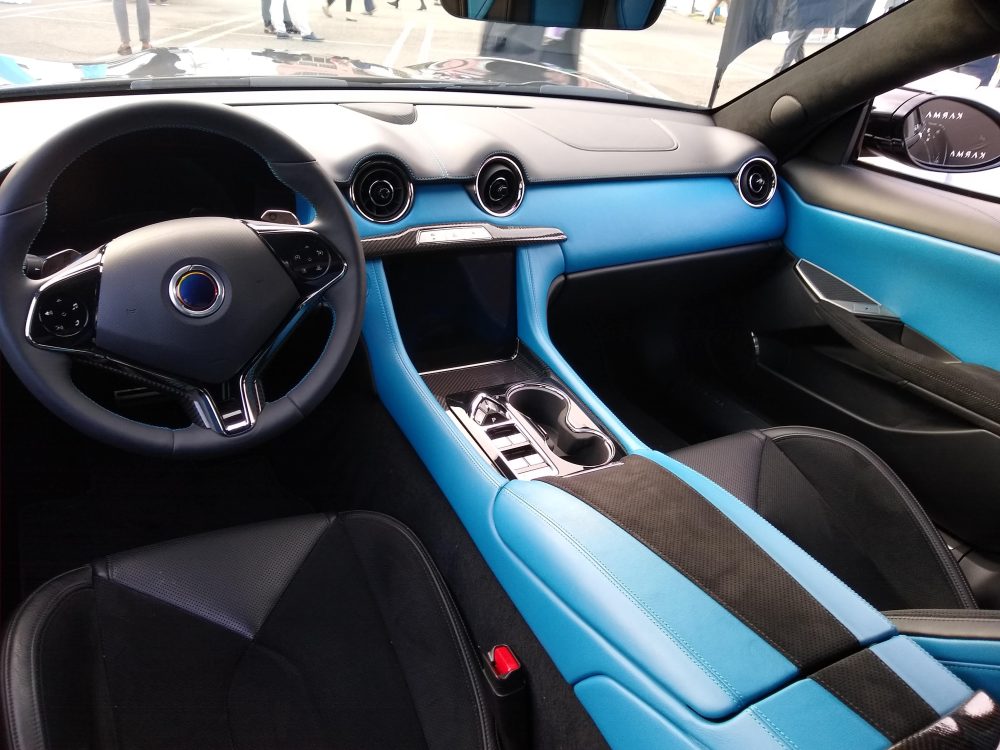 It’s great to see prototypes and demos out of their labs an on the pavement at ComotionLA. It’s a great opportunity to see what’s on the horizon, encourage innovation, and challenge the existing model of transportation from every single angle. If you haven’t noticed by now, the future of transportation is electric.