California officially ended its eight-year drought in March 2019. Everyone hoped the end of the drought would quell 2019’s summer wildfires in the state. So why are the fires still bad this year? Park Williams, an assistant research professor at Lamont-Doherty Earth Observatory at Columbia University, said there are three reasons, according to the New York Times.

Delayed rains: California receives about 90% of its annual rainfall between October 1 and April 30 each year. And this year, the rains are late.

Seasonal winds: California has winds that move from east to west, over deserts and mountains to coastal areas. That compresses the air, and the air then gets hot. And that’s fine, as long as it rains. But it’s not raining yet, so it makes the dry environment ripe for fires. And it’s humans or infrastructure who almost always start the fires, not lightning.

Climate change: “It is fair to say that everything that’s occurring today is about 3 degrees Fahrenheit warmer than it would have been if the same Santa Ana wind event were happening 100 years ago, and that’s important,” says Williams.

Of course it was Halloween on Thursday, so the New York Times got into the spirit of things by highlighting “energy vampires” in their “Climate Fwd:” newsletter. So what exactly are energy vampires?

Also known as phantom power and ghost load [well, isn’t that Halloween-y as well] the term refers to items plugged into an outlet that draw power even when they aren’t being used.

Think about all the appliances plugged in throughout your house that draw energy without being actively used: printers, surround-sound stereo, TVs on idle, computers in sleep mode. It’s probably worth a walk-round to survey exactly what’s plugged in and “on.”

The Times recommends a free app called Dr. Power — by HEA, which, in the app’s words, “helps you identify wasteful use of energy in your home.” But here’s the problem: When I went to sign up, it’s only for California residents. Sigh.

So it looks like I’m going to just have to use common sense for now, since I don’t live in California. But thanks, New York Times, for flagging up the stuff that really doesn’t need to be plugged in. Because, not only will I save money by tuning in and turning off, in their words:

That translates to around 44 million tons of carbon dioxide, or 4.6% of the country’s total residential electricity generation.

Now, that is scary.

The Nordic Council awarded climate activist Greta Thunberg the 2019 environmental award. She declined the award, and the prize sum of about $52,000. Her reason? As she explained on Instagram (below) and highlighted on Twitter:

The climate movement does not need any awards. What we need is for our politicians and the people in power [to] start to listen to the current, best available science.

Sweden and Norway nominated her, but she points out that Norway “recently gave a record number of permits to look for new oil and gas.” She recognized the work the Scandinavian countries have done. She also pointedly gave examples of what is still to do in that region to reduce emissions.

Tesla CEO Elon Musk announced on Twitter late Tuesday afternoon that he’d donate 1 million trees to the #teamtrees project, which was launched by YouTube star MrBeast. He then changed his Twitter name to “Treelon” Musk.

YouTuber Jimmy Donaldson, aka MrBeast, was challenged in May on Reddit to plant 20 million trees to celebrate reaching 20 million subscribers on his YouTube channel.

So he launched #teamtrees with other YouTube stars on October 25. The project has a target of raising $20 million to plant trees in order to help the global environment. Each tree costs $1.

Tesla CEO Elon Musk asked about the project on Twitter, and then committed to donating 1 million trees on the spot. He then changed his Twitter name to “Treelon.”

When more fish are being pulled out of the ocean than are being replenished, it’s overfishing. And according to the World Economic Forum in 2018 via the Food and Agriculture Organization of the United Nations, “Nearly 90% of the world’s marine fish stocks are now fully exploited, overexploited, or depleted.”

So hotel chain Iberostar, which is headquartered in Spain and owns more than 120 hotels globally, has worked to improve the sustainability of the seafood they serve. And that’s a difficult thing to do, reports Fast Company:

To put it in perspective, Iberostar’s restaurants in the Dominican Republic had to ban 34 species of sea creatures from their menus to meet this goal. Today, the hotel chain reports serving close to 19,000 pounds of MSC- and ASC-certified seafood per month — the equivalent of about 86,000 servings.

Iberostar joins other big hotel chains who are working to improve the sustainable sourcing of fish, such as Hyatt, Hilton, St. Regis, and InterContinental.

Dengue fever is the fastest spreading tropical disease. Forty percent of the world’s population is currently at risk, and dengue is only going to continue to spread. Why? Because of a warm, wet environment due to climate change.

The Washington Post reports: “Present in fewer than 10 countries in the 1970s, it has since spread to more than 120… The mosquito that spreads dengue — Aedes aegypti — thrives in warm temperatures and urban environments. The ideal temperature range for the mosquito to transmit the virus is between about 70 and 93 degrees [Fahrenheit], researchers say.”

Watch this video from Bloomberg to find out specifically why and how it’s spreading, and what scientists are attempting to do about it. (Disclosure: I got dengue fever when I lived in Barbados. It was the worst I have ever felt, and you just have to wait for the disease to run its course. But I was lucky: My neighbor got it, too, and she was hospitalized.)

Right. In one of the most depressing stories I think I’ve ever written about in this column, New York magazine’s Intelligencer (and a lot of other outlets) report that rising seas, which are already scary, are actually even worse than we thought, and they’re going to deeply affect the environment by putting a lot of cities underwater.

In a new study published by the journal Nature Communications, scientists affiliated with the organization Climate Central and Princeton University… use artificial intelligence to determine — and correct for — the previous literature’s error rate.

The best available models suggest that 37 million people currently live in places that will be below high tide by 2050 — in an optimistic low-carbon-emissions scenario.

On Tuesday, a new study revealed that those alarming statistics… were wildly inaccurate. The actual impacts of sea-level rise are going to be much, much worse.

The MIT Technology Review breaks down the gloomy news in this chart: 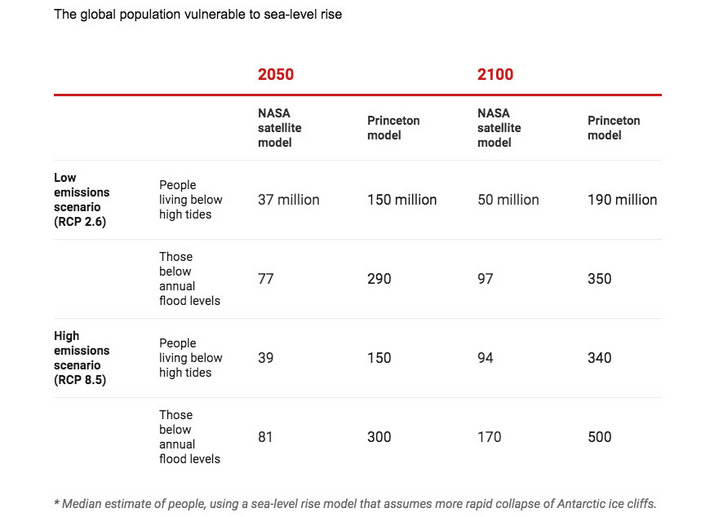 And Christopher Flavelle of the New York Times shared a comparative example of Alexandria, Egypt, on Twitter:

The effects of rising seas will be far worse than previously thought, wiping out entire cities by 2050, new data shows.

So what do we do?

If the Princeton researchers’ projections are correct, averting mass death and suffering in the coming decades will require not only rapidly reducing carbon emissions and ramping up construction of seawalls and other fortifications, but also facilitating mass migrations away from low-lying cities and islands and toward higher ground.

In other words, if we don’t sort this mess out, we’re all going to be living in a version of the film Waterworld.

It’s week four of Jane Fonda’s Fire Drill Fridays, and she was arrested yet again. Her companions-in-cuffs this week were actors Rosanna Arquette and Catherine Keener, as well as 43 others.

The three women and other protesters mixed it up this week in their climate crisis protests: They demonstrated inside the Hart Senate office building instead of in front of the US Capitol.

Efforts to turn back climate change can be exponentially enhanced if the needs and priorities of women were addressed. This is why the Green New Deal calls for inclusive representation of women in political and economic decision making around environmental and climate policies. Women bear the brunt and women hold many of the solutions to the climate crisis.

The #FridaysforFuture climate crisis strikes continue, and Electrek‘s Jameson Dow was at the Youth Climate Strike at Los Angeles City Hall yesterday, which Greta Thunberg attended and spoke at. Several thousand protesters attended, and demanded stronger climate action, including a drawdown in fossil fuel projects, from California Governor Gavin Newsom. Here are some photos of the event: