Review: The 43 MPH Currus NF electric scooter is built like a transformer tank 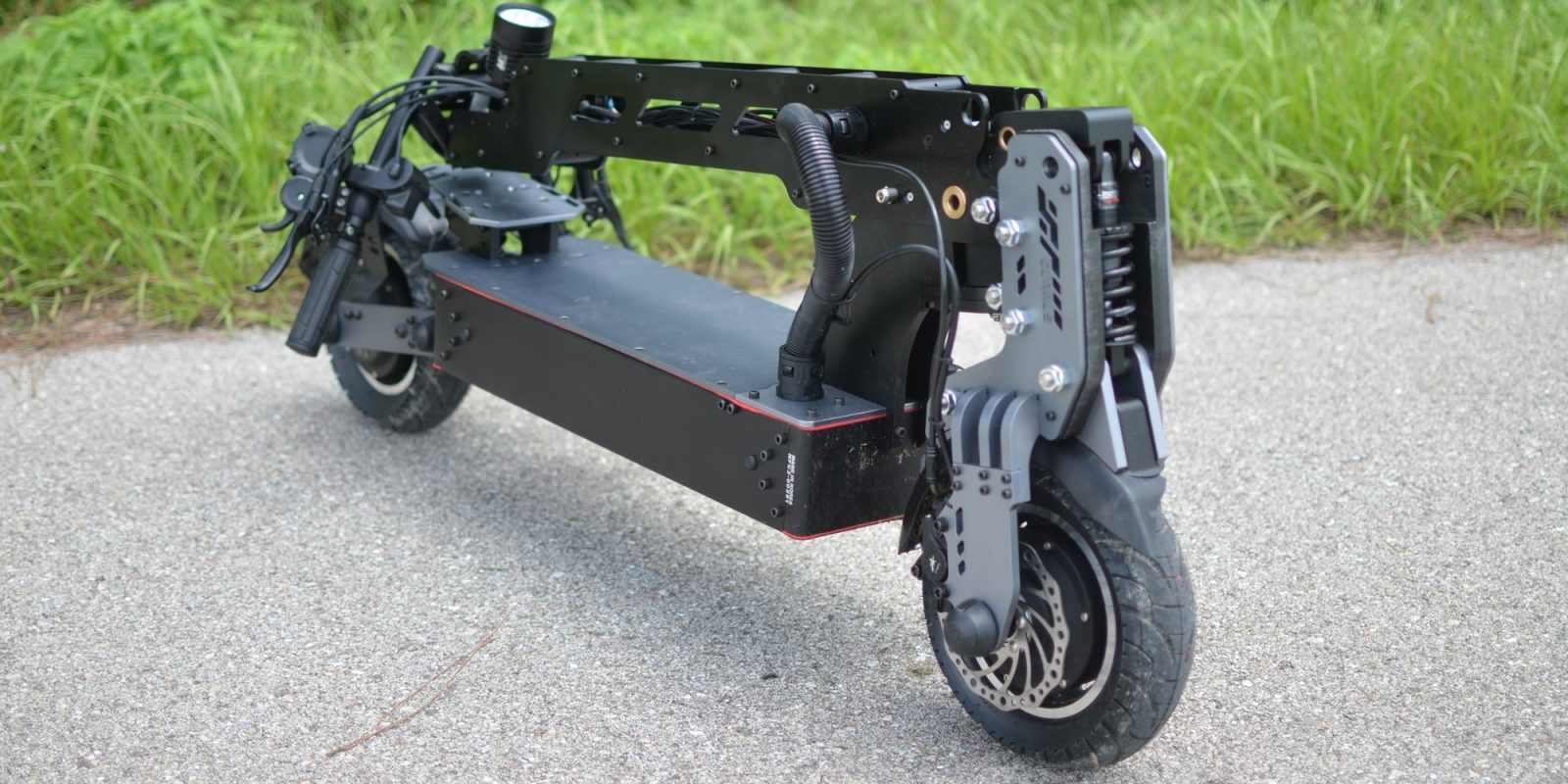 I recently got my hands on a high-power and high-speed Currus NF electric scooter from FreeMotionShop.com.

To me, it looks like a tank-based transformer. And while the only thing it actually transforms into is a folded version of itself, this Korean-made scooter still has more than enough design work to make it sturdy enough for just about any commuting job you can throw at it.

Make sure you check out my video review of this fast electric scooter below. Then keep reading to hear my impressions of the scooter.

The design and build quality of the Currus NF electric scooter is right up there with the best I’ve seen yet, which may help explain its rather high $2,799 price. While I may have seen faster scooters as well as higher capacity batteries, I’ve never before seen an electric scooter designed or constructed like this one.

The stem on the Currus NF isn’t the telescoping, tubular number found on most electric scooters. Instead, it’s made from parallel aluminum plates that have been precision cut and then bolted together like the world’s most powerful erector set. 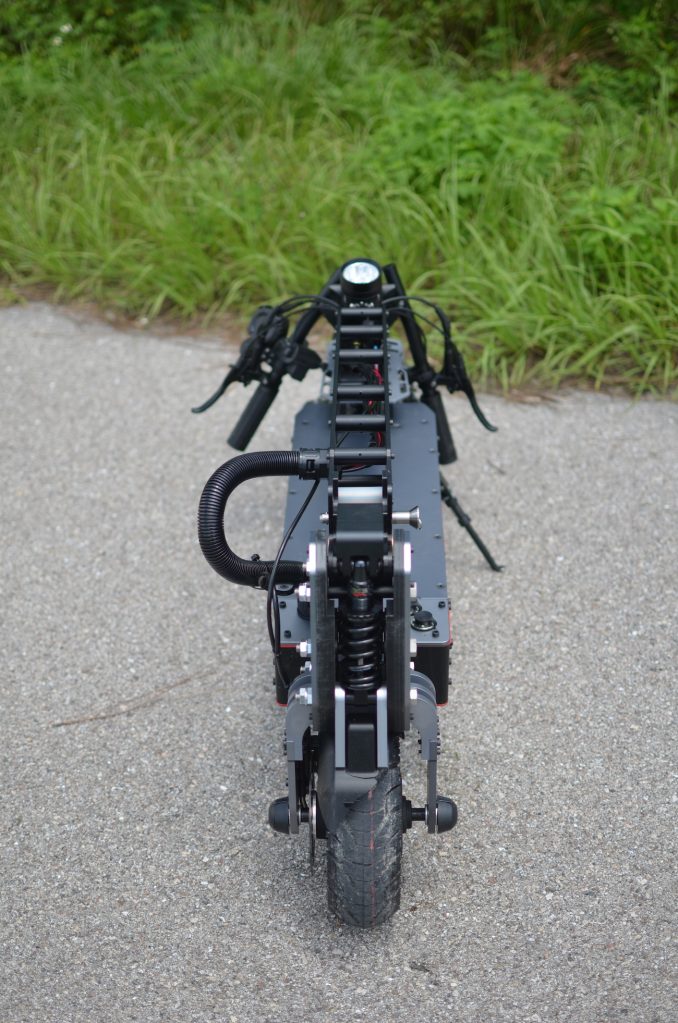 The deck is large enough to have its own zip code and you even get a second level to the deck in the form of a rear foot platform. I never quite figured out if I actually liked using the rear foot platform though, since it is elevated an inch or two above the rest of the deck.

Most the time I rode the Currus NF with both feet down on the deck, where there was plenty of room. 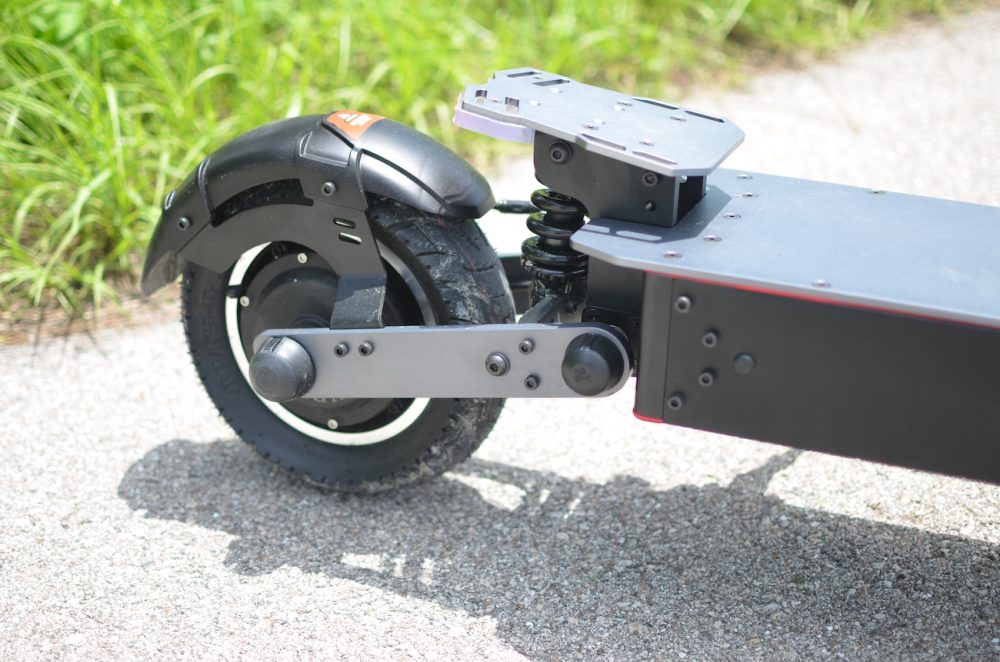 And the spacious deck makes sense, considering it covers a battery bay large enough to fit a 1.68 kWh battery pack. That’s three times the size of the battery packs that go in most electric bicycles. But if you’re going to be powering such a large scooter with dual 1.8 kW motors, it makes sense to stuff in the biggest battery that you can.

The front and rear headlights are plenty bright and will ensure that everyone sees you coming or knows you’re there when they pull up behind you. There’s no underdeck lighting, which is a bit of a bummer for a scooter in this price range ($2,799), but you can always add some inexpensive aftermarket underdeck lighting if you want. After all, it’s the head and tail light that are the most important for safety. Plus the Currus NF comes with a motorcycle horn, which is another great safety feature for when you need to make your presence on the road known to inattentive drivers. 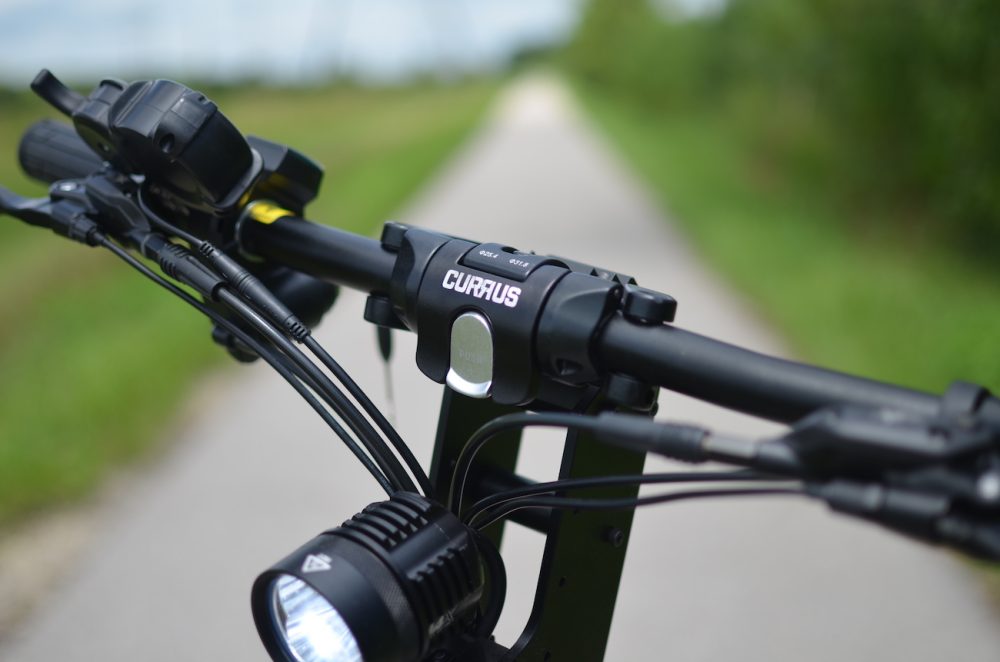 The pneumatic tires feel nice and big when you hit bumps, aided by the front and rear hydraulic suspension. At 10″, the tires are certainly larger than those found on entry-level electric scooters, but still aren’t quite as nice as big bike tires for hitting potholes. I am a big fan of those hydraulic disc brakes though, which are also becoming popular on electric bicycles. They mean less maintenance and more reliable brake pulls, not to mention the more powerful braking force you can exert with less effort.

And I’d be remiss if I didn’t mention the folding and locking mechanism, which is another weak spot on many budget electric scooters.

The Currus NF has a giant steel pin the thickness of your index finger that gets shoved through the folding mechanism in both the open and closed positions. There’s no ambiguity about whether the scooter is fully locked out or not. If you’re ever riding around and become unsure of whether you locked your scooter in the unfolded position, just look down. If there’s a big hunk of steel pin preventing the scooter from folding, then you’re good.

I love that the same pin holds the scooter in the folded position too, considering how much the scooter weighs. At just over 80 lb (37 kg), this thing isn’t just built like a tank, it feels like one too when you pick it up. I’d say it’s light enough to lift into a car trunk or truck bed, but that’s about it. You don’t want to walk around a subway station or carry it up a flight of stairs unless you really have to.

The ride quality feels great and the scooter is easy to use. The bars are wide enough to give a good feeling of control at high and low speeds. The power is borderline unnecessarily strong – but that’s also what makes the scooter so much fun. It launches you off the line and also has the power to drag you up just about any hill you can find.

The only area I’ll ping it is on high-speed ride-ability. While it can hit speeds up to 43 mph (70 km/h), I felt much more comfortable sticking to the 30-35 mph range. At that speed, the scooter rides like a dream. But once I would approach 40 mph, the scooter felt a bit twitchier and just didn’t inspire the same level of cool confidence it did in the 30s. To me, it seems like the rake angle is a bit steeper than most scooters I see, and perhaps this contributes to the feeling at higher speeds. But I’m no expert when it comes to electric scooter design. I just know that the sweet spot to me feels like sticking to around 30-35 mph. At that level, I feel perfectly safe and the scooter is a blast to ride.

A funny side note is that the scooter doesn’t come from the factory as a 40 mph capable machine. It has a speed limit of 12 mph or 20 km/h from the factory. That’s a legal thing, apparently. There’s a single orange wire in the wiring bundle that passes from the stem into the deck. If you ever pull the plastic sheath off of the wiring bundle, be VERY CAREFUL not to cut that orange wire. Doing so will completely remove any speed limit on the scooter. I must have accidentally cut mine when my wire snips fell off my desk and onto the wire that I had carelessly exposed by pulling it out and neatly separating it from the rest of the bundle. Don’t let that happen to you. Secure your tools.

Alright, all joking aside, I’d like to add one serious final note: Whenever it comes to high-speed scooters like these, I always gear up properly for the ride, and I highly recommend that you do the same. For me, that often means wearing the same gear I use when I ride my motorcycles. I’m talking about a full-face helmet, long pants, jacket, gloves, etc. Essentially, look at your body and any exposed skin you have. Then ask yourself, “am I ok with that skin not being there anymore if I go down?” If the answer is “no,” then cover it. As we say in the motorcycle community, “Dress for the slide, not for the ride.”

I don’t say that to scare anyone away from high-speed electric scooters. In fact, it’s the opposite. I think these are actually highly useful commuting tools that cities can greatly benefit from. But that requires people to ride safely and responsibly, which includes wearing the proper riding gear.

Alright, that’s enough of a safety lecture from ol’ Micah. If you want to get your own Currus NF electric scooter, head on over to FreeMotionShop.com and check it out. And don’t forget to let us know what you think of the scooter in the comments below!