Oil giant ExxonMobil is headed to federal court in Manhattan on Wednesday, October 23 — and that legal battle may closely resemble similar battles in the tobacco industry.

The State of New York is suing ExxonMobil on charges that the company misled its investors about the climate crisis. And today, scientists at Harvard, George Mason, and Bristol universities released a report, “America Misled: How the Fossil Fuel Industry Deliberately Misled Americans About Climate Change.”

Geoffrey Supan, report co-author and a researcher in the department of the history of science at Harvard University, told the Los Angeles Times:

For 60 years, the fossil fuel industry has known about the potential global warming dangers of their products. But instead of warning the public or doing something about it, they turned around and orchestrated a massive campaign of denial and delay designed to protect profits. The evidence is incontrovertible: Exxon misled the public.

Scientific American published an article in July 2016 that stated that the Center for International Environmental Law (CIEL) in Washington, DC, analyzed documents at the University of California, San Francisco (UCSF), that showed that oil and tobacco have been linked for decades.

Geothermal over fossil fuels in Cornwall

Cornwall’s Eden Project and EGS Energy announced last week that they secured £16.8 million in funding to drill the first well for their pioneering geothermal heat and power project next summer.

Since we began, Eden has had a dream that the world should be powered by renewable energy… We believe the answer lies beneath our feet in the heat underground that can be accessed by drilling technology that pumps water towards the centre of the earth and brings it back up superheated to provide us with heat and electricity.

Geothermal will be a game changer for Eden, Cornwall, and the UK. The heat will be used for the Biomes, to grow food, as well as helping support the development of our long-awaited hotel.
Once up and running, our plant will provide more than enough renewable electricity and heat for the whole site, as well as for the local area. We will be drilling for good energy rather than bad. [Just in case it isn’t crystal clear, he means fossil fuels when he refers to “bad.”]

Cornwall’s final round of EU funding, the European Regional Development Fund, has contributed £9.9 million. Cornwall Council has contributed £1.4 million. Institutional investors have given £5.5 million. The money will pay for the project’s first phase.

Here’s a cool 54-second video overview of the Eden Project as a whole:

Actor and activist Jane Fonda, 82, headed back to the Capitol Building in Washington, DC, on Friday, as part of her new movement that she calls Fire-Drill Fridays to fight the use of fossil fuels and climate change. She was arrested for the second consecutive Friday, on October 18. This time, she was joined by actor and Grace and Frankie co-star Sam Waterston, 78 (right of Fonda in the photo). 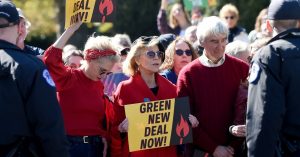 Fonda’s website states that she has moved to Washington, DC, and implemented Fire Drill Fridays, “to be closer to the epicenter of the fight for our climate. Every Friday through January, I will be leading weekly demonstrations on Capitol Hill to demand that action by our political leaders be taken to address the climate emergency we are in. We can’t afford to wait.”

Fonda and Waterston were among 17 people taken into custody by the Capitol Police for allegedly demonstrating unlawfully, said Capitol Police spokesperson Eva Malecki.

Solar PV installations on residential and commercial buildings will see rapid growth over the next five years, according to the latest market forecast from the International Energy Agency (IEA).

The IEA’s “Renewables 2019” market report was released today. It is the “market analysis and forecast from 2019 to 2024 on renewable energy and technologies. It provides global trends and developments for renewable energy in the electricity, heat and transport sectors.”

The report forecasts that the world’s total renewable-based power capacity will grow by 50% between 2019 and 2024. This increase of 1,200 gigawatts — equivalent to the current total power capacity of the United States — is driven by cost reductions and concerted government policy efforts. Solar PV accounts for 60% of the rise. The share of renewables in global power generation is set to rise from 26% today to 30% in 2024.

The commercial and industrial sectors will account for three-quarters of new installations over the next five years. This is due to economies of scale and bigger savings on electricity costs as fossil fuels decline. The number of residential solar rooftop systems on homes is expected to more than double to some 100 million by 2024.