You’ve heard the news: Chevy updated the Bolt EV with 259 miles of range. I loved the original Bolt EV so much I leased the first one so I could get my hands on it in early 2017 and have been driving it for almost 3 years on and off. My wife and I currently split time between the Bolt and our Tesla Model 3. So I was excited to see what Chevy had done in the time since and wow…

…they’ve really not done that much. The headline feature is the 10% extended range of the LG battery pack.

“The Bolt EV set the benchmark for long-range, affordable electric vehicles, and we’re excited to raise the bar by offering nearly 10 percent more EPA-estimated range for the 2020 model year,” said Tim Grewe, director of Global Battery Cell Engineering and Strategy. “At Chevrolet we’re constantly listening to customer feedback and we heard the desire for more range. The team worked diligently to find ways to improve battery energy, giving customers the confidence to go more than the extra mile.”

While the Bolt charging hardware is the same as the original car’s, Chevy is able to keep charging at the max rate longer, even past 50% of range we would later find out.

In addition to this, cold charging is now faster. That lets you put 100 miles of charging range on within 30 minutes, a 10-mile improvement. This seems like the improvement is almost all on LG’s side of the ball.

We got a first-hand look at the new cells and, with the exception of the green instead of yellow tape they were the exact same size and a negligible bit heavier. 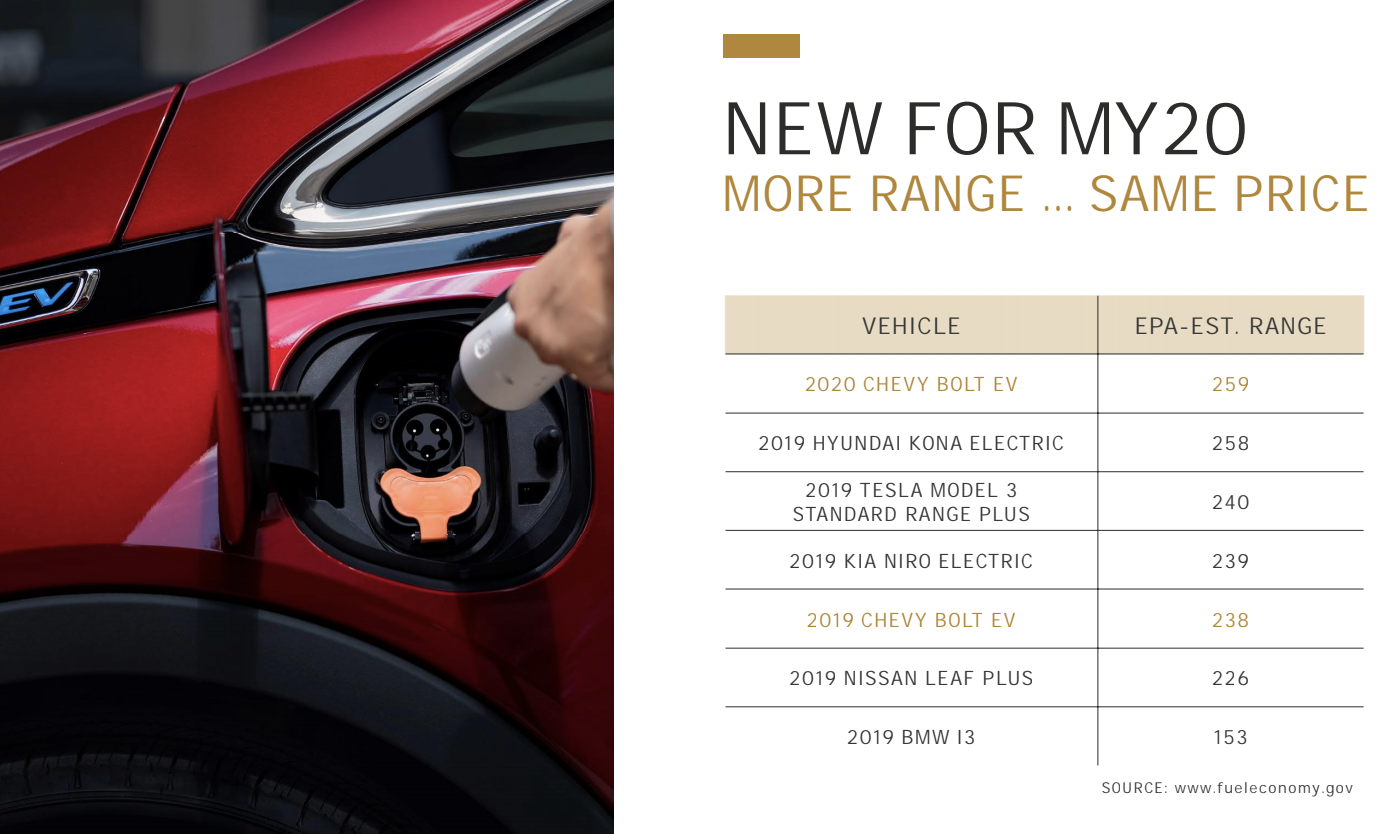 That is negated by pack efficiencies. GM didn’t say it but I’m pretty sure this was all on LG’s side since all of the other LG-celled EVs are getting similar updates.

As for Chevy improvements, there was a dimple put on the battery charge port I found out last year but it was new to me. Also, the rearview and parking/driver-assist cameras were upgraded with a higher quality HD camera and some new menu options.

There is a new AVAS system for alerting pedestrians to noiseless EVs which has a new sound and front and back speakers. Finally, the plastic grill on the front now has some 3D bumps on it while earlier the bumps were simulated. And obviously, there’s that Oasis Blue (and familiar burnt orange) color that you’ll see plenty of in the gallery below.

Chevrolet was nice enough to fly us out to the West Coast and put us up in lovely hotels in Tacoma and Portland for this drive and the whole experience was very nice and mildly informative. Our drive left the Tacoma hotel at around 7:30 am and I partnered with EV Journalist and friend Tom Moloughney for the drive. 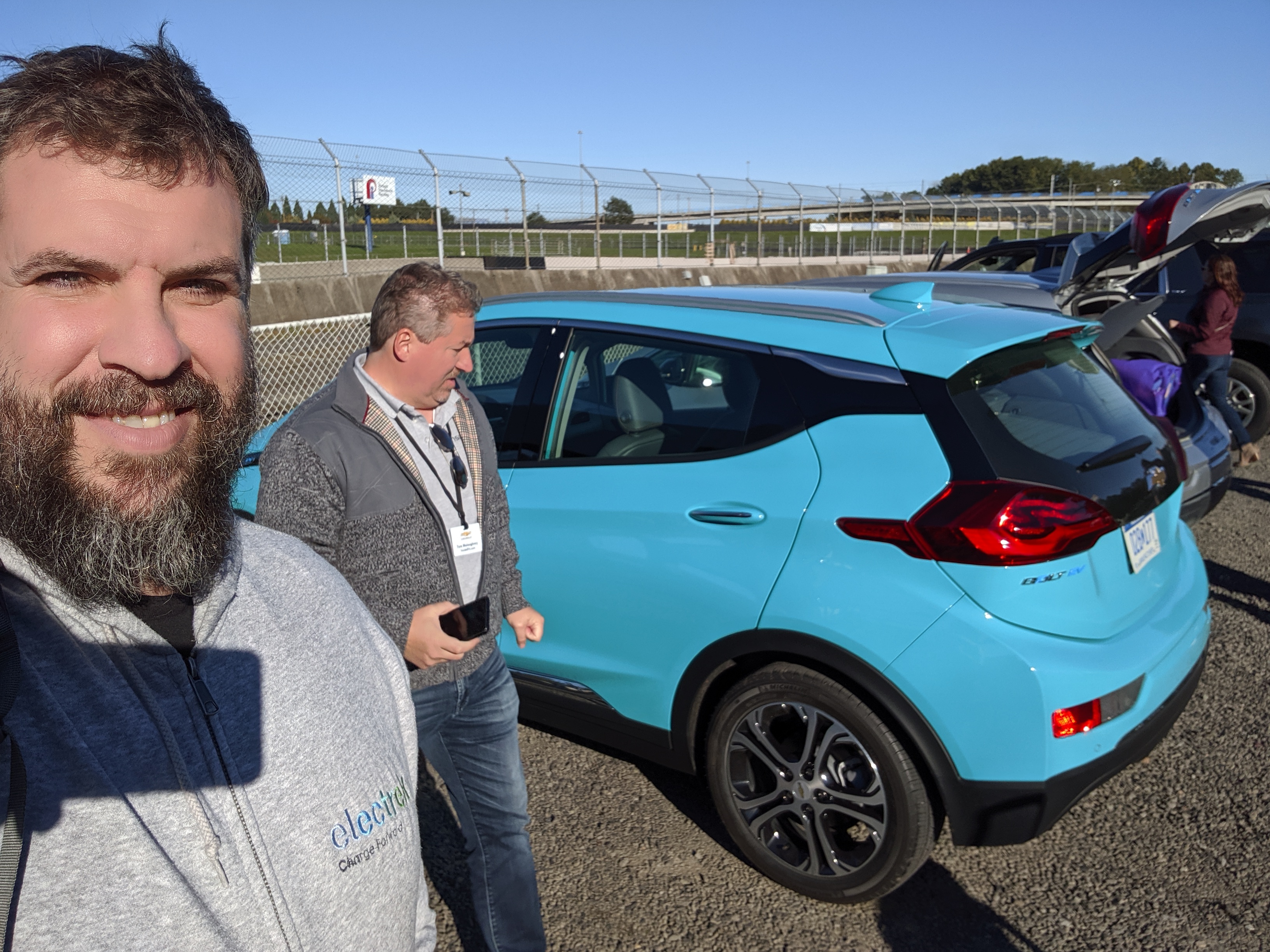 The big problem was that it was about 32 degrees F (0 C) at the time of departure and these cars weren’t or weren’t able to be preconditioned. I’ve learned to easily do this on my home Bolt every day from October to April in New York. It requires about 15 minutes while plugged in and warms the battery with the charger instead of precious battery range. The cold battery showed just under 200 miles of range (instead of the advertised 259 miles). Perhaps Chevy was showing us how heating the battery was now quicker and more efficient?

Nope! For the first leg of our trip, we averaged about 2 miles per kWh which is less than half of what I expect on my current Bolt EV even during the winter, so long as I precondition the battery. That put us way under the amount of range we would need for the 200-mile trip. We also heated the car to about 70 degrees, drove in “Low” or regen brakes mode and didn’t do any crazy driving. In fact, we were in traffic on a highway which I typically go over my Bolt’s range.

Luckily, GM had a contingency plan for such a problem and could show off the Bolt’s longer fast charging at an Electrify America along the way. After doing some hypermiling – not something you want to have happen on a trip where the only big feature addition is more range – we rolled into an Electrify America on “low range”. Chevy conveniently stops telling you how much range you have at about 14 miles so you really have no idea when you are going to run out. I had never been this low in 3 years with my own Bolt so I guess this is what range anxiety is all about?

Every other Bolt on our drive needed a charging stop so our car wasn’t a fluke. Additionally, a few writers I talked to who rode the day before which was warmer didn’t need the charging stop – so it must have been the cold and lack of preconditioning.

We did experience faster charging at the Electrify America which did randomly stop charging once as you can see in the video above. 3/4 stalls at the Kelso Washington station were working and we were able to see charging as high as 54kW and sustained that charging to over 50% which does verify GM’s claims of faster and colder charging improvements.

I’m sorry but I have to keep it real here. Chevy has been incredibly disappointing in taking feedback from the original Bolt and improving the vehicle. The #1 complaint from 2017 and probably easiest to fix: the lateral seat support. The new Bolt feels almost exactly like mine even though modest seat padding improvements were supposedly made in 2018. The #2 problem is probably fast charging peak rate which I think Chevy could have addressed in a small hardware update. Just getting to 80kW like the Kia Niro/Soul and Hyundai Kona would have sufficed just from a specs sheet standpoint.

Chevy showed us a prospective tire improvement which would have been my #3 complaint but it was still in the undrivable prototype stage and didn’t look like it would be coming any time soon. So wheels and tires are the same.

My number 4 improvement would have been the dealer experience and I’ll get to that a little later but GM gave itself high marks there.

As the journalists were shuttled back from the drive, a number of theories for the lack of improvements were proffered, none of which we’ve been able to verify. One is that Pam Fletcher, the Bolt’s original leader was moved off the project and since then a skeleton crew has been maintaining it while the new “A team” works on GM’s next set of electric vehicles. Again, I can’t verify this but it would make sense. Chevy was supposed to have 2 new EVs by this point so something is definitely up.

It is still troubling that GM’s now only electric vehicle is stagnating so significantly, particularly when others like VW and Hyundai are theoretically starting to ramp up. I was again disheartened to hear that important Chevy Bolt employees didn’t buy the Bolt for themselves because they weren’t comfortable with the charging situation (a repeat of what I heard in 2016). My gosh you are GM! Put some charging stations 200 miles outside of Detroit so your employees can visit their friends and families in an EV.  You could split the cost with Ford and FCA if it is too expensive. This isn’t rocket science!

For the record, GM did say that they had a partnership press release related to charging infrastructure that may bear fruit at an undetermined time in the future. Suggestion: Make every one of your dealers keep open a 55kW charging station 24 hours a day at break-even prices. See that dealer placement map above? Would be nice to have that also be a charging network.

It just doesn’t feel like GM is taking EVs seriously. CEO Mary Barra, who when it comes down to it bears responsibility for this, says she drives a Suburban so that’s not helpful.  I really hope someone can rescue GM’s attempts at an EV.

And that’s the most tragic part. The Bolt deservedly won the 2017 Motor Trend Car of the Year award and other accolades. It was such a great car that I not only bought one but never have regretted my decision. In fact, almost the exact car that I have now with 21 extra miles of range is still a great car.

Even with almost no work since 2016, GM’s Bolt is still one of the best EVs out there. As my lease expires, I’m still tempted to re-up with a 2020 or just buy out the old one. The Bolt is super quick off the line with tons of torque. It’s a small, sporty outside package that owners love to drive. I think GM gave up on calling it a “micro crossover” and really should start marketing it as a “hot hatch”. I really love the car and have throughout my 3 years with it.

Sure the interior doesn’t correspond to the car’s $38,000 before dwindling incentives (now $1,875 Federal, expires at the end of March 2020). By the way, with GM’s workers currently on strike, it isn’t certain if the 2020 Bolt will be available for that March 2020 Fed Tax expiring deadline.

Maybe another GM brand like Buick or Cadillac would be better at interior design. Or maybe GM should bring back Saturn as an EV only brand?

The problem is that when I go into my Chevrolet dealer (Curry in NY if anyone cares) to inquire about renewing my lease, the salespeople come at me with crazy new deals on sporty SUVs or other nonsense. When I ask about the new Bolt, they just give dumb stares and point me to the guy in the back closet who is here on every other Wednesday who knows about the Bolt. There are zero Bolts visible on the lot. Again, nothing has changed since 2017.

As for what’s to come, Chevy left us with this slide: