Tesla found another advantage to its highly-connected vehicles. The automaker sent out an in-car warning to owners about an upcoming power outage – recommending them to get a full charge.

PG&E, the largest electric utility in Northern California, started cutting power in regions around the Bay Area in a planned de-energizing measure that could affect over half a million people over the next week.

The extreme measure was put in place due to extreme fire weather conditions with a windy and dry forecast for the region.

Over the last few days, they have been warning customers and Tesla took notice since their vehicles are very popular in the Bay Area.

Tesla owners in the region started reporting last night that Tesla sent out an in-car warning about the situation (via Michal Simek on Facebook): 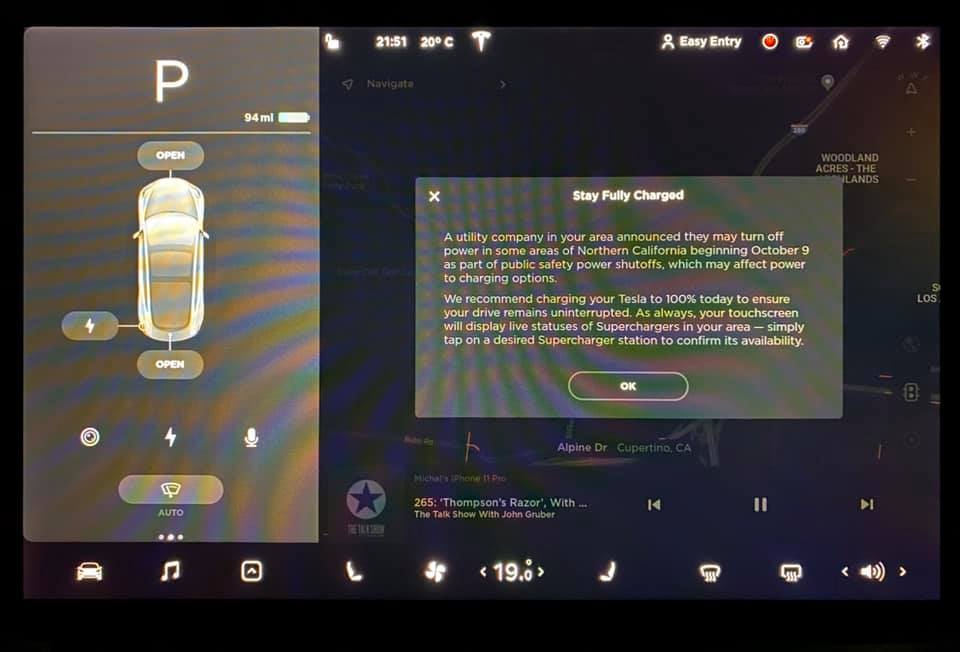 The automaker wrote in the warning:

“A utility company in your area announced they may turn off power in some areas of Northern California beginning October 9 as part of public safety power shutoffs, which may affect power to charging options.”

“Charging options” include both Tesla’s public charging stations and owners’ own home charging solutions if PG&E ends up shutting down power in their homes.

“We recommend charging your Tesla to 100% today to ensure your drive remains uninterrupted. As always, your touchscreen will display live statuses of Superchargers in your area – simply tap on a desired Supercharger station to confirm its availability.”

Tesla owners generally don’t charge their vehicles to 100% on a daily basis in order to improve the longevity of their battery packs.

The automaker has been using the same in-car warning system to help owners when hurricanes are coming their way.

Tesla Powerwall owners are also getting some help from the company for the power outages:

Earlier this year, Tesla added a new ‘Storm Watch’ feature to the Powerwall to detect storms and prepare by storing energy in case of power outages.

The Tesla app notifies customers that Powerwall has activated Storm Watch. The mode remains active until the weather event ends, at which time the system returns to its previously selected mode. It is possible to disable this mode by going to the Tesla app, selecting ‘Customize’ and then ‘Storm Watch.’”

As we can see today, it’s not only used for storms but any kind of event that could lead to power outages.

Most recently, it was used in anticipation of power outages due to wildfires in California.

This is a great example of Tesla using the connected capabilities of its vehicles to help out owners.

Of course, the power outages are not great for electric vehicles, but most owners are going to be fine for a few days with a full charge.

Also, there are likely going to be several charging solutions still available within a reasonable distance.

That’s where bi-directional charging could be useful. EV owners could even go charge at those stations and come back home to power their homes with their EVs.

Some automakers are working on the technology and doing some pilot projects, but it’s not being used widely yet.

We’ve even heard rumors of Tesla building the capability in the Model 3 inverter, but we haven’t confirmed it yet. If you know anything about that, please reach out.