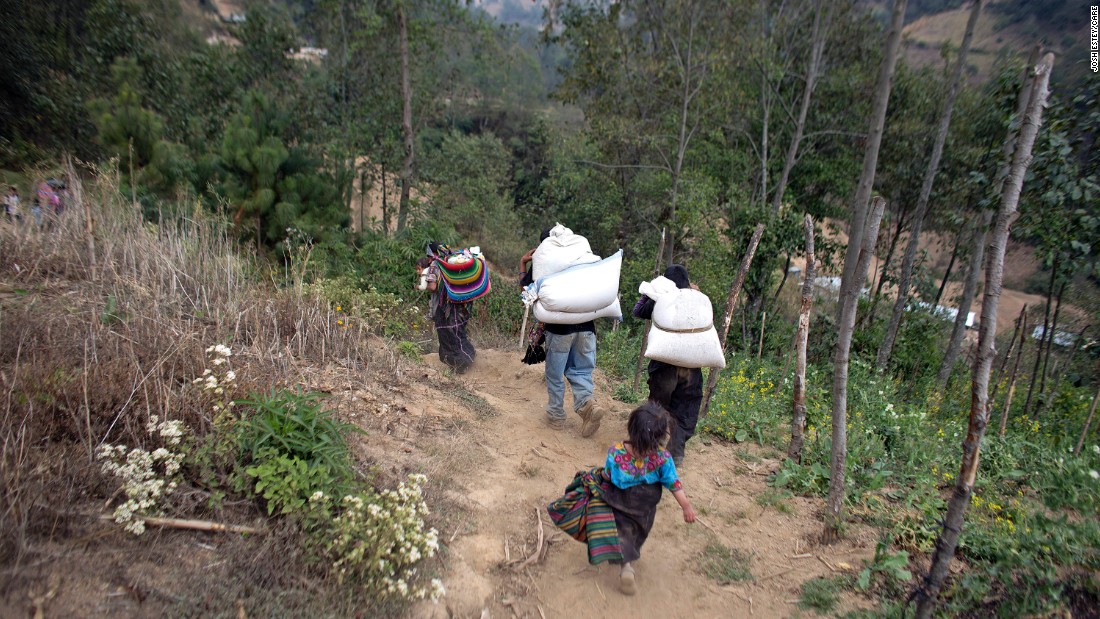 An internal report by US Customs and Border Protection (CBP) shared with senior Homeland Security officials concluded that “crop shortages were leaving rural Guatemalans… in extreme poverty and starving,” reports NBC News, who obtained the document.

But the Trump administration ignored the report and froze $170 million in foreign aid for Guatemala, Honduras, and El Salvador.

With evidence of a correlation between acute food insecurity and migration in hand, the Trump administration instead focused on an agreement with the government of Guatemala to stem the flow of immigrants through law enforcement means.

Guatemalans are the largest source of undocumented immigrants to the US in 2019.

Scientists have said the increase in poverty and food insecurity driving migration are due to multiple factors, one of which is climate change.

The US has provided $150 million through the Overseas Private Investment Corporation to fund Guatemalan housing. But there has been no action to address climate change or the unstable food supply.

However, Guatemala’s meteorological service announced this week the launch of a seasonal forecasting system that will help farmers decide when to plant, and thus mitigate some climate change factors.

Over 58% of Guatemala’s energy comes from renewable sources, and the country says it is expecting to reach 80% by 2027.

#Trump admin “ignored its own evidence of #ClimateChange impact on #migration from Central America” preferring to sow hate than go green. #ClimateStrike https://t.co/FAylMnqNrP

Nitrous Oxide (N2O), according to a study in Nature Climate Change on ResearchGate, “is an important anthropogenic greenhouse gas and agriculture represents its largest source. It is at the heart of debates over the efficacy of biofuels, the climate-forcing impact of population growth, and the extent to which mitigation of non-CO2 emissions can help avoid dangerous climate change.”

An estimated one-third to one-half of the nitrous oxide released into the atmosphere today is a result of human activities. The biggest culprit: the increase in agricultural lands and synthetic fertilizer use in agriculture, which has steadily increased in recent decades. And industrial farming — especially of annual crops like vegetables and grains — are especially to blame, as farmers tend to over-apply fertilizers to boost their yields.

Although nitrous oxide accounted for just 6% of U.S. greenhouse gas emissions in 2017, it’s significantly more potent than CO2 or methane when it comes to driving climate change. Pound per pound, it’s almost 300 times more powerful than CO2 and remains in the atmosphere for well over 100 years before it’s destroyed by chemical processes.

So what can the agriculture sector do to feed their crops without creating N2O? In short, farmers have to use fertilizer more efficiently, both in terms of timing and volume. The most obvious way is to go organic, which releases nitrogen more slowly. Another option is slow-release fertilizers. It might be a bit nerve-wracking initially for farmers, who of course worry about output, but it pays off in the long run — it’s regenerative.

A Florida green energy bill that died last year has been put back on the table. But this time, its Democratic sponsors are a bit more hopeful that it might have a chance at succeeding in 2020.

Florida’s prosperity is inextricably tied to our environment. Our beaches and our water are among our state’s chief economic assets, and as the trustees of our state, we have an obligation to protect and enhance those assets. We need to stop being afraid of words like “climate change” and “sea level rise.” Frankly, we do this too often as conservatives. We confuse acknowledging a problem with acquiescing to a particular solution.

(But let’s not get ahead of ourselves; Sprowls also said: “Floridians aren’t interested in the utter nonsense of the Green New Deal.”)

Co-sponsor Senator Jose Javier Rodriguez, who represents District 37 in Miami, noted the “shift in tone” from Republican leadership and said:

There are not jobs in oil and gas, this is a solar state. If we break the stranglehold the utilities have on energy policy here in Tallahassee, we will unleash jobs in renewable energy.

It’s the country’s sixth wind farm, which outputs a total of 171.6 MW. Kovačica’s output is 104.5 MW, thus giving the wind output a huge boost in the Balkan country.

According to Balkan Green Energy News:

The Kovačica wind farm will supply 60,000 households and reduce CO2 emissions by almost 250,000 tonnes per year.

The Western Balkans used to depend heavily on coal for electricity generation.