Tesla is making a lot of moves in the battery space lately and now it has added a patent for a new longer-lasting battery cell with better performance and cheaper cost.

Last week, we reported on Tesla’s battery research partner, Jeff Dahn and his team at the Dalhousie University, unveiling the impressive results of tests on a new battery cell that could last over 1 million miles in an electric vehicle.

Now Tesla has filed for a new patent on which Jeff Dahn and his team are listed as inventors and it’s for a new battery cell that sounds a lot like what was tested in the other research.

They describe the electrode in the patent application:

“In particular, positive electrodes made from single-crystal NMC532 have been shown to be particularly robust, in part because the grain size of NMC532 is larger than the grain size of other standard NMC materials that are more polycrystalline, having smaller grain sizes.”

The new patent focuses on a new battery cell using two additives in the electrolyte, vinylene carbonate (VC) combined with 1,2,6-oxodithiane-2,2,6,6-tetraoxide, in order to boost the performance of the cell.

In the patent application, they explain how additives have shown an increase in performance, but other researchers have focused on a combination of many additives and it’s hard to understand how they work together:

“Electrolyte additives have been shown to be operative and increase the lifetime and performance of Li-ion-based batteries. For example, in J. C. Burns et al., Journal of the Electrochemical Society, 160, A1451 (2013), five proprietary, undisclosed electrolyte additives were shown to increase cycle life compared to an electrolyte system with no or only one additive. Other studies have focused on performance gains from electrolyte systems containing three or four additives as described in U.S. 2017/0025706. However, researchers typically do not understand the interaction between different additives that allow them to work together synergistically with the electrolyte and specific positive and negative electrodes. Thus, the composition of additive blends of certain systems is often based on trial and error and cannot be predicted beforehand.”

Tesla’s solution only uses two additives, which reduces cost and complexity, and Dahn’s team appears to have a hold on the overall impact they have on the battery.

They claim it “reduces costs, enhances performance and lifetime of Li-ion batteries”:

Like in the previously released test results, the patent application, which is called Novel Battery Systems Based on Two-Additive Electrolyte Systems Including 1,2,6-oxodithiane-2,2,6,6-tetraoxide, shows results of battery cell prototype tests with higher longevity and capacity retention than usual: 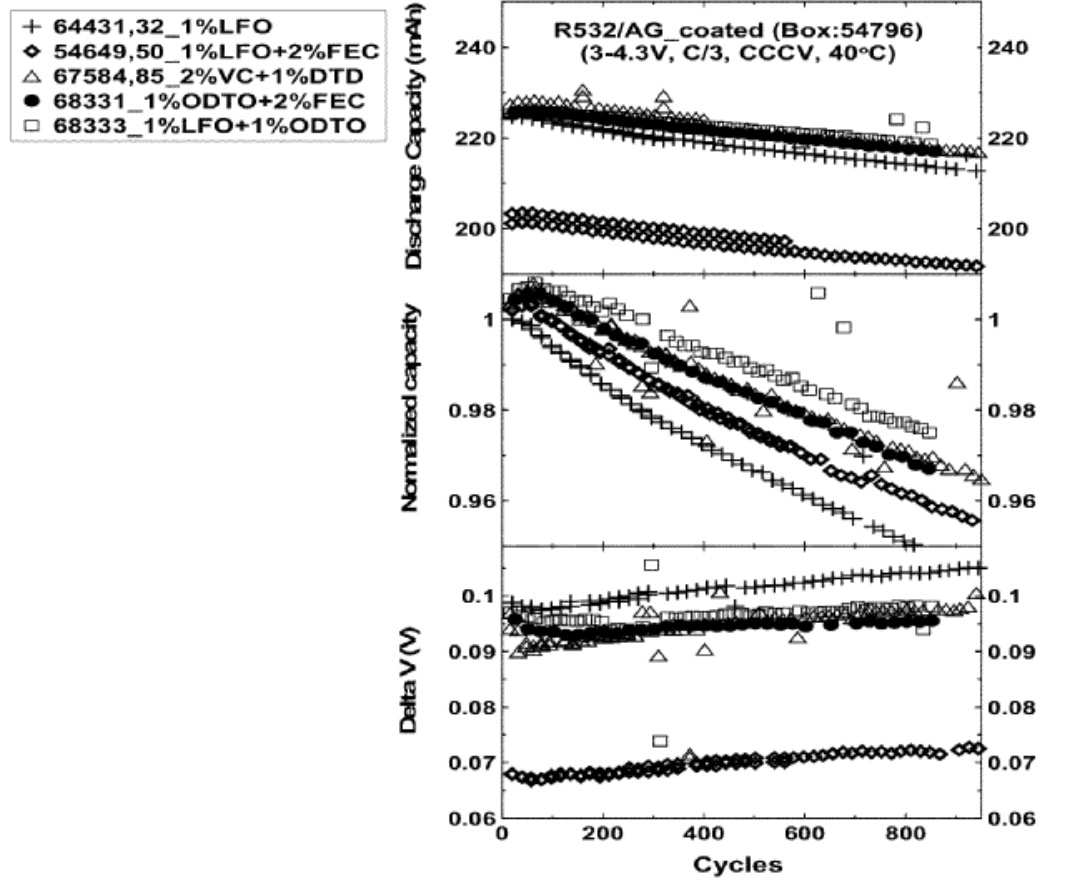 The details of this new battery cell come as we recently learned that Tesla is working to build its own cell manufacturing line.

Earlier this year, Tesla CEO Elon Musk said that they built Model 3 to last as long as a commercial truck, a million miles, and the battery modules should last between 300,000 miles and 500,000 miles.

However, the CEO claimed that Tesla has a new battery coming up next year that will last a million miles.

Like I said last week when we reported on the paper, I think this is a big deal.

This is a big deal. I have it on good authority that this is a game-changer for Tesla and EVs in general. When you combine that with Tesla moving to manufacture its own cells, things are getting exciting $TSLA $TSLAQ https://t.co/zi0XooMESL

Now Tesla is also filing a patent based on the same research.

While companies don’t always end up commercializing technologies that they patent, I think this is not one of those cases.

I think this will definitely make it into Tesla’s stationary energy storage product at least and likely also make it into its vehicles eventually.