Audi unveiled a new electric off-roader concept at the Frankfurt Auto Show today, and it looks like it should be a Mars rover.

The concept vehicle is called AI:TRAIL, and Audi uses it to communicate its vision of a future vehicle segment where a vehicle would drive autonomously on the road and then could be used as an off-road vehicle with driver-assist features.

Marc Lichte, Audi’s head of design, describes the use case:

With the AI:TRAIL, we are showing an off-road concept with an emissions-free electric drive for an innovative driving experience away from paved roads. Consistent with this, we designed a monolithic basic vehicle body with maximum glazing to create an intense connection to the surroundings. A concept for sustainable mobility on demand.

Combined with an extensively glazed cabin, it results in a spaceship or Mars rover look:

The interior is somewhat minimalist with not many visible controls.

Audi says that the focus was on giving the driver and passenger a great view around the vehicle.

The automaker describes the interior:

The interior of the Audi AI:TRAIL is tidy and spacious, and it has just a few visible control elements. There are two comfortable-looking, almost delicate seat shells in the front row, both equipped with four-point seat belts. Light colors dominate the upper interior area down to the level of the seat cushion and the low dashboard. The openness to the outside world appears all the more present; the occupant’s eye is drawn to the large glass areas in the front and side sections and guided through the almost fully glazed roof.

Here are a few images of the Audi AI:TRAIL’s interior:

Beyond its level 4 self-driving capability on the road, the concept is also equipped with other futuristic features.

For example, it has onboard autonomous drones that fly ahead of the vehicles to light up the road: 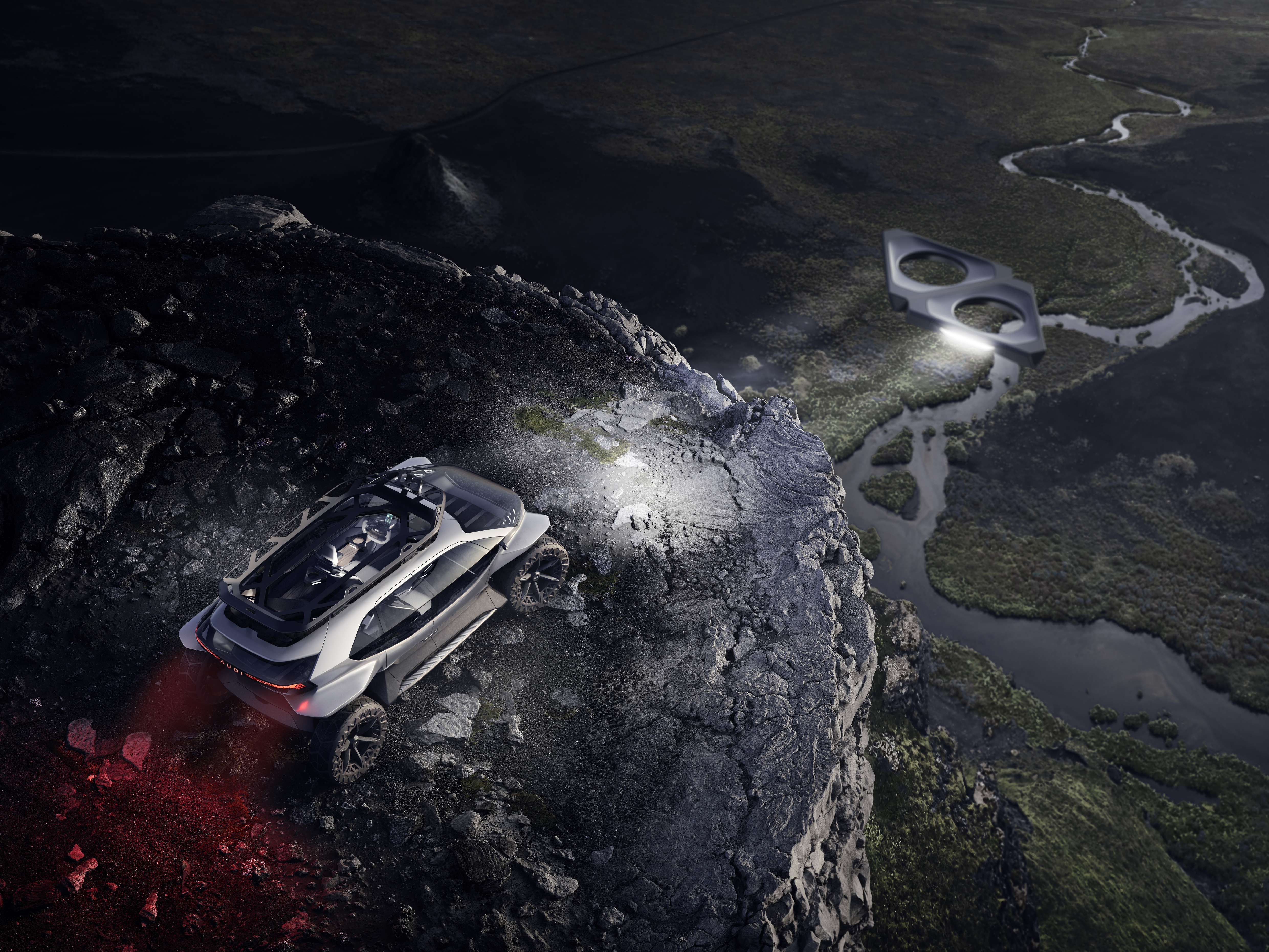 As for the performance specs, Audi is claiming some insane capability for an off-road electric vehicle.

The drivetrain consists of four electric motors, one for each wheel, with a total output of 320 kW and an impressive 1,000 Newton-meters (737.6 lb-ft) of torque.

With torque independent at each wheel, the vehicle has great stability and power, even on extremely uneven terrain.

In a video released by Audi, you can see some short footage of the prototype moving around:

As you can imagine, this is still very much a concept, and Audi didn’t announce any plans to bring this to market.

It would be awesome if they did, but we don’t expect them to.