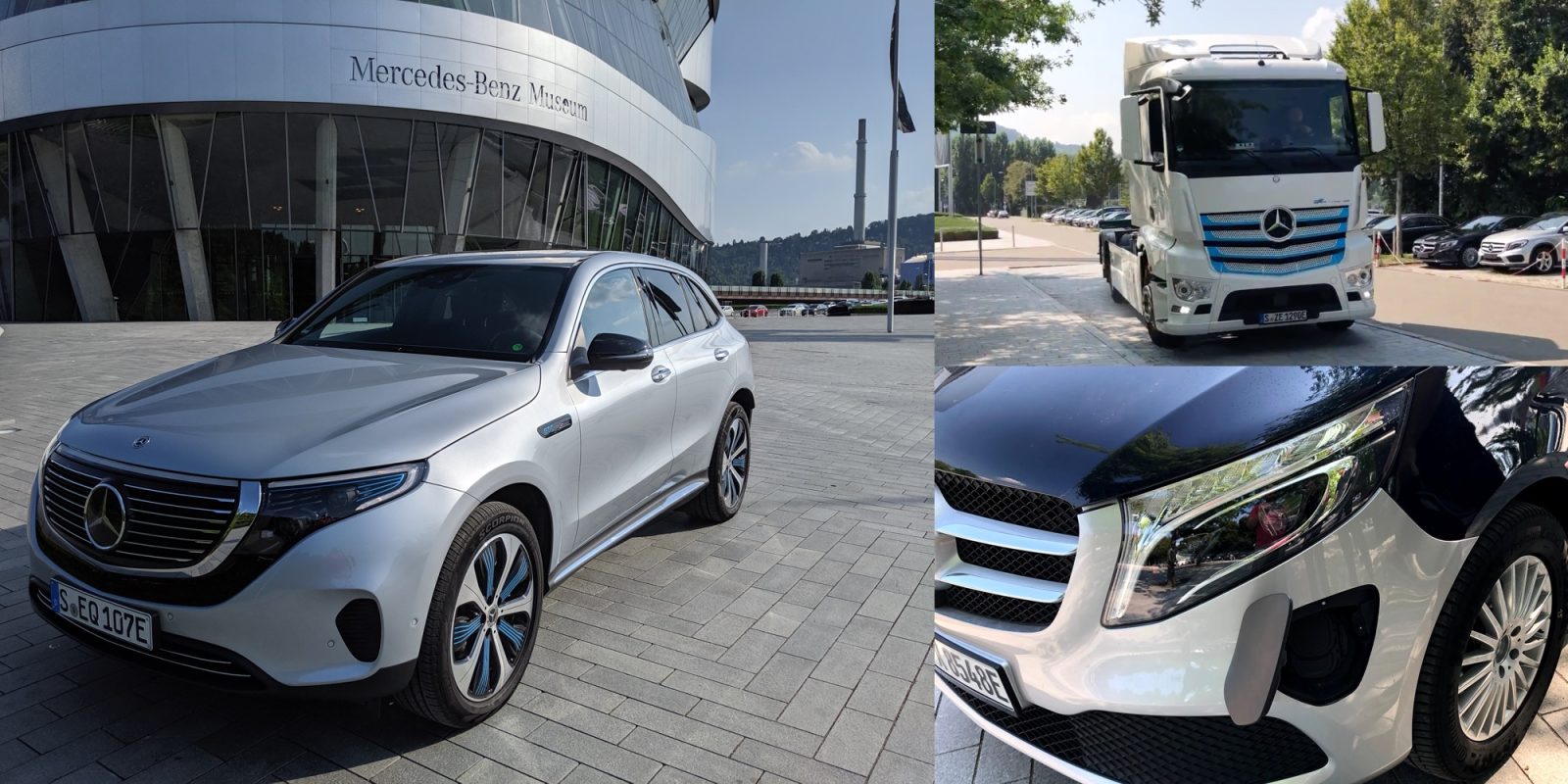 Mercedes was kind enough to invite Electrek out to their Stuttgart headquarters in Southern Germany to show off their growing portfolio of electric vehicles. Mercedes currently offers the eActros semi truck, newly announced EQV electric van, and of course their EQC crossover. We learned quite a bit…

The overwhelming takeaway from the day’s activities was that Mercedes is serious about electrification. In a series of meetings, executives discussed the years of work that Mercedes has been pursuing to get to electrification and that the limiting factor had always been making a “business case.”

Daimler is no stranger to electrification. It was an early partner with Tesla and the two companies continue to communicate. Tesla of course built the powertrain for the 2nd generation Electric Smart and Electric B-Series vehicles.

Daimler in turn rescued Tesla from bankruptcy with its $50 million/10% investment and made quite a bit of money on the holding which it later sold for $780 million.

Tesla CEO Elon Musk has said that if it hadn’t been for the investment, “Tesla would not exist.” Recently, he discussed the possibility of a joint Tesla/Daimler Sprinter Van with former Daimler executive and current Automotive President at Tesla leading the talks. Daimler has also said it is open to talks but nothing was announced and strategically, it is hard to imagine either company needing the other.

Now that large scale battery production and technology have brought the cost of batteries down while improving reliability and performance, a flood of new products is coming down the pike from Daimler.

Daimler has set up its own battery pack manufacturing facility in Stuttgart where it buys batteries on the open market and assembles them into packs for its vehicles. The company didn’t seem to care where the batteries were made although many want Europe to be a battery manufacturing center. However, many feel that if Europe subsidizes battery production, the industry will just crumble when subsidies are taken away, much like its attempt to encourage solar before the subsidies were withdrawn. Daimler is staying out of the fray.

The Mercedes EQC will be its first major consumer EV and from my brief time behind the wheel of the AWD crossover, it will be quite popular with Mercedes owners who expect a Mercedes experience. I won’t go into detail about the smooth driving experience but if that’s what you are looking for, Fred’s first drive experience is a great place to start. I wholeheartedly agree with his takes. In fact, for a Tesla owner like myself, the steering wheel was quite familiar.

The EQC is expected to drop into North America early next year while it is already on the streets in Europe.

We were one of the first journalists to get a ride in the EQV van and I can say that after driving the EQC, the EQV prototype we drove was a remarkably similar experience – in a good way.

Mercedes is already in the eTrucking business having announced its eActros electric semis would be delivered in small numbers. These vehicles are already out on the streets making deliveries. To be clear, these are not long haul vehicles, they are local delivery trucks.

The drive system comprises two electric motors located close to the rear-axle wheel hubs. These three-phase asynchronous motors are liquid-cooled and operate with a nominal voltage of 400 volts. They generate an output of 125 kW each, with maximum torque of 485 Nm each. The gearing ratios convert this into 11 000 Nm each, resulting in driving performance on a par with that of a diesel truck.

The maximum permissible axle load stands at the usual 11.5 tonnes. The energy for a range of up to 200 km is provided by two lithium-ion batteries with an output of 240 kWh.

Again my takeaway centered on how the drivetrain made such a big difference in the experience. With smooth powerful acceleration, regenerative brakes (or ‘recuperation’ in local parlance) the trucking experience is totally different. I was actually getting sleepy on our ride because it was so smooth and quiet.

Thanks @llsethj of @ElectrekCo for visiting @MB_Museum just now for an exchange on vehicle technology — but more importantly a drive with the all-electric eActros #MercedesBenz #futureofmobility pic.twitter.com/dXRr2maGNI

Compare that with the loud, stinky diesel that emanates from today’s trucks as they grind slowly through their gears gaining speed and loudly downshifting as they brake. It is a totally different experience.

Mercedes believes that this experience will be much better not only on the environment but also on drivers who will be less stressed and theoretically safer while driving electrics.

With the launch of its own EQC Crossover, EQV Van, and its eActros line, Mercedes is showing it is finally serious about EVs. Not just electric vehicles it makes with others or limited run concept vehicles meant for its (incredible, pictured below) museum. The excitement inside the company is palpable.

However, Mercedes is still hamstrung by its bean counters who are very specific about what product lines they feel are ready to be electrified. On more than one occasion I’ve been struck by the frustration that Mercedes employees felt by the need to be profitable at every quarter. It is hard to compete with startups and companies like Tesla that can delay profits out for years without shareholder backlash.

But because Tesla and other EV startups have encroached on their luxury turf, Mercedes is now willing to bet on electric. And that’s exciting and important because Daimler makes amazing vehicles and has incredible reach. And the faster their vehicles become electric, the better off we all are.