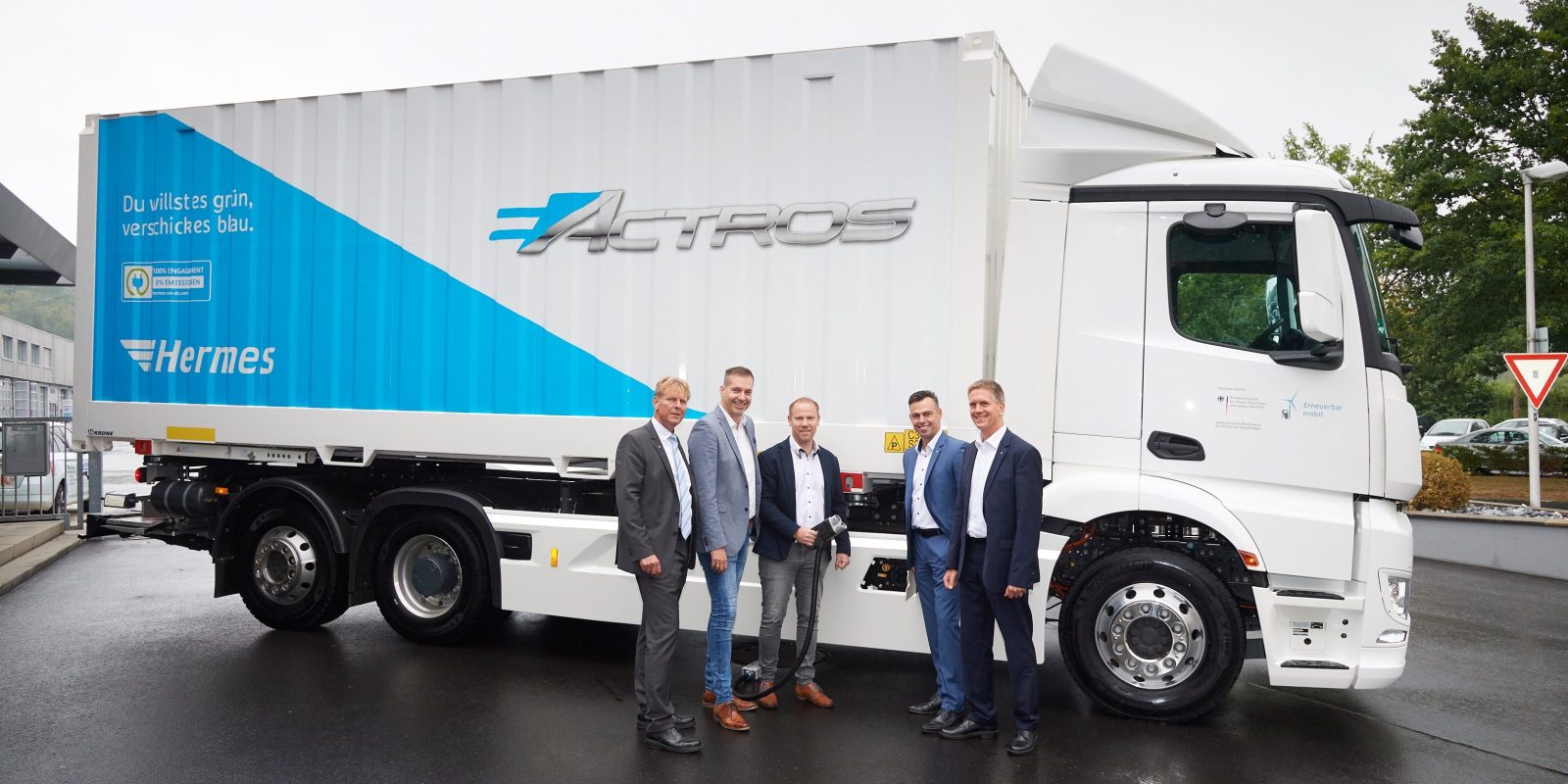 The Mercedes-Benz eActros, one of Daimler’s many electric truck efforts, is now in the hands of customers for the first time.

Hermes took delivery of the first 10 eActros all-electric heavy-duty trucks and it will test them for the next 2 years.

Stefan Buchner, Head of Mercedes-Benz Trucks, commented about the delivery of the new electric trucks:

“The practical trials with the eActros are an important milestone on the way to series production. We want to use the comprehensive findings to realise electric trucks for inner-city distribution from 2021.”

Hermes, Germany’s largest independent logistics company, has already been working with Daimler on several electrification efforts, including a contract for a fleet of 1,500 all-electric Mercedes-Benz vans.

“Electromobility is an essential component of our sustainability strategy. We have set ourselves the ambitious goal of making our deliveries in all urban centres in Germany emission-free by 2025. Alongside the use of battery-electric vans over the last mile, the gradual electrification of heavy-duty distribution and feeder transport is an important topic for us. We are working together closely with Mercedes-Benz Trucks in this area. Both the technological concept of the eActros and the end-to-end service approach plus the level of advice have impressed us.”

As we previously reported, Daimler is building two variants of the eActros with a gross vehicle weight of 18 or 25 tonnes.

The drive system comprises two electric motors located close to the rear-axle wheel hubs. These three-phase asynchronous motors are liquid-cooled and operate with a nominal voltage of 400 volts. They generate an output of 125 kW each, with maximum torque of 485 Nm each. The gearing ratios convert this into 11 000 Nm each, resulting in driving performance on a par with that of a diesel truck.

The maximum permissible axle load stands at the usual 11.5 tonnes. The energy for a range of up to 200 km is provided by two lithium-ion batteries with an output of 240 kWh.

These are the same battery packs that have been used by EvoBus GmbH. In term of capacity, it’s a significant powertrain, but it can only enable about 125 miles of range in a vehicle of this size and weight.

As for charging capacity, Daimler is only talking about “20 to 80 kW charge rates”, which can charge the vehicle in “3 to 11 hours.”

Daimler says that the vehicle is geared toward urban distribution and Hermes will test them for that purpose.

They will test “a 25-tonner mainly on a 50 km long route between Bad Hersfeld and the Hermes logistics Center in Friedewald, northern Hessia.

While short, the route passes through “hilly landscape and is covered six to eight times each day.”

Daimler says that Hermes is the first of 20 “test customers” and that further customer handovers will follow before the end of the year.