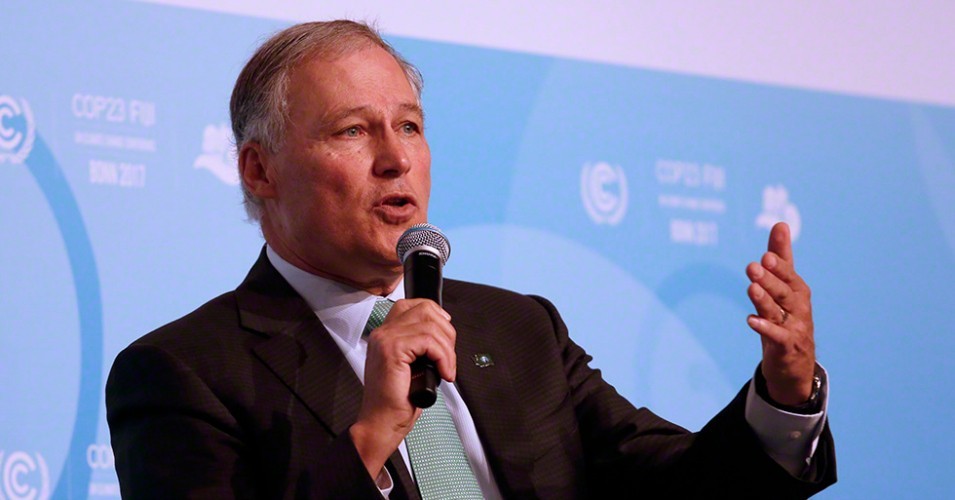 Washington State governor and clean energy advocate Jay Inslee dropped out of the US presidential race last night. He didn’t qualify for the CNN town hall on climate or the presidential debate in September.

Combatting climate change with green energy was Inslee’s top issue. According to NPR:

He proposed a 10-year action plan to, according to his campaign website, “achieve 100% clean electricity, 100% zero-emission new vehicles, and 100% zero-carbon new buildings.”

“[Climate change] does call for a president to make this Job 1, because if it is not Job 1, it won’t get done,” Inslee told NPR in March. “We have to understand if we don’t solve the climate crisis, it will prevent us from dealing with all of our other hopes and challenges.”

While Inslee won’t be able to lead on green energy initiatives at the federal level, Washington State and its cities continue to make positive, impactful changes. For example, Seattle City Council passed its own Green New Deal on August 12.

Hopefully, Inslee’s push will encourage other presidential candidates to prioritize sustainable energy. Or, as he put it, to “change the entire national dialogue” on climate change.

Donald Trump announced that he was interested in buying Greenland. Greenland is an autonomous Danish dependent territory. Danish prime minister Mette Frederiksen dismissed the idea as “absurd.” So Trump canceled his trip to Denmark and called Frederiksen “nasty.”

But Frederiksen moved on and turned her attention to pressing green energy issues. Today, she, along with Crown Prince Frederik and Climate, Energy and Utilities Minister Dan Jørgensen, launched Denmark’s largest offshore wind farm. According to Energy Live News:

The Horns Rev 3 project consists of 49 turbines and has a total capacity of 407 MW, expected to generate enough electricity to power 425,000 households. It will support Denmark’s low carbon ambitions and boost wind power production in the country by 12%.

It’s now the largest offshore wind farm in Scandinavia. Denmark is a world leader in wind energy production and other methods of green energy, and Greenland can use all the sustainability initiatives it can get. (Greenland’s ice is melting, by the way. Hugely.)

E.ON, an electric utility company headquartered in Essen, Germany, is enormous. It operates in more than 30 countries and serves more than 33 million customers. So the energy giant raising two green bonds worth €1.5 billion ($1.66 billion) is a big step forward for advancing green energy. As Energy Live News explains:

The bond issuance of €750 million [$831 million] each, maturing in August 2024 and February 2030 at rates of 0% and 0.35%, respectively, will fund sustainable infrastructure and energy efficiency projects.

A new study commissioned by the Propane Education & Research Council found that residential customers are increasingly willing to pay more for a zero net energy home. The survey was taken by 2,200 US residents who said they were soon-to-be purchasing, remodeling, or building a home. (Confession: I just bought a new house, it has solar panels and energy-efficient doors and windows, and it was totally worth it.)

Some highlights from the study, summarized by ACHR News, include: