Electric scooters certainly have a lot of advantages, yet one of their few downsides has always been the built-in (i.e. locked in) battery. But now with the Levy electric scooter, riders can finally remove their battery from the scooter to charge more conveniently and help mitigate theft. Plus it’s a pretty sweet looking scooter, in my opinion.

The first thing that jumped out at me about the Levy scooter was that it looks fairly different than the standard $399 Xiaomi M365 and its even cheaper generic cookie-cutter copies out there.

So I was definitely excited to get the chance to review the Levy electric scooter and add another notch on my scooter belt, so to speak.

Let’s take a look at the tech specs for this scooter to see how it stacks up. You’ll find them below right after my review video, which you should absolutely watch. 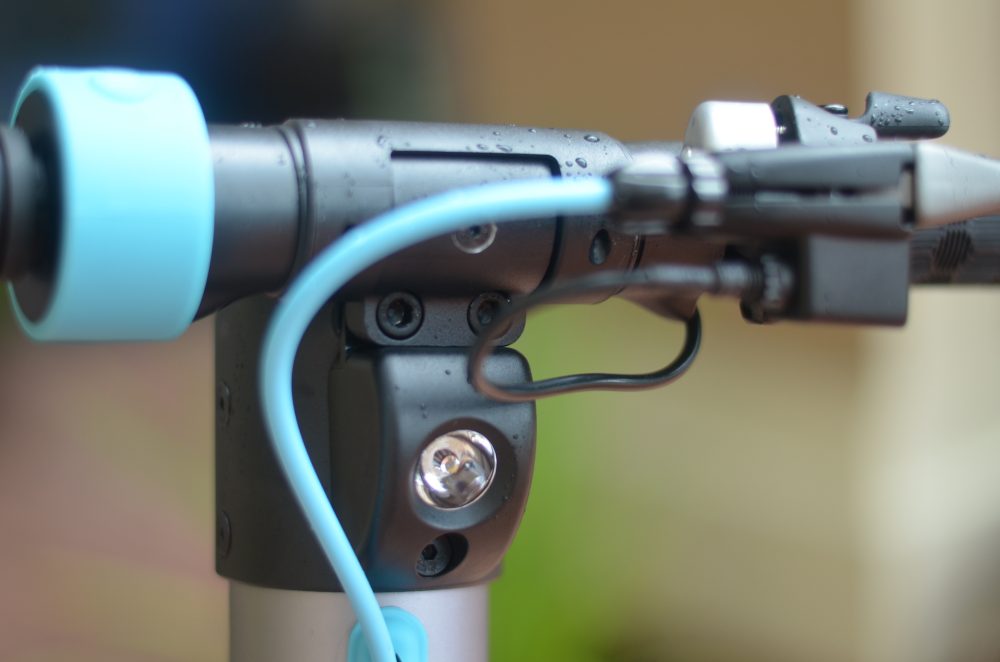 How does it compare?

Is it as strong as some heavy-duty, full suspension electric scooters like the popular Mercane WideWheel? No, but it’s also less than half the price at just $499. So for a budget scooter, it’s well put together.

The Levy scooters are strong enough that they are being used for fleet purposes around the country. They are also being used in a rental program in NYC similar to the ubiquitous Lime and Bird electric scooter sharing programs. In fact, Levy played a large role in lobbying for legalizing electric scooters in New York. The company even went as far as changing the L train symbol in subway stations into an electric scooter in a not-so-subtle suggestion to subway riders that a scooter might be a more pleasurable commuting experience.

Granted, Levy’s fleet and rental scooters are slightly modified versions of the consumer level scooter and have added options like GPS geofencing that is needed for fleets and rentals, but they are built on the same basic scooter.

So that should give you some indication right off the bat that the Levy isn’t your standard cheap scooter.

But how does the Levy ride?

It rides quite well, especially for a scooter without suspension.

The Levy electric scooter does feature pneumatic tires, which I really appreciate. So many scooters are moving to airless tires these days. While airless tires do give the advantage of no flats, they also make for a harsh ride on anything other than perfectly smooth, well-manicured paths.

With the air-filled tires on the Levy electric scooter, I can ride over bricks and sidewalk cracks without worrying about my teeth shaking out of my skull.

You’ll still feel the vibrations on uneven surfaces, but it’s more like standing on a vibrating massage chair than standing on a rock tumbler.

The pull on the Levy is also very nice. You can feel the 700 W peak motor really pulling hard when you accelerate. This still isn’t going to be a huge hill climber, but it’s got the power to tackle smaller hills without loosing too much speed.

The lights are decently bright, but you’re not going to blind anyone, that’s for sure. You’ll certainly be visible at night, but I would have liked the tail light to be a tad bit brighter. It works fine though, and I’m probably just being picky. No one is going to miss seeing it. 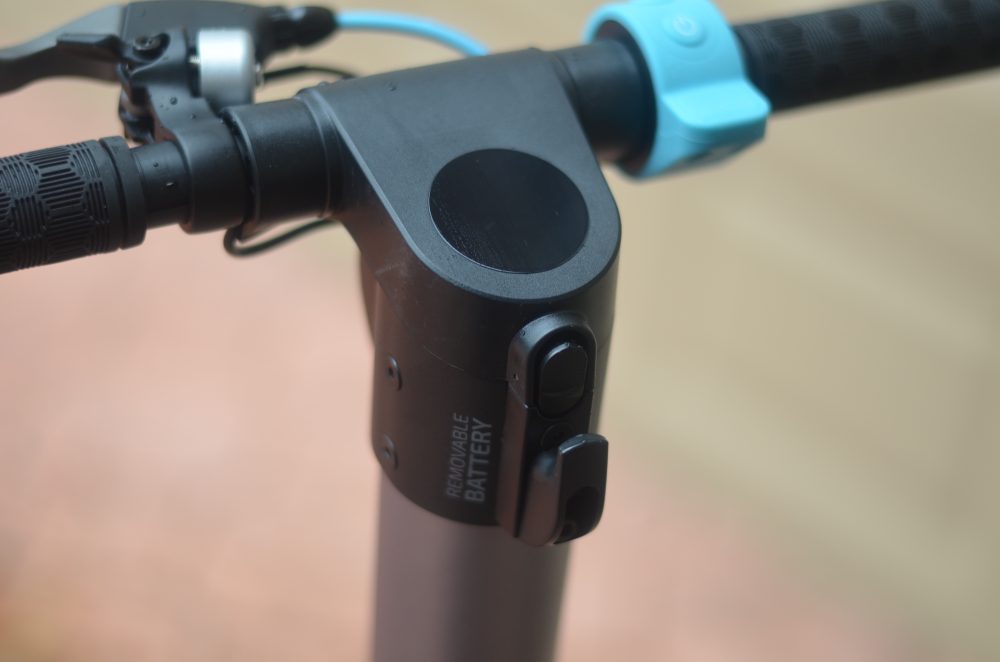 Why is the removable battery a big deal?

Without a doubt though, my favorite part of the Levy electric scooter is the removable battery. The display lid pops up and you can slide the battery right out of the top of the waterproof stem enclosure.

This offers a couple of big benefits. First, you can leave your scooter in the garage, bike rack, lobby, or anywhere else while carrying just the battery into your apartment, home, or office to charge more conveniently. No need to carry the whole scooter somewhere to charge. Just toss a good U-lock around the deck and your scooter will be there when you come back.

Next, you can go further by carrying a spare battery. For $139, Levy will sell you a spare battery pack. The dang thing only weighs a couple of pounds — just toss it in your backpack and forget about it. Then if you’re getting low on charge, swap it in. No more range anxiety! While the scooter advertises 15 mi (25 km) of range in ECO mode, you’ll realistically get closer to 8-10 miles (13-16 km) of range if you ride the scooter hard. So having a second battery is a nice addition.

Lastly, the removable battery helps mitigate theft, or at least take some of the ouch out of e-scooter theft. The battery is usually the single most valuable part of any electric vehicle. When e-bikes, e-scooters, or e-anythings get stolen, if you still have the battery then replacing the vehicle costs less. And the vehicle is less likely to get stolen if it can’t be ridden away easily (you know, since it doesn’t turn on without a battery). That won’t stop someone from carrying it off, but they won’t make as quick of a getaway. No one runs quickly while hauling around twenty-something pounds of electric scooter.

I’ve personally had an e-bike stolen before. And while I certainly felt pissed and violated, I was glad that my $400 and 1 kWh battery was still safely in my living room at the time.

There’s just one downside to the removable battery. If you’re parking the scooter in public, you kind of have to remove the battery. If someone sees a Levy scooter and knows what it is, they’ll know the battery is removable. And then they can just jack your battery if you leave it there unattended. There’s no keyed lock like on most electric bicycles. The good news is that the battery is small and easy to take with you. The bad news is you better remember to actually do it.

But like most electric scooters, the entire scooter is light enough that you won’t often need to park it in public, you could usually just take the scooter inside your destination with you. 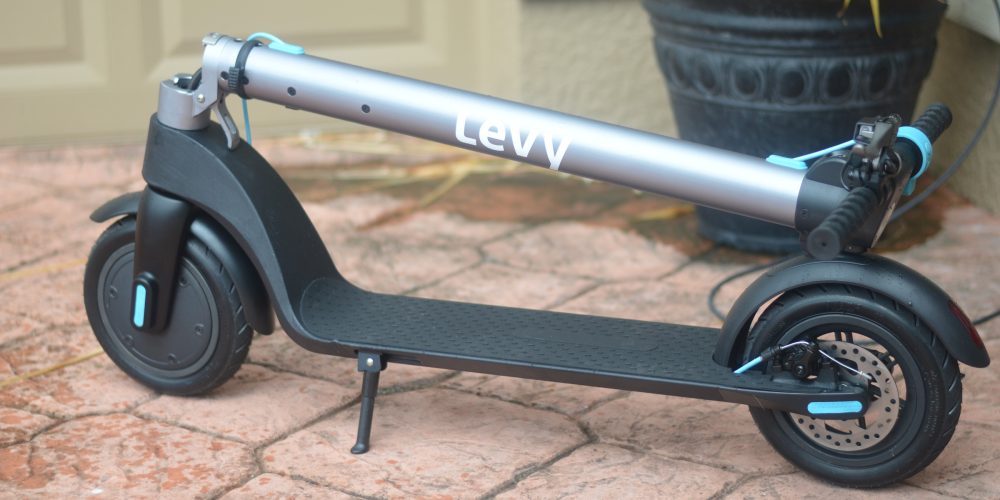 At the end of the day…

At the end of the day, I’d call the Levy electric scooter a definite winner.

It’s a great looking scooter that stands out from the rest of the pack.

It performs well with good acceleration and comfortable riding.

And it has that awesome swappable battery that almost no other scooter offers.

I’ve been very happy with the scooter and I think that it’s a great deal at just $499. There are many, many more electric scooters out there that cost more and don’t give you these features. I would have expected the Levy to cost at least $600 if not more, considering others in that price range. So compared to other scooters in the $500 range, the Levy electric scooter is a great deal.

What do you think of the Levy electric scooter? Let us know in the comments below!