Teslastics launches companion app to track use of your Tesla, battery health, and more

Teslastics has launched as an interesting new companion app to track the use of your Tesla vehicles, battery health, and more.

There are a few third-party Tesla apps out there using Tesla’s unofficial API.

I have mostly stayed away from them for two main reasons:

But Marc Pujol, the developer behind Teslastics, addressed those two issues with his app.

He explained that when users provide their Tesla Account email and password, the app generates a token and only the token is saved, not the credentials.

That’s the easiest way to sign up with Teslastics, but if users know how to generate their own token, they can also supply it and Teslastics will never have your login information.

All the data is also stored in the Google Cloud and it is only accessible to the user.

As for the vampire drain issue, Pujol explained in an email to Electrek:

“Vampire drain is caused if some service is always polling the car so it can’t go to sleep. To prevent that, we poll the car this way: We poll the car every 30 seconds while driving or every 2 minutes while charging. After that, we just keep polling for about 30 minutes (to catch the following drive if you stopped for a drink, for example).  After that period, Teslastics stops polling the car for about 12 minutes to let the car go to sleep. It repeats that again and again until the car goes to sleep or it starts driving/charging again. Once sleeping, Teslastics will never wake up the car. It will only be checking twice a minute if it is still sleeping or not.”

That convinced me to try a third-party Tesla app for the first time.

I have been using it for my Model 3 over the last few weeks and I’ve found it very useful. It’s actually so feature-rich that I feel like I have barely scratched the surface so far.

There are many different reasons to use Teslastics.

For example, you can simply track all your travels with your Tesla with a daily summary. Here’s an example from my drives yesterday: 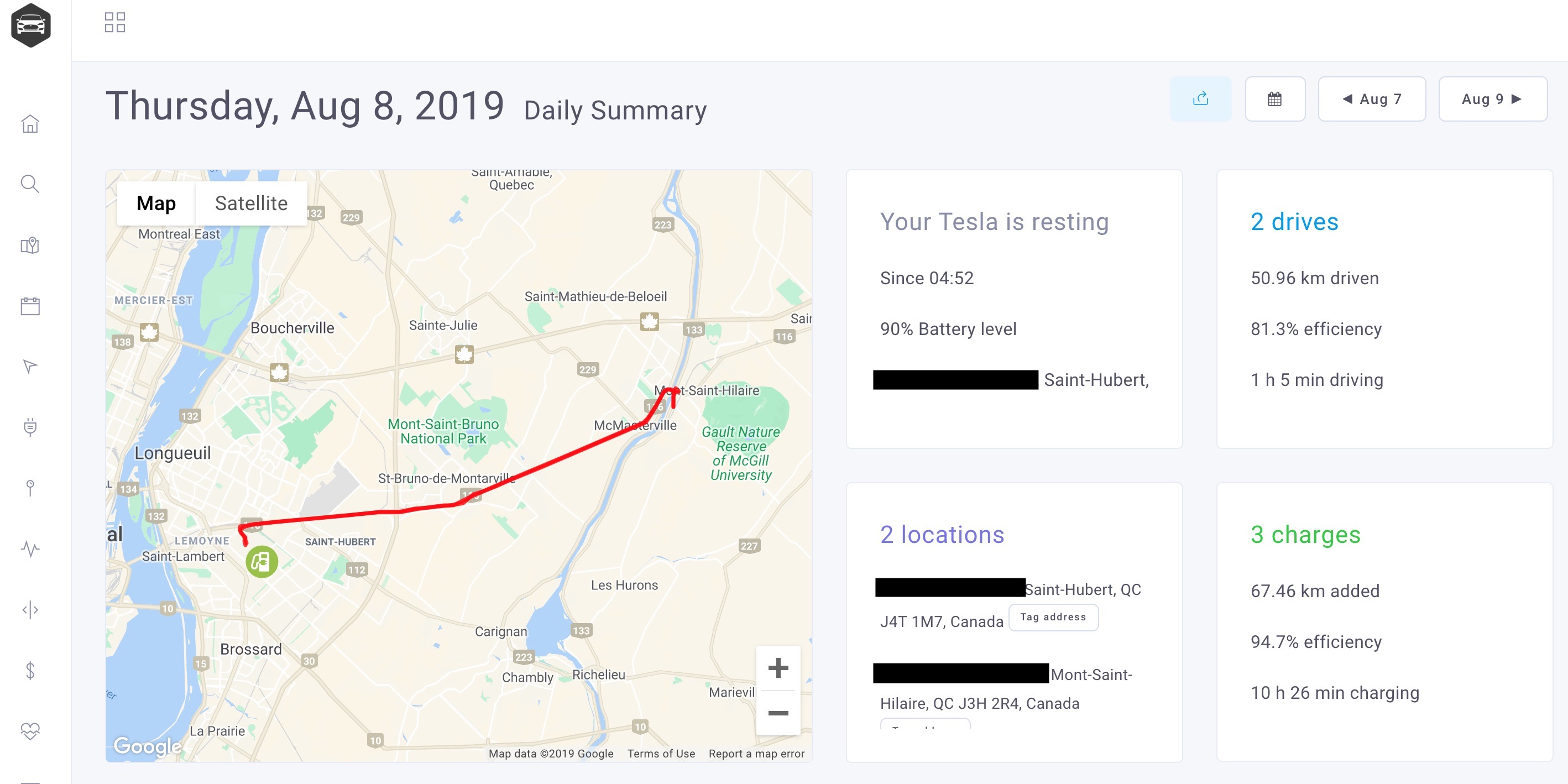 From there, you can dive into a lot more data about specific trips.

Here’s an example from a trip to Quebec City I did last week:

You can clearly see my efficiency being down and my actual range off the ideal range at the begining of the trip because I was driving fast.

At the end, the efficiency went way up when we slowed down and let the inside temperature go up.

Teslastics also keeps track of your most efficient drives as well as your charging efficiency.

Those are the main features of the app, but there are aslo some other useful features like tracking battery health and software updates:

One of my favorite features, although it’s not particularly useful but fun, is a heatmap of all your travels with your Tesla vehicle:

I’ve been using a free trial for the last few weeks, but I find myself using it often enough that I think it might be worth the $4 per month, which is not exactly cheap.

You can use the Electrek referral code to sign up to Teslastics with a month-long free trial and see for yourself if it’s worth it.