Tesla Model 3 is adding another 5-star safety rating to its collection — this time from the Australasian New Car Assessment Program (ANCAP).

With Model 3, Tesla achieved a perfect 5-star safety rating in every category from the NHTSA last year and earlier this year, the electric car also came out of the European New Car Assessment Programme (Euro NCAP) with impressive results — even setting a ‘new safety technology benchmark’.

Now ANCAP, the Australian/New Zealand NCAP released their own rating and they came to a very similar conclusion as the Euro NCAP.

Model 3 scored the same in every category except in ‘child occupant protection’ where ANCAP gave it one more point: 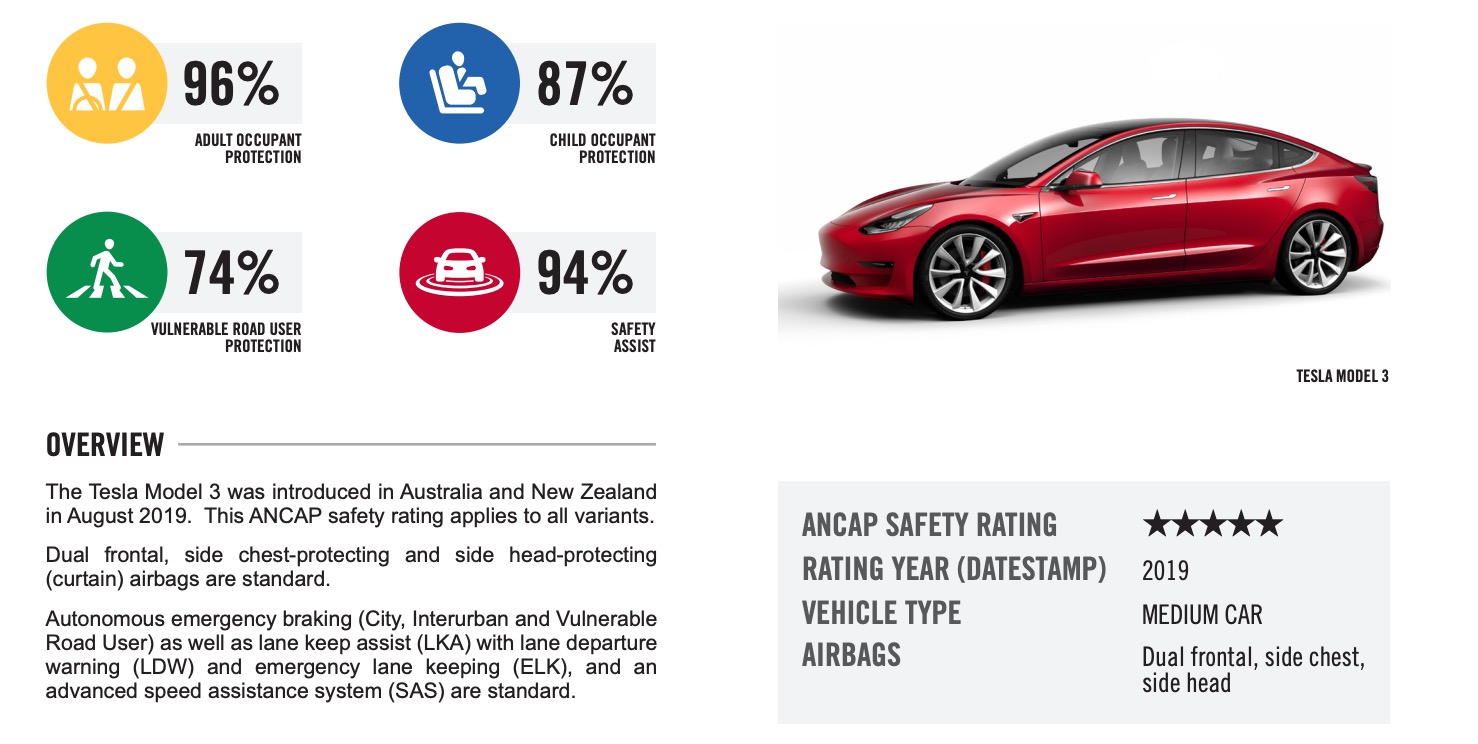 ANCAP noted in their safety report about the Model 3:

“A score of 96% was achieved by the Tesla Model 3 for Adult Occupant Protection with full points achieved for the driver in three of four destructive crash tests. Full points were also scored by the front passenger in the frontal offset test which simulates a head-on crash. Maximum points were scored for child occupants in the side impact test.”

It looks like ANCAP used data from the same crash tests as Euro NCAP based on this video that they released:

“This is an impressive result, and great to see electric vehicles continuing to prioritise safety. It is encouraging to see Tesla give equal attention to the active safety systems and technologies on board as well as the safety fundamentals through the structure and restraints.”

As we noted following the release of the Euro NCAP results, if you can look past a lot of the noise around Tesla crashes and fires, it’s clear that the company cares deeply about safety and it shows in the safety test results.

This new rating is just the latest in a series of safety tests that Tesla successfully completed.

Like in the previous report, they interestingly highlighted the fact that Tesla managed to take advantage of the safety benefits of electric vehicles.

Things like a large battery pack on the floor lowering the center of gravity and improving the structural strength.

The lack of an engine in the front also results in a bigger frontal crumple zone.

These things are other advantages of electric vehicles that people don’t talk about a lot, but they can literally be lifesaving.