How do you turn Honda’s cute little 125cc Grom motorcycle into a race bike? By dumping the engine and swapping in an electric motor and batteries, of course! Check out the aptly-named Electrobraap channel as they take an electric Honda Grom for its maiden ride.

In place of the standard 125cc Honda engine, the Grom was gifted a power train from an Alta Motors Redshift electric motorcycle. Alta was a popular California-based electric dirt bike company that tragically shuttered operations last year amid financial difficulties.

The Alta Redshift’s motor, controller and batteries had to be modified to integrate into the Honda Grom, including custom fabrication for the unique sprocket splines at the motor.

Notice the giant sprocket on the rear wheel as well, which could almost double as a run-flat! While this was just the maiden run, the team is already looking at a larger rear tire to give more room on left turns and allow the bike to scrape peg before chain. 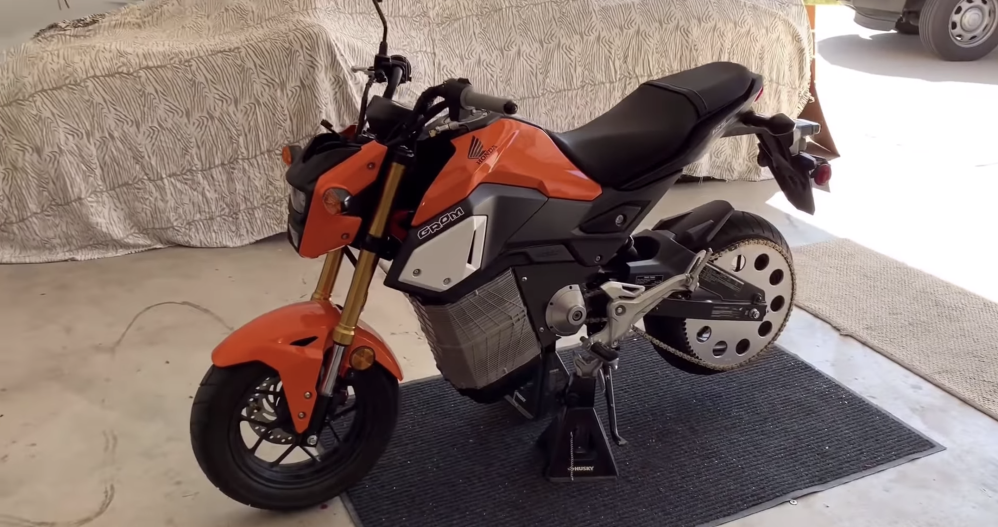 On our own small-wheel Grom-styled electric motorcycle, the $2,495 CSC City Slicker electric motorcycle, a belt and pulley on the rear wheel offer nice torque without the extreme chain noise of this electric Honda Grom. With 40+ kW of power, the team might have felt more comfortable with the chain kit on this conversion.

Keep in mind that a stock Honda Grom is pushing somewhere closer to 8 hp (6 kW). That means the electric conversion increased the Grom’s power by around 600%. Not too shabby!

Check out the video of the shakedown run below.

I’m personally working on my own Honda motorcycle electric conversion, though my bike is a bit different.

It’s a 1969 Honda Sports Cub with a 50cc engine. I’ll be replacing the original gas engine with a 5 kW rear hub motor from EM3EV and a 72 V DC battery system.

More on that to follow here on Electrek soon, so keep checking back!

In the meantime, we can hope for more factory original electric motorcycles from Honda. They’ve already unveiled a few concepts, including an electric version of the Honda CRF450 earlier this year.  And after Honda joined a consortium with Yamaha, Kawasaki and Suzuki to develop an electric motorcycle battery and charging standard, we should expect to see more developments coming out of Japan soon!