States in the Southwest US tend to have better solar resources and higher capacity factors than those in the rest of the country, the US Energy Information Administration notes.

States at similar latitudes in the Southeast, including Georgia and North Carolina — the latter of which has the second highest installed solar capacity in the US, only trailing California — didn’t measure up in capacity factor. And as you might expect, states in the Northeast fell behind those Southeast states.

The EIA map below shows the direct normal irradiance across the country, with the Southwest leading the way. There’s still an incredible amount of untapped potential in the region, especially in New Mexico. 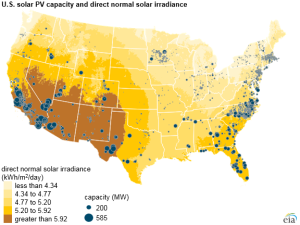 A French energy plan released last year would see the country go from zero to 5 GW in offshore wind capacity by 2028, which would be about a 500 MW-per year pace. But dropping costs and an urge to get more power from renewables already has France increasing its target.

France isn’t the only country looking to accelerate its targets. Tunisia is looking to increase foreign investment in its renewable energy sector, and the country’s industry and energy minister Slim Feriani said Wednesday that winners of its 500 MW solar tender will be announced in September.

Sixteen investors from around the world are looking to get in on the action, Reuters reports. Feriani expects solar energy production could begin as soon as a year after the tender winners are announced. He said,

“The tender will be a game-changer because we will boost the production of energy in Tunisia through environmentally friendly energy. This is the way the world goes.”

Tunisia has only built about 300 MW of renewable energy capacity in the last two decades, but the country has big plans going forward. The government wants to reach 3.5 GW of solar and wind by 2030, and Feriani now thinks the country may be able to hit those marks even earlier.

Feriani is recognizing the accelerating pace of the global energy transition — renewables are now cheaper than any other option for new power generation in most of the world, and more ambitious targets are certainly in play.

The project is made up of two portions: 12.5 MW of ground-mounted solar panels in a 40-acre space are joined by 11 MW of solar carports over three parking lots.

“This is a thrilling day for our company. This project represents a giant step toward becoming a net-zero carbon facility. Clean energy is right for the environment and our future, and we look forward to decades of environmental stewardship with our partner, KDC Solar.”